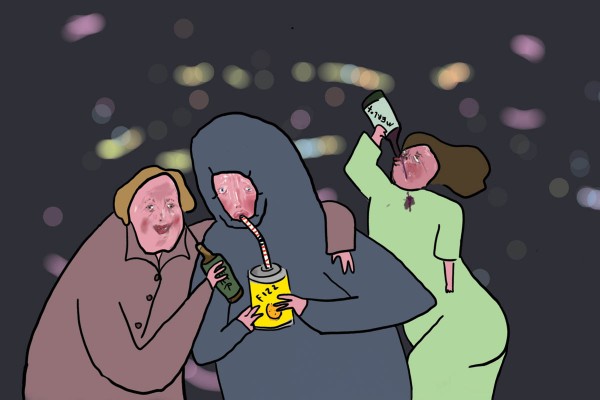 When Harmful Drinking is the Norm

Critic talks to students who gave up the piss

In late 2016, I decided to become one with wellness and stop drinking - I wanted to excel at uni, improve my health, and have more energy. I wasn’t some stereotypical rock-bottom drinker who had ruined relationships and career prospects by drinking, but the thought of a social situation without alcohol had become terrifying. So, I decided to quit drinking, and after a couple of weeks sober, I felt amazing - way more productive and energetic. I had made the right decision, and I was stoked.

I lasted only a few months before I was punched in the face with the realisation that I had barely been anywhere but home, work, and uni in several months. And I hadn’t had sex in that entire time. I had become completely socially withdrawn. So, I started drinking again in order to not become a crazy cat lady - and it felt like people were almost relieved that I had stopped being “that boring sober one”.

I’d had to choose between sobriety and a social life. I just couldn’t maintain a social life without alcohol - I even managed to keep myself drunk for 10 hours on graduation day to deal with family, crowds, stage fright, and photos. Unsurprisingly, my GPA also tanked when I resumed drinking.

Adam* started binge drinking every weekend in high school at around age 15 but feels that things really kicked off at uni. “The university lifestyle got me taking drugs every week and drinking/smoking weed every day.” After Adam left university and started earning more disposable income, his drinking “skyrocketed” to “around 10-15 per day on a quiet night at home, and around 30-40 depending on what was on that night”.

At one point, he was tossing back several shots of whisky each morning “just to maintain some semblance of control over my problems and to deal with the ‘hangxiety’”. When he had to lie about how much he was drinking to his doctor, he realised he “might have a serious problem”. Adam has been sober now for over 18 months

Like Adam, Liam* would also binge-drink “socially” at high school, and his drinking ramped up when he left home to come to Dunedin for uni. “I used to buy those six pack of Bavaria cans and smash that back most nights as well as some spirits.” Liam views uni drinking culture as “bad, but [just] the same as the drinking culture in the entirety of NZ. Nobody sees it as an issue and treats it like a toy rather than the drug that it is.”

It took Liam some time to realise that drinking was something that he needed to stop. “One day it clicked that it was actually doing a lot of damage.” He stopped drinking around 21 and says that while smoking marijuana and cigarettes helps socially, parties are still hard. “Even just being a sober driver in NZ is difficult … if you’re sober [at a party] it can be quite an ordeal.”

Hannah* is a 22-year-old postgrad student who quit drinking “towards the end of the 21st party season” when she started feeling “really low and inexplicably guilty” the morning after every drinking session. “I think it was my subconscious telling me that the way I was using alcohol was not a good thing.” It had been a big year of partying, and Hannah felt that her health was suffering. “I would constantly ditch working out anytime someone mentioned a few drinks, even on a Tuesday afternoon, and then skip workouts due to hangovers.”

Being social while sober has been a big change. “I avoid parties unless it’s something really important like a friend’s birthday. I won’t go to a random acquaintance’s dress-up party, but I get intense FOMO seeing photos online.” Despite the FOMO, Hannah feels that she has made stronger connections with the friends she cares most about. “I’ve had to get creative to be a fun friend without alcohol. Escape rooms, crafternoons, baking, hiking. [It’s] quality time with people I actually want to connect with.”

If you haven’t heard New Zealand’s proud drinking statistics, you’ve probably wagged a lot of school before moving to Milton (congratulations on marrying that "hot" cousin, by the way). Basically, this country is in big trouble with how we drink, despite the unintentionally hilarious TV ads created to steer us in the opposite direction (“You know I can’t grab your ghost chips”).

Last year, the University of Otago published an article entitled “Alcohol Abstinence not an Option for Students in Culture of Intoxication – Otago Academic,” highlighting a study by senior lecturer Dr. Kirsten Robertson focused on student perceptions of each other’s drinking behaviours and how that influences drinking culture at university. According to Robertson, moderate drinking is considered “illogical” (e.g. empty calories) and a threat to one’s social identity.

Robertson asked whether students actually experience freedom to abstain or drink responsibly in a climate of binge drinking.

She also found that having a next-day excuse (work, sports, exam) is one of the more acceptable ways for students to duck out of drinking without harsh judgment. With this in mind, Robertson believes that “there is a need to develop alternative cultures emphasising extracurricular activities to facilitate students’ agency to go against the norm”. Effectively: why don’t we do some things that aren’t getting wasted as well?

Underlying alcohol issues (like any dependence) are so multifaceted, and it almost seems like an impossible question to answer. As Adam puts it, “we’re deeply entrenched in a preloading, Send-It-To-Get-On-The-Level, binge-drinking culture that I’m unsure how we undo it.” Hannah believes that it starts from even earlier, suggesting a focus on helping people feel better about themselves from early on. “People drink a lot socially because they aren’t comfortable with themselves on some level, so an event centred around excessive drinking almost feels like mass escapism.”

According to the Ministry of Health New Zealand Health Survey 2018, hazardous drinking is much more prevalent in males than females, and Liam believes this is an echo of the “lad/bloke culture” where men feel like they are unable to show emotions that come off as weak and not “manly” for fear of being shunned by their peers. In Liam’s eyes, the solution is “more about building a culture where we can be more open with our feelings rather than just using something to take them away”.

Since making the choice to remain sober, Adam has been approached by friends, colleagues, gym buddies, and family members curious about his experiences with sobriety, as "they’ve all had moments where they have realised or recognised that their drinking habits were negatively affecting them”. Hannah also mentioned that from a health and beauty perspective, a few of her friends have joined her in sobriety in the quest to look and feel their best. “When I look back at all my nights out on the piss, I barely remember most of it. Yet when I look at the state of my health before I quit, it was evident. I just started thinking, why trash my body for something I don’t even remember anyway? That was good quitting logic for me.”

Adam believes the fact remains that in New Zealand "the culture around drinking is ubiquitous - nearly every social thing we do in this country after 11am involves having a drink before, during, or after it". Hannah agrees, referring to it as a "social situation where nobody wants to come out and say that it’s a problem, so it gets glossed over as good old-fashioned kiwiana”.

*Names have been changed.

If you would like to seek guidance or help regarding drinking, you can reach out to Student Health or OUSA Student Support or call the Alcohol Drug Helpline 0800 787 797.