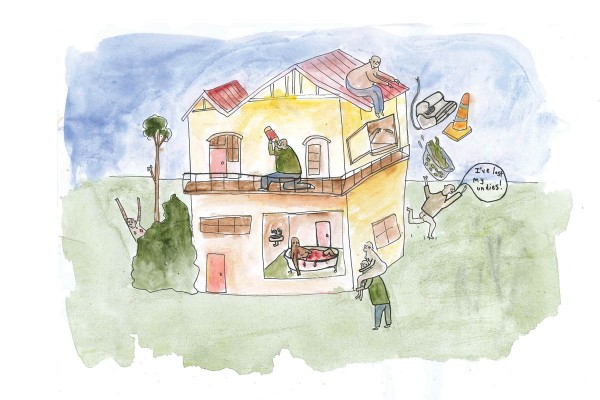 This One Time When I Was Munted...

North Dunedin is recognised as a city that goes quite hard – a reputation that has been earned year after year. Sure, not everyone drinks, but a lot of students get amongst it..

I decided to lurk around student flats to ask people about the drunkest and craziest stories that they’ve experienced during their time in Dunedin. All names have been changed to protect identity.

Maggie: I once shelved a cap up my asshole, vomited up, found my cap in my vomit and swallowed it down. I got with a fresher afterwards, kicked him out and let in another guy literally at the same time they saw each other pass the door. It’s been a big week.

Lisa: I did gear at 5AM and had yarns in the lounge in Re-O Week last year and again this year. In first year, during O Week, I got with someone on the stairs and in the bathtub. Then my SR walked in and saw blood from my period on the bath, it was like a bloodbath. She just like slowly walked out and shut the door.

Marge: In second year, I had sex with a guy and didn’t realise I had a tampon in, but he took it out and threw it on the floor. I also got with a virgin fresher.

Moe: I briefly popped into Melo Casa around 12AM and then back at 3AM. I ended up walking all the way back to mine early doors, and went to Moana Pool when it opened for a float around the lazy river.

Homer: I witnessed my friend peeing in the bushes by the Leith River in front of the clock tower. She lost her undies in the bush and was running around campus screaming while she was bare bottom, “I’ve lost my undies”. She didn’t want to get pee on her clothes, they were too nice.

Barney: At Hyde, I got caught with gear by the police and was going to be turned in, but got a warning instead. I wasn’t allowed but I sneaked in anyway and got chased by security with a friend. We outran them though so I still made it to Hyde. In O-Week, I dragged a road cone home one time, but was too drunk to realise I did it until I saw it the next day. I stole a bunch of alcohol from people’s flats once. I ran into prickly bushes and got massive cuts all over my thighs and legs during a Ball once. And I drank a whole bottle of spirits and a box at St Paddy’s with a decent amount of gear, then ended up at Botanic Gardens without realising where I was or who I was with.

Bart: I fell into a bush and got kicked out of the RnV Soundcheck gig even though I knew the bouncer.

Millhouse: Sometimes when I smoke I think there are insects like spiders crawling all over my head.

Sherri: I finished a whole bottle of vodka for my red card and I loved it. 10/10 recommend.

Nelson: I witnessed someone throwing out mull, a washing basket filled with vomit, a printer and a road cone out of someone else’s window, which landed onto the neighbour’s property. The road cone smashed the top of the roof and slid down, while the printer was so close to smashing their windows.

Terri: I was caught in bed with this guy but in his friend’s bed and so I sprinted down Castle Street completely naked. The guy I was with came running after me. He put me on his shoulders and took me home, but when I woke up the next morning, I had no clothes or keys and found my pants in a completely different guy’s room. My keys and everything else were in the guy’s friend’s room still. I also had sex with a tampon in when I was drunk. I forgot I had it in and had to go to Student Health to get it surgically removed.

There you have it, just an average night in Dunedin for some of our country’s future politicians.