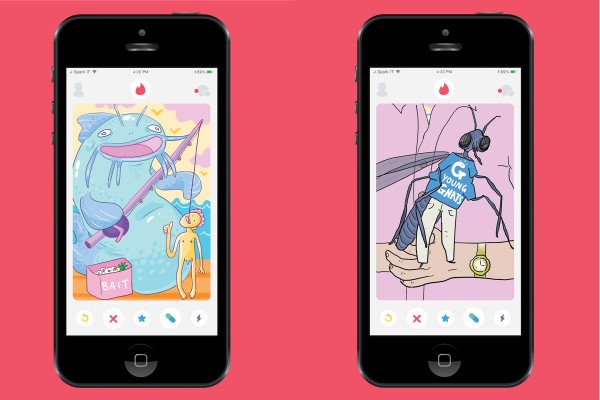 Drugs. Most people dabble in these illicit substances at some point, whether out of curiosity, thrill-seeking, peer pressure, or my personal favourite, questionable coping methods. That’s showbiz, baby.

But the days of buying drugs from some affable Seth Rogen-type in a dodgy alleyway are numbered. The world has changed; policing has become more vigilant, and millennials hate going outside. Not to mention that all the alleyways have been turned into cool hipster cafes, which honestly, is pretty great. RDC has great coffee.

So how do people get their drugs? The most common answer seems to be from friends or, more realistically, from friends of a friend. In Dunedin, where I can’t go to Night ‘n Day without running into some fucker from primary school, this solution doesn’t seem half bad. But what about if you don’t have any friends? Maybe you’re new to an area, or maybe you’re just socially awkward. Maybe you do have friends, but they’re all total squares and they’re not going to sell you crystal meth on the down low. This is where Tinder steps into the picture.

Tinder is the renowned dating app known for its spunky breeding ground of hook up culture, and also where your cousin met her now-boyfriend (I give them three months tops). Tinder is the place to be if you’re a man that likes to take pictures with fish/a drugged out tiger in South East Asia or a girl that loves Snapchat filters and being in photos with large groups of people (seriously, which fucking one are you?).

Tinder, as it turns out, also isn’t a half bad spot to acquire some freshly-squeezed drugs. Critic spoke to Charlotte* about her experiences using Tinder to acquire such drugs like weed, MDMA and heroin. She’d used Tinder mildly before, out of curiosity, before she realised that “there’s a lot of interesting people out there, and it’s a good resource to meet different crowds and people that supply different things”. At this point in the conversation she winked. My palms became sweaty.

Charlotte had been trying to get heroin for a while, asking around casually, but described herself as stuck. So, she jumped on Tinder, uploaded a few cute pictures of herself alongside the bio “Trying to pretend this is trainspotting #justhereforheroin” and waited. She wanted her overall feel to come across as a bit humorous, but still with the underlying plea for narcotics. Sort of an in-between profile where you could potentially meet your future husband with a “haha just joking (… unless?)!” vibe (which is what I do when people ask me why I don’t look like my Tinder photos) but also might attract the small fish of the New Zealand heroin industry.

She mostly swiped right for “people that looked like they could dabble, someone that looked a bit unusual. One person offered me acid and they were wearing those Thailand pants, you know the ones, tie dye and stuff. People that just looked a bit open.” Sorry Young Nats and Chino pants-wearers, that means you’re probably not in Charlotte’s key demographic - yet another young woman slips away from your slimy clutches.

When she matched with these scary liberals, Charlotte said she received a lot of messages asking if she was joking. When she reassured them that she was not, there were mixed reactions. She admits “there were a lot of liars, people would string me along for a while, saying ‘Yes, I have it, we should meet up’ and then wouldn’t. I didn’t go through with those meetings, but they would usually confess when they realised I was fully not joking.” Other reactions included “fuck you then” as well as concern for her wellbeing. A lot of men offered to give her weed and dick (my two most treasured possessions), but Charlotte persisted, searching for her elusive heroin fix. Eventually, after two weeks, she struck gold: a guy was willing to sell to her. Honestly, good men are so hard to come by these days.

After some initial chats to the guy about Wes Anderson and how he’d sourced the heroin, the young couple planned a meet-up: “We were gonna go see Isle of Dogs but we were too late, so we just drove around the city and would occasionally stop and have a little bump, kind of like micro-dosing until the high came on. In some ways, it was like a date I guess, but not really because there was nothing sexual, it was just friendly.” After her initial date, Charlotte continued to buy off the guy without having to hang out with him, buying various drugs from heroin and acid to MDMA. Eventually, after a delightful family intervention, she stopped seeing him, but she still speaks fondly of him to this day.

Looking back, she rates her experience using Tinder to buy drugs as largely positive, but one that comes with warnings to those wishing to replicate her experience. Firstly and most obviously, trying to buy drugs is illegal and so people should obviously be careful. Charlotte herself wasn’t worried at the time about police monitoring, though admits that people who matched with her were.

Aside from the obvious, she says that Tinder is only good for certain drugs, “When you can be sure of what it is, like weed because it looks like leaf, it can’t really go wrong. When it comes to MDMA or acid, probably buy from people you trust. In terms on acid on Tinder, people seem to be lying a lot more; I wasn’t sure if people were going to print off blotter paper and sell me 300 dollars of printed paper instead of drugs because its a stranger and you have no ties to them.” At this point in the interview I chuckled nervously, because I know if someone tried to sell me dried basil leaf I’d probably give them a fifty and sincerely thank them. But sure yeah, if you’re good at recognising drugs, you’ll be fine. Once again, Young Nats and Chino pants-wearers are unfairly discriminated against in our societal climate.

Overall, using Tinder for drugs isn’t the world’s worst idea. I use Tinder for validation, and the two are surprisingly similar; the highs last only a short time before you feel shit about yourself and yet again vow to avoid skinny white boys forever. However, if you are the kind of friendless individual that needs Tinder to buy drugs, maybe consider not taking drugs since, you know, you’re probably not in the best frame of mind. But you do you, boo. While you’re at it, try and find me a boyfriend.