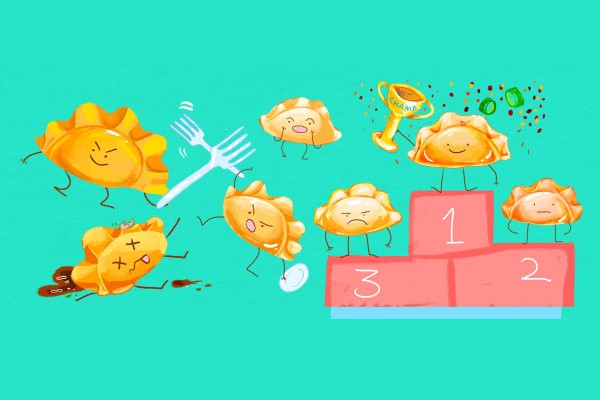 For your pleasure, but mainly for ours.

The Dumpling Lady aka The Artist Formerly Known As Rising Sun

Despite the heavy coverage in this year’s Critic, we are not actually sponsored by DL/TAFKARS, although we wish we were. This is a cheap and cheerful food truck on campus whose success can largely be attributed to the delightful woman who operates it. When I’m at DL/TAFKARS, spinning some yarns, the warmth of the dumplings box in my hands makes me almost forget about the planet’s rising sea levels and that god-awful GPA I carry from first year.

These dumplings come hot and steamy with a range of condiments that you can pop on. Personal fave is the chilli oil and sweet chilli combo. The pork dumplings are 6 for $6 or 12 for $10, they also do a special deal with 6 dumplings and a steamed bun for $8. Impeccable value. The dumplings themselves are really good in size, juicy and generously packed with filling. Sometimes the casings come away from the filling, but that’s fine and you shouldn’t care. It tastes bomb regardless. Just remember to bring your own fork with you because I hate people using the plastic ones.

Harry’s Kitchen is a wee gem on George Street where Japanese dishes are served alongside fries (best of both worlds?). You’ll see it packed out most days around lunchtime - and for good reason. The staff are smiley and friendly and the food comes out super quick. Take the small detour from campus one day and you’ll find 6 deep-fried pork dumplings for $5. Not bad. These were probably the smallest dumplings Critic tried in the review but they were cute and nicely laid out on a wee tray. The dumplings were perfect morsels of melt-in-your-mouth pork. Although I prefer my dumplings steamed, I will not hold that against Harry’s, as they were perfectly fried and crispy with a satisfying crunch. They also had a dipping sauce that slapped so hard I decided to drink the leftovers from the little saucer like the uncivilised cretin that I am. 20 seconds later I felt kind of sick, but that is my mistake and I will own it.

Oh, to be young and in love again. I wish I could go to this place again for the first time. Experience the salty crunch like a newborn baby fresh out of the world. I was blind but now I see. These dumplings are the perfect dumplings - panfried to a caramelised perfection fresh out of the flames. The filling is meaty and gorgeous, a dick for the ages. There’s a lot of it too, tenderly packed in by the elderly owner’s trembling fingers. The best thing is that after a first, hesitant bite (a lover is always nervous for the first kiss) the dumpling doesn’t fall apart. Rather, strong and proud, the dumpling retains its moist shape. It’s not overly doughy, moist or floppy, no no no. Each dumpling is a tender nipple coitus, ready for the plucking. Overall, all I can say is YUM. (Please hire me, Dish Magazine.) Seoul is closely located to campus and has a warm, inviting feel to warm the soul in these trying times. Oh baby.

Stepping into this place, one major flaw jumped out: there were no pan-fried dumplings. They offered deep-fried and boiled, so I opted for the boiled, but couldn’t help missing that sweet hard glaze that only a hot pan slicked with oil could offer me. That being said, the boiled dumplings were a nice salty treat. The filling was obviously freshly made - not frozen - and it was hot and warm in my small hands. The dumpling wrapper offered a stable eating environment that allowed me to polish off the savoury morsel in one or two bites. I felt seen. A nice pop of liquid in my mouth completed the dining experience. The atmosphere was mediocre, nothing to rave about and certainly not a place to bring your private-school friends. But, it was good food, done well, and at the end of the day, that counts for something. There’s nothing here to make this dumpling experience stand out - it wasn’t exceptionally cheap, beautifully presented or anything out of the ordinary, but it was honest and kind to me and for that I’ll always be grateful.

I was excited heading into this place; I heard it was usually pretty busy and I’d have to make a booking in order to secure a table. As I hate making phone calls, like any cool millennial, I’ll take some points off the overall experience. Also for 5 dumplings for $9, this was pretty fucking pricey. Again, some points off. I get that this was slightly more upmarket, but still, it hurt my pockets a bit (just kidding, my clothes don’t have pockets because fuck women’s clothing designers amirite). When the dumplings came, they were nice and crispy, but the overall quantity wasn’t enough to curb my gluttonous appetite. The combination of pork and cabbage was a tad underwhelming, as everyone knows that cabbage lacks flavour, texture, or about anything remotely interesting. I’d be interested in going here for Yum Cha, but I think dining in for an appetiser is a) expensive, b) too far away from Uni and c) a waste of everyone’s time. I’m sorry Papa Chou’s, I appreciate the hard work you’ve put in to the Dunedin dining scene ever since we lost The Asian, but your world and mine just don’t collide. You wear short skirts, I wear T-shirts. You’re cheer captain, and I’m on the bleachers.

A tie between DL/TAFKARS and Seoul: Korean Cuisine