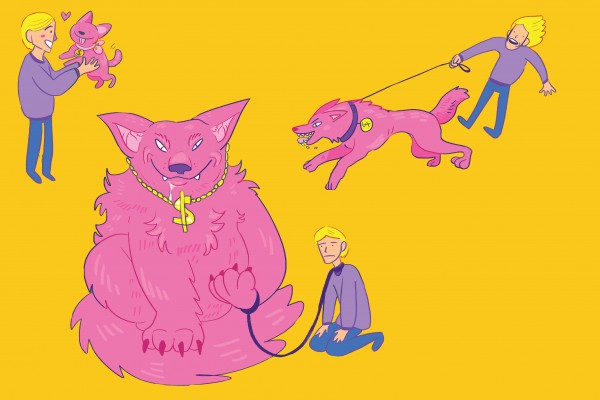 Out of sight, out of mind.

That’s how I found myself an additional $12K in the hole to IRD. A tale as old as time (the ’90s), many a former student will spin you a similar yarn. A yarn of how we all fucked off to Australia when National was elected in, in search of a better life. And a better life we found. Going from $10.50 an hour to $25 an hour was like winning the lottery. I’ll pay my student loan off with all this extra income, we would excitedly tell ourselves. But we didn’t. We spent that extra income on overseas travel, mediocre strippers, fine leather goods, and mimosas. It’s hard to pay back one’s student loan when one is so busy treating oneself.

The problem with student loan debt is that nobody tends to think of it as “real debt”. Since 1992, students have borrowed a total of $26.1 billion through the Student Loan Scheme. Those of us who actually understand the contract we are signing at age 17 or 18 tend to think of it like a higher tax bracket that we’ll endure after Uni, until it is paid off. And that’s exactly how most people deal with it, managing to pay theirs off on average within 5-8 years.

Except for those who go overseas after they graduate.

When you leave New Zealand for more than six months, the game changes for your student loan obligations. You get hit with interest, and you have to make a minimum annual repayment, depending on the size of your loan. According to Inland Revenue’s 2018 Student Loan Annual Report, of the borrowers with overdue payments that year, 74% were based overseas. Out of $1.3 billion in overdue student loan debt, a hefty 91% of it was owed by overseas-based borrowers.

One of those borrowers, Alysia, is a 34-year-old living in Perth, who has almost finished a building apprenticeship. She currently pays around AUD $300 per month on her “over $30K” student loan, noting that “it's basically just interest. It goes down a little, but it’s barely noticeable.” Alysia didn’t take much notice of her loan before leaving New Zealand, but knows that “it did go up significantly when I was ignoring it and hoping it would go away.”

Like most overseas-based borrowers with loans in arrears, Alysia adopted an out of sight, out of mind policy. “I just pushed it aside and tried not to think about it, because every time I did, it was stressful - thinking you have this massive debt sitting and waiting for you.”

Byravi said Inland Revenue at the time “really didn’t make it easy to pay off - a payment option of the website to transfer from your overseas account to the IRD would have been ideal.” (This option is now available through Orbit Remit). “Their website honestly looks as though it was created by a 4th form computing student in 1986.”

Inland Revenue have recently been trying to prevent these kinds of situations, by incorporating a “preventative assistance team” within its Student Loan Collections department. Their role is to awkwardly slide into your DMs with some sexy conversations about how you can avoid getting into trouble with your loan while you are overseas. Inland Revenue’s 2018 report states that “those borrowers who met their obligations more than doubled compared with new overseas-based borrowers from the previous year,” meaning they actually got some game in the chat department.

But is it too little too late?

For people like Alysia and Byravi: definitely. Approximately 17.9% of overseas borrowers are currently facing a student loan debt of more than $50,000, with 3.6% chained to more than $100,000 of debt. These high debts are mostly due to interest piling up on the original loans, plus non-payment penalties and interest on late payments. Inland Revenue’s report states that “the longer borrowers are out of New Zealand, the less engaged they are with their student loans. More than 74 percent of overseas-based borrowers’ default is more than two years old”.

Both Byravi and Alysia would have benefitted from Inland Revenue’s preventative assistance initiative much earlier. Alysia received intermittent statements - “I would get bundles of mail forwarded to me from my dad from the IRD,” while Byravi doesn’t remember much in the way of contact - “probably some automated emails that went directly into my junk email folder”.

Many overseas loan defaulters have been afraid to return to New Zealand, after Inland Revenue began taking action at borders, arresting those who were in default. A notable arrest was that of Ngatokotoru Puna, who was arrested at the airport in January 2016, over a $130,000 student loan debt. A March 2014 law amendment means that Inland Revenue can have an arrest warrant issued for those who are too far behind on repayments, which prevents them from leaving the country until they resolve the arrears.

Critic asked Gay Cavill of Inland Revenue about legal action. She said “The most serious action Inland Revenue could take against an overseas-based borrower is to apply for garnishee orders on overseas income, initiate bankruptcy procedures in an overseas court or commence an arrest warrant process if the borrower crosses the New Zealand border. However, these are very much options of last resort after all other attempts to negotiate with the borrower have failed.” Basically, they can take away some of your income before you even see the money, force bankruptcy upon you, or put a warrant out for your arrest.

Inland Revenue’s report shows that borrowers who remain in New Zealand have shorter repayment times, with less interest. Basically, if you stay in New Zealand, you’re most likely to repay your loan within seven years. If you go overseas? You’re doubling your sentence. Although the Tinder pool here sucks, it might be worthwhile sticking around long enough to get rid of your loan if it’s not too large. Alternatively, if you go overseas, make it a priority to continue your repayments regularly - and at a rate higher than the interest accrual in order to actually make a dent in it.

Being proactive and smart about your student loan after you leave Uni is one of the best ways you can look out for your future self. “I’m literally paying for a past life decision for the rest of my life - it's fucked. For the 2.5 years I was at Uni, I’m paying for it for the next 20 years,” says Alysia. She wishes the university would have more advice and information surrounding the topic of student loans. “In general there needs to be more education around getting into a massive debt – the general consensus seems to be that student loans aren’t real debt.”

Byravi also believes that it is important to cut the loan short as soon as you can, if that’s an option, wishing that she had stopped studying earlier when she had wanted to leave Uni. “If you think that you are wanting to quit your degree part way through, do it. Student loan in general causes daily stress. The fact I’m still paying it off 14 years after I graduated is a bit of a laugh.”

Hindsight is 20/20 for Alysia. “Now I’m in my mid-thirties and slightly more responsible, you tend to reflect on bad choices: getting a student loan and going to Uni for a degree I didn’t want. I was just too young and had no idea what I wanted to do, and now this loan is haunting me for my bad 18-year old choices.”