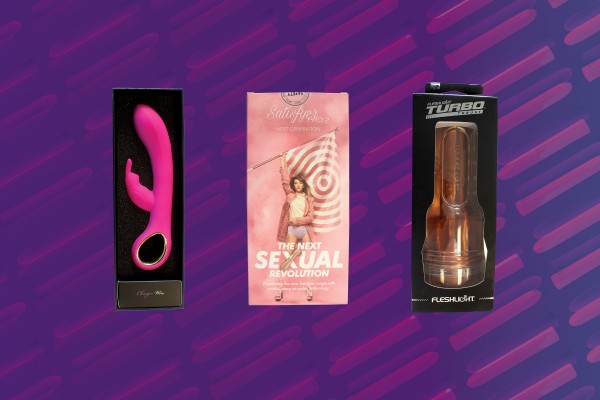 I came in 5 minutes with this thing. Embarrassing for me, but great news for those who struggle to achieve orgasm. The function that passes the vibration between the clit stimulator and the internal shaft was what did it.

Horrifically, I realised too late that my cat had been watching the whole time. Staring aghast at what he had seen, he fled the room and proceeded to meow REALLY FUCKING LOUDLY in the hallway for at least five. I think he was trying to call for help.

Despite sounding like a misspelled cross between a bad action sequel and a new men’s razor, this toy really packs a punch to your clit. Rechargeable and silicone, it’s a modern and discreet-ish looking toy (although a chick that I study with has an inhaler that is very similar looking - so you could possibly pass it off as a medical device).

Before using it, I checked out the reviews on the website. Every review on the site was 5-star, with one reviewer stating she “even uses it on him.” My response to that is, “how?”

I ensured I was actually alone and went for it. I’m not even kidding, I was done in like two minutes - no word of a lie. It’s literally a suction cup on your clit. In some ways, this is disappointing, because mazzing should really be a time in which you Treat. Yo. Self, and the idea that it can make me come in less time than it takes to take the thing out of it’s drawer, seems somewhat counterproductive. I bet it’s great for those who want to learn how to orgasm, though.

I’m a tried and true five-finger veteran (at least 10 years of regular wanks on record), so when Critic’s editor asked me to review a Fleshlight, I was a bit stoked. People buy these things for a reason, so I figured hell, maybe there’s something to ‘em.

And there is. The Fleshlight Turbo is actually pretty dope. It’s basically a rubber tube you stick your dick inside. What’s not to like?

Downsides are that the admin required to maintain the thing is pretty hefty. You’ve gotta heat it up to get it to a desired body temperature (I skipped this part because… well, I just couldn’t bring myself to go sit in the kitchen with a rubber dick sock soaking in warm water), then you have to spray lube down into the thing and all over your dick. Afterwards, you have to go through a rigorous cleaning process using a variety of separately sold Fleshlight products.

But, if you’re the kind of guy who’s trying to fuck a fleshlight, that shouldn’t really matter. Real people are admin, too. Think of all the energy you’ll save on groundwork, dates, and all that other shit. Just buy the Fleshlight Turbo, fuck it when you want, and go back to playing League of Legends or whatever.