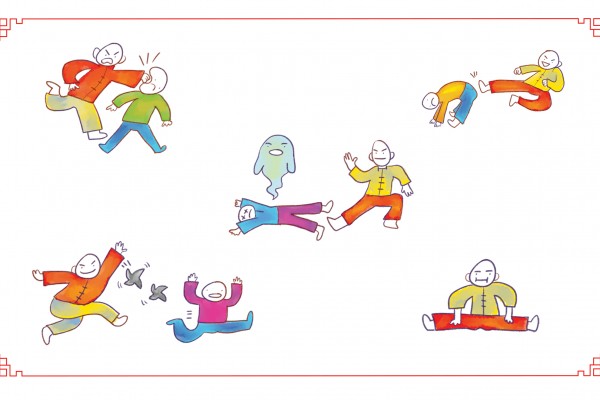 Don’t Fuck With Me! I Learned Kung Fu in a Shipping Container

Shipping containers. “The melting pot of the human condition,” said Nietzsche. The “ultimate proving ground for the spirit of mankind,” said Kierkegaard. Or were both those quotes from my high school weed dealer, Big Steve, who lived in a shipping container himself?

When I think shipping containers, I think of action movies, of gangsters smuggling drugs and money and guns, of the hero sneaking into the dockyard and getting into a brawl, and at some point someone’s head getting smashed into the metal side of a container, making that loud, echoey “thunk” noise.

So, when Chelle, Critic’s Feature Editor, told me that there was a shipping container over on Carroll Street with a cardboard sign taped to it advertising one hour “Wing Chun Kung fu” lessons for $5 I leapt at the opportunity. Yeah, that’s right, $5. I could use that fiver and go to “pint night” (and get my toes stepped on by a thousand sweaty 18-year-olds in a dimly lit basement just to order a pint of Speight’s) or, I could go learn Kung fu. So I went and learned Kung fu.

When my flatmate Delaney and I showed up at the rusty container on Carroll Street, tucked within a small lot alongside a few beat-up car husks, my first thought was “Damn, I’m about to be sold to human traffickers.” But then, out came Chris, the instructor. A smiling red-bearded man with glasses, wearing a plain t-shirt, Chris was tall and beefy, but not overweight, basically a normal-looking guy.

He introduced himself and took us inside, where, as they say, the trafficking magic happens.

I wish I could say that, upon entering the shipping container, I was astounded, because lo and behold, it was actually a clever front for a top-notch training academy. But honestly, it looked exactly like what you would imagine a shipping container Kung fu academy in an abandoned lot to look like. Basically, Napoleon Dynamite’s secret lair. We’re talking posters of Dragon Ball Z and Wu-Tang Clan, pictures of Bruce Lee and Ip Man, random burning candles, a weird wooden fighting dummy contraption, a Kung Fu Panda figurine, and a large colored pencil drawing of what appeared to be someone getting into a street fight with a glass bottle. There was also a bottle of canola oil on the ground. Not sure what that was for.

We were joined by two veteran students, a father and son named Bruce and Jim. The four of us spent the first portion of the evening standing in front of Chris, mimicking him as he progressed through a series of slow (and I mean really…really, fucking slow) arm movements. They were reminiscent of the “wax on, wax off” Mr Miyagi training, and Chris said they were meant as a meditative exercise, focused on centering the mind and relaxing the body. Unfortunately, I couldn’t concentrate very well, and became embroiled in an elaborate daydream involving a bank robbery in Italy, a motorcycle chase, Kate Upton, and a slightly-tanner version of myself with bigger biceps and whiter teeth.

After the meditative movements and my imaginary sex with Kate Upton, we practiced punching, then blocking punches, and then punching and blocking punches, in addition to a few other things, like how to get out of various holds. We did all this from a specific Wing Chun stance, with feet slightly pigeon-toed and arms at rest, elbows bent in front in a triangle formation. Chris had one of the students (often me) attack him, and would demonstrate various movements to control the attacker, usually by using his own weight against him.

I wasn’t exactly sure when this occurred, but at some point during the night the age-old adage “don’t judge a book by its cover” was broadcast in front of me in neon lights. Yeah, there were Dragon Ball Z posters on the walls and this place looked like the den of a 30-something stoner nerd, but Chris could have had My Little Pony posters on the walls and it wouldn’t have fucking mattered. The dude was a certified, Grade-A badass. He briefly mentioned at one point that he’d been training for over twenty years, and it showed. He might not have had the six pack and biceps of The Rock, but he could see 99% of attacks coming and 100% of the time he knew exactly what to do to stop them. I would bet on that dude in a bar fight any day of the week.

At the end of the session, Chris and Jim sparred together in a strange, grapple-like encounter, where they remained in constant contact at the arms and each attempted to immobilize the other. This, Chris explained, was a more advanced form of training that helped a fighter to anticipate movement and preemptively disable attacks. Then Chris brought the session to a close, and asked us for our $5, which I gladly relinquished. Unfortunately, although I was lightly thrown into the side of the container a few times during demonstrations, I didn’t get to see anyone’s head smashed into it and hear that “thunk” noise from action movies. I did, however, feel (sort of) like a badass for an hour.

Humble and unassuming, Chris left me with the words, “I’m not worried about any of that ‘bow to your sensei’ type shit. We’re just a fun Kung fu club, man. Hope you learned something useful”.

Then I walked away and he shut the door of the shipping container and we all went home. I tried to remember what he taught me, but I’m pretty sure I forgot most of it, because later that night while we were walking, Delaney shoved me and I couldn’t even pull my hands out of my pockets to catch myself … so I fell face-first over a fence post and into a thorn bush.

But what can I say? Rome wasn’t built in a day. I’ve got some training to do.

I would say that everyone should go to Carroll Street and learn Wing Chun from Chris inside the shipping container ... but then I wouldn’t be able to whoop y’all’s asses when I see you around Dunners. So stay away.

In the meantime, if you see me on the streets, back the fuck up. You’ve been warned.