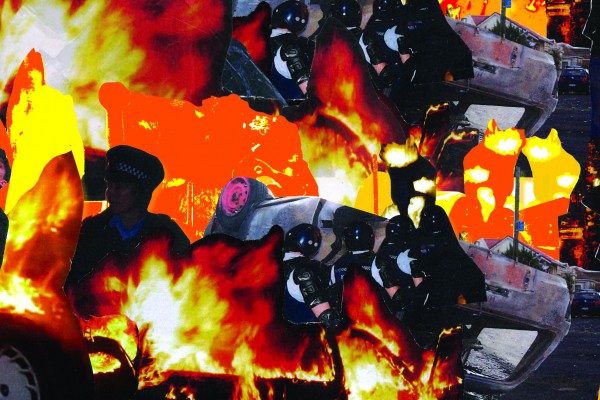 Remembering some of Dunedin’s most lit student riots

Critic talked to students and police who were present at the three most famous student riots over the last thirty years, to share what they remember about how it went down.

“Easter Tourney” saw students from Christchurch heading down to Otago each year to compete in sports and let off some steam, student-style. During the 1990 Easter Tourney weekend, several parties began early on Saturday in Castle Street.

At the Palms Resort flat, students began throwing bottles at the building next door. Lincoln University student Mark Dasent was staying at the Palms, and remembers that “it all got out of control”. Police were called to the Palms around 8 p.m. to clear out the party, meanwhile the Gardies Pub (now the Marsh) had become overcrowded, forcing management to close early after a reveller set off the fire alarm.

The crowd deluged out of Gardies, joining the swarm of bodies on Castle Street near the Palms Resort, prompting rioters to roll a car and light the spilt petrol from it. At the time Criticreported that “a stereo played Queen’s ‘We Will Rock You’. A rousing version of ‘God Defend New Zealand’ followed”.

Bottles were flying freely, and police attempted to disperse the crowd toward the Castle/Dundas intersection. It was now around 10.30 p.m., and police were employing dogs to control the mob. Mark was forced onto the roof of his car, parked outside Palms. “The dogs were jumping up against the car, lashing out at me – one grabbed the bottom of my overalls and ripped my overalls off.”

Over the next couple of hours, the riot reached maximum intensity, with numbers swelling to around a thousand students versus 45 police officers.

“They chased us down Castle Street; it was all quite out of hand. Cars were being turned over and fires were being lit everywhere. Another mate of mine, his car got overturned and burnt,” remembers Mark.

Elsewhere in the fray, young policeman Ian Paulin was experiencing his first of all three riots, “on the road block at the wrong side of the riot”. The main riot was down at the Coronation St flats, down towards Cumberland St. “There was a police line on the far side and I think every cop in Dunedin was called in.”

Violence heightened and police began entering private flats in order to prevent bottles being thrown from flat roofs and gardens.

Dunedin District Police Commander, Superintendent Bert Hill, later commented “a fellow was playing ‘chicken’ with a dog, taunting him, but unfortunately when he did that for a third time he slipped on some glass. By the time he picked himself up he had been bitten”.

Ian remembers there were about 4-5 dogs involved, and “one of our dog handlers got a dart thrown in the side of his neck. To be fair, we had no riot gear, no protection equipment – nothing, no pads. A couple of old helmets from the Springbok tour … but that’s about it.”

Constable Paul Kennedy, who later worked on duty at the 2007 riots, was also at the 1990 riot, albeit in his final year of high school. “I remember one of my mates getting locked up, for pointing a water pistol at the paddy wagon.”

“We feel the causes lie much deeper than alcohol and general irresponsibility and may well be symptomatic of the increased pressures University life places upon many students [...] students from almost every other University had received their first bursary payment - in one lump sum. Otago students had still not received any allowance, an allowance which at best only allows for a very poor standard of living.”

Former rioter Mark was back in Dunedin two weeks ago, dropping his own kids off at uni. “My daughter lives on Castle St. I pointed to the Palms Resort and said to my daughter, ‘this is where we had the riots!’ It was one of those great memories.”

The Undie 500 was an annual car rally organised by ENSOC (Engineering Society of Canterbury), where Canterbury students purchased vehicles for under $500, decorated the shit out of them and drove them down to Dunedin. Like Hyde Street, each car and its occupants dressed in a specific theme, and like Hyde Street, there was much drinking involved.

Police officer Ian Paulin was once again working at this event. “I’d dealt with the Undie 500 right from its inception.” He acknowledged that it had grown over the years from a really fun event with some amazing vehicles, to something else. “It just became more about the party at the end of it than the actual event [...] it reached a point in 2007 where it was just massive”.

And massive it was.

Jeremy Duggan, a physiotherapy student at the time, sat on the front porch of his Frederick Street flat with friends “with Shapeshifter’s ‘Electric Dream’ and Scatman John’s ‘Scatman’ being blared on repeat,” watching the build up of cars and people, before setting off towards the mayhem. “We were able to follow the dotted couches that were burning along the way, like a guiding path right to the heart of Studentville – Castle Street.”

When Duggan and his friends got there, the scene that greeted them was one of bedlam.

Critic at the time reported that students faced off against police, chanting ‘Scarfies on the piss!’ and singing ‘Why Can’t We Be Friends?’ amidst flaming piles of furniture (couches and mattresses) and flying bottles. Cars were being overturned and torched.

A loud student haka was underway when the police managed to push the crowd down Castle St toward St David lecture theatre. The crowd pushed right back, charging the police line all the way back to the Gardies pub.

Critic reported that a student saw a group of officers converge on one person. “There were seven police in riot gear [...] they beat him unconscious.”

Jeremy and his friends didn’t stay long. “It was carnage and was raining empty bottles, bricks and letterboxes from above. There were sure to be injuries, so we got the hell out of there.”

Finally, the police managed to force the students all the way back through the university campus and through onto Hyde Street (because surely that would result in no shenanigans whatsoever). Sure enough, a large party was waiting for them at Hyde Street, with fires threatening to engulf dry timber houses and power lines.

Constable Paul Kennedy worked the scene that night, and recalled that a fire engine arrived to put out a fire, but had bottles thrown at it. “We had to clear the street so that they could put out their fires and stop all of this continuing on”.

Most of Kennedy’s colleagues woke up with sore heads the next day, from receiving bottles to the head. “The riot gear was [last] used in the 1981 Springbok tour. So it was very old and the helmets weren’t very padded.” Ian Paulin recalled that “there were some pretty good injuries from that; our front line was getting bottled, flying debris and stuff”.

At the height of the riot, numbers were in the thousands. “We were really overwhelmed numbers-wise. You can’t do anything when you’re faced with 3000-4000 students and you’ve got a line of 15 cops,” said Ian.

Over the weekend, 69 people were arrested, 21 of whom were charged with rioting. Those ultimately convicted were forced to pay fines, reparations, donations and court costs exceeding $16,500 (up to $2,000 for some individuals), as well as community service.

Though the Friday night saw some fires, the Saturday night was the biggest debacle, with the midnight closure of the Gardies pub leaving many people in the streets once again. Chanting "ole, ole, ole," the students heaped rubbish atop growing fires at each end of the street, with firefighters watching from afar, allowing the fires to burn out rather than risking their own safety in the revelry.

First year health sciences student Adam* was at his sister’s flat in Castle Street, watching as the night escalated. “[The police] decided to start clearing the street, and there was a haka [in response]”.

Over 500 people (most of whom had been on the piss since lunchtime) launched bottles, bicycle parts and other white elephant items at police officers.

“People were throwing bottles from the back, they weren’t throwing them far enough, so they were landing and hitting other students,” Adam recalls.

Around 12.30 a.m., Adam saw about 40 police officers don full riot gear and form lines eight officers across outside the Gardies on Castle Street.“And then they just did this full-on charge at everyone [...] what they wanted to do was try push everyone off the streets and into flats.”

Adam’s sister’s flat was one of the first that the police ran past. A resident of the flat got bowled over by the approaching wave of police, and Adam stepped in to defend her. “She was just screaming on the ground so I ended up kicking the riot policeman and he swung his shield at me and knocked me out in the doorway”.

The police later issued Adam with a “pretty shitty apology” for this after footage of him being knocked out later surfaced. He isn’t too mad about it now, though. “I guess when everyone gets to Dunedin and you’re away from home for the first time, you feel a little bit invincible.”

In another flat on Castle, 17-year-old Luke started his night with anticipation. “I hadn’t started uni yet and it was all very exciting.” He eagerly faced off against the line of police, joining in the haka, until the police started advancing with riot shields. He quickly became frightened when he found himself caught between the advancing police and the unmoving sea of students. “We got totally swept up in it. And all of a sudden, I just wasn’t comfortable with it anymore.”

Struggling to get out of the throng to safety was difficult. “I don’t know what would have happened to me; I was frightened. I felt like a little boy in that moment.” One of the flying bottles hit Luke in the back of the head, but he didn’t realise the severity of his wound until the next morning when he awoke to blood in his bed. “I ended up going to A&E and getting six stitches in the back of my head.”

There were multiple complaints from students who were pepper sprayed by police in their own doorways. According to Critic, police were going through “so much pepper spray that by the time they had pushed the mob back down Castle Street backup canisters were brought in.”

According to St John, ambulance services attended 15 patients, including one with serious burns (a student who fell onto a burning couch while trying to jump over it, later requiring surgery), with others suffering lacerations and pepper spray effects.

Officer Ian Paulin was again present on this weekend. After the hectic 2007 debacle, the police had levelled up and called in reinforcements from Invercargill, Christchurch and Dunedin. “There were numerous arrests. I can’t remember the numbers, but we were filling vans up and taking them back to the station. It was pretty full-on.”

A bona fide student riot veteran by this point, what Sergeant Ian Paulin remembers most is the sound. “The noise of a riot is something else. That’s what sticks with you. It’s a loud, moving feast of bodies, really.”