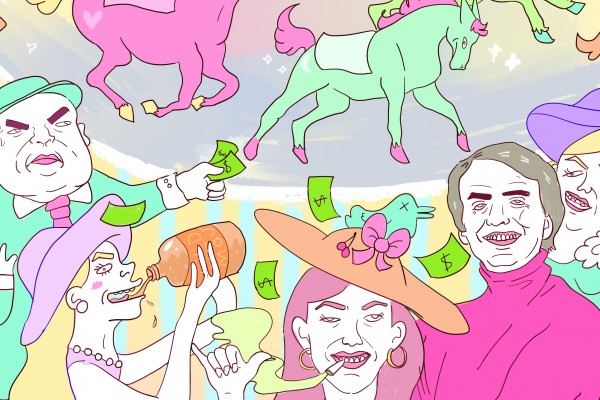 Nags to Riches: How I Tried (and Failed) to Game the Omakau Horse Races

One sunny Dunedin day, I was enjoying my freedom with some leisurely drunk reading of Carl Sagan’s “Billions & Billions”, when I came across a story about the invention of the chessboard:

Once upon a time, the Counsellor to a King gave the King a new game: chess. In a fit of delight, the King asked the Counsellor what he would like as a reward for this gift. The Counsellor replied, “I am a modest man, who wishes only for a modest reward”. Waving his hand at the chess board, he said, “I would like a single grain of wheat on the first square. Then double that on the second square, and so on for all 64 squares”. The bewildered King granted this reward, thinking it meagre as fuck. What the King didn’t know, however, is how insane shit gets when you double it regularly, and due to exponential law, the total expense of the Counsellor’s reward ended up bankrupting the King.

I started to form a foolproof plan.

At the races, horses often pay $2 or more for a place (first, second or third). What if I adopted an exponential mentality for betting on horses? Most “gamblers” smack down big bucks, losing a lot of money in between the wins. That’s why it’s called a gambling problem – if it were a successful lark, it wouldn’t be a problem.

Like the Counsellor in Sagan’s story, I too am a modest man.

I set out some rules because we all know that, in the heat of the moment, emotions run wild. And this was not gambling – it was merely an experimental exercise in using mathematics to one’s advantage. The rules were as follows:

- Each bet must be placed as a fixed odd bet, so that there are no changes in the odds.

- Each bet must be placed on a horse that is paying as close to $2.00 per place as possible, and the horse cannot be paying any lower than $1.80 per place.

- In the event of a win, all profits above the intended return dividend must be skimmed off into a “side kitty”, to be drawn from in the event of needing to bet on a horse paying less than $2.00.

- As much as I would like to “quit while I am ahead” at any point, I am hereby committed to following this through until the end.

The Omakau Harness day on January 2nd was to be the unsuspecting V-Day of my scheme.

We arrived at the racecourse nice and early, in order to secure a shady spot among the trees from which we could operate our shady dealings (i.e., drink to excess and smoke the odd blunt).

As race two approached, I swaggered over with the dusty old men to place my bet.

“$1 a place on Dora the Explorer, please,” I trilled at the elderly TAB lady. It was paying $1.95, so with Swedish rounding my $2 dividend was on track. She complied, the race ran, and just like that – the horse came third. I now had $2 to bet on the next race.

Race three loomed. “$2 a place on Folklore!” I giggled at the lady, because by this time I was a little stoned. Folklore was also paying $1.95, and it whistled home for a third place. Holy shit. My dastardly plan was working. I used the time between race three and four to eat a hot dog and skull some warm Old Mout Scrumpy. I was on fire.

In race four, things started feeling shaky. Miss Fandango was my pick, and she was trailing for the first half of the race. Surely it couldn’t all be over now. I gripped the fence railing, willing the glacial mare to find some urgency. Thankfully, another horse fucked up and Miss Fandango took advantage, sneaking in for third – paying $2.20). My heart was racing, and I wasn’t sure if I liked the winner’s anxiety slowly seeping over me. However, I felt calmer now that I had some coin in my side kitty. 80c, to be exact! With $4 to spend on the next race.

Race five saw Ohoka Matty come second easily, paying $2.10 – adding another casual 80c to the side kitty. Shit was getting real. I had $1.60 cold hard cash, and $16 to slap down on the next race. But there were no horses paying close to the $2 mark, which presented a challenge.

Drunk/high me decided to hover around some elderly men standing near the stables to see if I could get any sly tips. The name “Verge of Greatness” got bandied about a lot, and I decided to take the plunge, even though it was paying a whopping $3.70. The overall form of this horse didn’t have me reaching for the wallet with confidence, but I’ve learned to never ignore old horsey men at the races.

Old mates stumped up the goods. That sweet horse got its hoof in the till, boosting my side kitty up to $28.80. I immediately began to mentally spend my winnings on shit from Typo.

I was halfway through the experiment and I was all around the honey pot. Dopamine and weed flooded my body, and I considered dropping out of uni to make it big as a gambler.

Race seven provided a horse paying exactly $2, called One Over Da Skye, which outgunned the others easily. Nothing could quell my excitement.

For race eight I chose Fear Cruising, at $2.70. It was a gamble, but at such juicy odds it was worth a nibble. Nervously scoffing an ice cream in the sun, I stood near the finish post, peering out at the whinnying pack on the opposite side of the field. As the race began, Fear Cruising humbly set off mid-pack, and I wondered snidely if she was even hungry for a win. I spent the next few minutes cursing the lazy steed, and immediately felt guilty when she began to gain some ground on the others.

You wouldn’t read about it! That handy mare yeeted on home for second place, adding a whopping $44.80 to the side kitty.

Fuck! This was fast becoming far more money than I make at Critic. With three races to go, I chugged some more Old Mout and huffed back a Winnie Blue, which is customary at events such as these.

On race nine, I backed a horse paying under $2. At $1.90, I knew that I would have to steal $12.80 from the side kitty to cover the excess, but it was more important to keep the experiment going, so I did what I had to do. Race ten was tense times. Feeling like Paris Hilton ca. 2001, I put $256 to place on The Dominator. Nerves overcame me as he started out sluggish, and again I questioned the heart of this horse. My fears were once again allayed as The Dominator nabbed a third.

Was this what having a stroke feels like? A cool $102.40 was added to the side kitty, which now stood at $163.20. At the very least, I would have that money to take home, which was a comforting thought.

Finally, here I was on race 11, spending $512 on a place bet. All I could think about was how fucking poor I am over the holidays, and yet here I was, gambling half a thou on a dusty old mare (I have no idea what the TAB lady thought of my steadily growing bets). The Tin Soldier was the horse I backed, paying $3.20. I was going big or I was going home.

As the race started, Tin Soldier was chiming in with real purpose, running an honest race. I could hardly watch as they turned and charged down the home stretch.

My fucking horse got fourth.