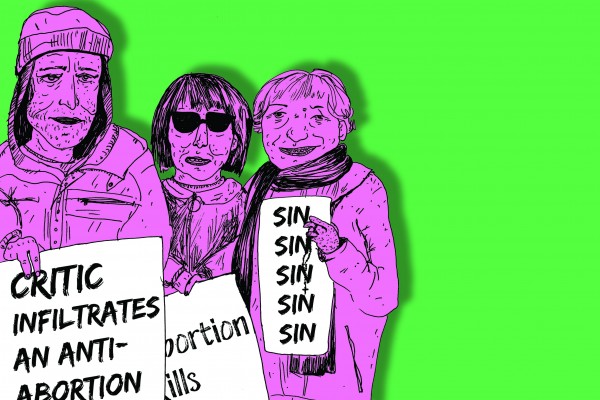 Meet the People Who Protest Abortion Outside the Dunedin Hospital

The majority of abortions in New Zealand are deemed acceptable on the grounds of “serious danger to mental health”. I should know; I’ve had one myself. Conceiving on my 18th birthday during O-Week, what are the odds? Pretty high, if you’re me. Regardless, there would have been no damage to my mental health by having a baby – I would have just been bored as shit and miserable for the next 18 years. So for me, the decision to get an abortion was incredibly easy.

The right to legal abortion in New Zealand is currently decreed by the NZ Crimes Act 1961, which states that the grounds for abortion within 20 weeks of conception are:

If you walk to university via Dunedin Hospital, you may have encountered the group of pro-life protesters parked outside the entrance late in the morning every Friday. Ever-present with large laminated signs that look to have been in use since the ‘80s, it’s easy to see that this protest has been in motion for quite a long time. Critic reporter Jess Thompson and I rocked up to find out a bit more about their never-ending quest to save every fetus (gotta catch ‘em all). Huddled together are four warriors for the cause – gentlemen Des and Tony, and ladies Pauline and Therese.

I didn’t tell them about my sordid past though. I wanted them to think I was cool.

As we begin to chat, a bellow of “FUCKING BASTARDS I’M GETTING AN ABORTION DONE SO SHUT UP!” erupted from a passing car. It seemed like a good start to the interview.

Chelle: Obviously you get shouted at; how often does that happen?

Chelle: Do you find it disheartening?

Pauline: If people would make a comment, we’d rather that than apathy. Because then they’re thinking, taking notice, seeing what we’re doing here.

Jess: It’s the same at Critic.

Des pipes up: You’ve got all the bacon lettuce and tomato people.

Chelle: … the what, now? Bacon, lettuce, and tomato?

Chelle: What about it?

Chelle: I could go a BLT.

Des: You know, all the odd variations of …

[If you didn’t click, yes, that was a joke targeted at LGBT people]

Chelle: Have you ever managed to successfully prevent any abortions on the day of?

Pauline: We may have because a grandmother once stopped, holding her grandchild and said, “this was prevented because my daughter walked past and saw you, and decided not to go ahead with an abortion”.

We’ve had a few medical students from the Lindo Ferguson who have said “we’re going to be Christian doctors and we’re going to do our best to help”.

We’ve had boyfriends stop who are very sorrowful and angry that there’s nothing they can do, even though it’s their baby.

Jess: Do you get any medical students coming by to talk you out of this?

Pauline: We did have one, who said, “I’m going to be a doctor and do as many abortions as I can because of you”.

Chelle: Are there any instances where abortion is acceptable? Rape or incest?

Chelle: What about certain diseases or conditions that the child might have, or a high risk of injury or death to the mother?

Therese: There’s no guarantee with scans that those could even be true. Mistakes happen all the time. And the other side about the rape and incest is, there’s so many young couples that can’t have children that’d love to be able to adopt a baby. Even if you don’t want it, you know? But you can’t adopt babies, it’s very difficult. There are none. They’ve all been aborted!

Chelle: What are your thoughts on contraception? Or the morning-after pill?

Pauline: Some pills just prevent ovulation, so that would be ok. The morning after pill is an abortion.

Chelle: Shouldn’t we teach more about safe sex in schools rather than just abstinence, so that less people are forced to choose to abort?

Des: Shotgun marriage if they get pregnant.

Jess: Is that what you’d recommend?

Therese: I don’t think all that education is necessary. I think they’re actually telling teenagers to go and try [sex]. That’s my honest opinion.

Chelle: If God created all life that is so precious, do you condone killing animals for human use, or is it only human life that is important?

Pauline: I believe in farming animals for eating.

Pauline: We’re above animals. Were talking about a human life.

Chelle: The Jewish Talmud teaches that the fetus is not a person and has no rights. The Old and New Testaments don’t specifically prohibit abortion. What is your religion’s specific stance on abortion and where did this stance originate, if not from the Bible?

Tony: From the instant the Israelites knew they were surrounded and going to be murdered in the morning, they spent the night in love with husbands and wives so that the instant of conception that was a person, that split-second.

Chelle: The Catholic Church’s stance from 1312 was that abortion in the first trimester was fine, until 1869 when it was thought that sperm cells contained a fully formed tiny fetus, so the law was changed due to this misinformation - and then abortion became grounds for excommunication. So the current Catholic laws are based 150 year-old pseudoscience – how does this sit with you?

Pauline: That whole thing is not true. None of it.

Therese: You’re not excommunicated. He’s a very forgiving God, isn’t he? [hands me a bookmark with religious stuff on it]

Chelle: In the early 1900s the US banned all abortion as birth rates were supremely low. Women were also excluded from medical school and therefore there were no women representing women’s health or their right to terminate pregnancies. This was the law until Roe vs. Wade in 1960, allowing abortion in the first and second trimesters. Is it possible that laws have been made to ban abortion in history for political reasons, rather than because abortion is inherently wrong?

Pauline: It was always banned! The first time it was made legal was Roe vs. Wade. That’s wrong.

Des pipes up again: In the early 20th century, eugenics was very popular. Even here! These people not deserving of life. Imbeciles! The IQ test! That was to find out who the idiots were, not who the brainy ones were!

Pauline: No, Des. They didn’t kill them.

Chelle: Apart from protesting here, what other pro-life efforts do you participate in?

Des: We pray every day.

We pray a lot.

Jess: What’s the process when they have an abortion?

Pauline: If you’re having one that’s over this [pointing to the 12 week old on the chart], 12 weeks is the legal age. They open up the womb, push things in to break it up and pull the baby out. When they get the baby out they have to put it all on a little petri dish and make sure they’ve counted all the arms and legs so they don’t leave anything inside.

Des: I got this chart off the wall in the office of the Holy Name Church and I thought, ‘I could use that!’ So I purloined it.

Pauline: In America they have abortions right up to birth.

Des: In Belgium and Holland, they kill them after they’re born!

Pauline: No Des. I have never heard that.

Thanking them for their time, we left a bit bewildered, but patting ourselves on the back for being real mature journalists, like Louis Theroux when he interviewed the Westboro Baptist Church.

Where To Get More Info

If you are looking to be referred to an abortion provider you can visit your GP or Family Planning.