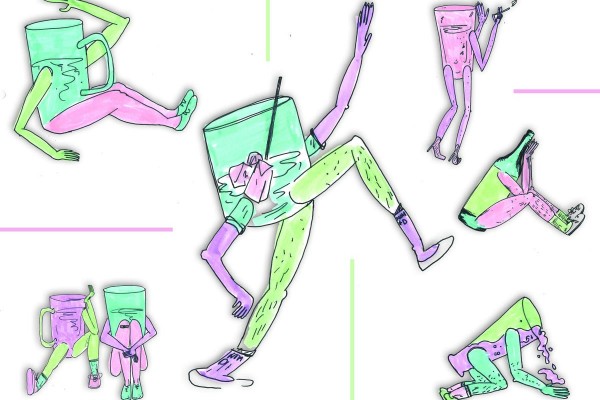 Three of our intrepid reporters went on a walk from Central Library to the Octagon. They came back five hours later, about $80 poorer, and much drunker.

This place is delightful and wholesome, like my kindergarten or my grandparents’ sex life. The main bar was closed for some corporate function, but we were seated in the restaurant, which had a lovely French cottage vibe. The waitress gave us a good wee spiel about each of the beers on tap, and she even went off to the other bar so we could get the specialty options.

(New New) New Ombre: Belgian Lime Ale, $11.50/Pint – Ombrellos grow their own hops out the back, and they got just enough to make one keg of this. Unfortunately it’s not amazing, but still pleasant enough to kick off the night. Quite sour but also fruity, like Andy Dick.

“Wait, that’s not a pub!” I hear you say. Well fuck you, because Velvet Burger sells Double Brown, so it’s good enough for me. Actually, it’s more than good, it’s amazing. At $4.50 for a 440ml it’s probably the cheapest on-license pint in the city, and the wait staff gave them to us unopened, so we could shotgun them in the back booth.

We got caught stabbing keys into the cans by one of the staff, who said “Hey, don’t do that here”. But then when we offered to go outside she just said “Well, do it now, but be quick”.

Absolute champion, give that girl a raise.

Who could possibly complain about this true gem of a drop, gifted to us by the gods and blessed by the breathas? Notes of caramel and manuka balance out a bitter, almost sour finish.

Well this place is fucking wild. It’s a long narrow gin bar filled with 50-something men in leather jackets. There was a guy on the stage doing soundcheck with an electric ukulele, which sounded awesome. Unfortunately he spent like 30 minutes doing the soundcheck and never got around to actually starting.

We asked if the bartender if they had a drinks menu, and he said they has 186 different gins. That was scary and we obviously looked overwhelmed, so he told us he would give us the house special.

Bushnall’s Gin and Tonic, $8 – G’n’T is a drink sent from hell. My mother adores it but I just don’t understand it. Like Shortland Street, or thinking Sam Neill is a sex symbol. This wasn’t too bad, because they went hard on the lemon, but still gross.

In a 1952 issue of Critic, we found an ad for Bransons which promoted it as ‘The Closest Hotel to the Medical School’. They’re clearly not going for the med student market anymore. This place is good classy bogan joint. They don’t mess around with anything crafty or anything that would attract female clientele.

There were two other people. One was an old man looking solemnly at the pokies, apparently trying to work out if he had enough left for another spin. The other was a young guy punishing a crate bottle of Export, watching a rugby league game by himself.

On the plus side, we did see that music video where Kelly Rowland tries to text Nelly via Excel.

Speight’s Jug, $12 – We missed the $10 happy hour but it was still a decent price. There’s something just right about Speight’s. It’s good for you, it puts your mind at ease. Fuck I could go for a Speight’s.

The complete antithesis to Bransons’ depressing ‘divorced Dad who just lost custody’ vibe, this place was packed out and partying. Everyone in town had apparently showed up for some overpriced tortillas and beans, and it was actually kinda hard to order a drink. One piece of advice for Alley Cantina – they will try to sell you Estrella. Don’t buy it. It’s awful.

Margarita Jug, $26 – The jug looked undersized and overpriced, but it turned out to be great value. It was just big enough to exactly fill 3 glasses, which would have cost $11 each on their own. So that’s a win. Opinion was mixed on whether it was delicious or way oversour, but I guess that depends how into lemons you are.

Despite its ridiculously generic name, this place is hella nice. Literally every beer on tap is delicious, and they rotate them all the time so there’s always something new. It weirdly feels like two bars though – the whole part that is visible from the street is sleek and modern and high-end, but at the back there’s a thing called ‘Sports Garage,’ which is literally separated by a garage roof and is just a giant projector screen and a big bunch of terraced seating. Also, they sell crate bottles there. It’s a whole different bar, it’s wild, but would be an amazing vibe for an All Blacks game.

Good George IPA (5.8%) and Good George East Coast IPA (6.4%), both $10/Pint. That’s a great price and both are genuinely gorgeous beers that you absolutely must go out and try right now. The regular IPA was a clear orangey-brown, with a massive peach flavour that made you forget how fucked up it was getting you. The East Coast IPA was a hazy yellow, super hoppy and maybe even better than the regular. It was also 6.4% so we were really feeling it by the time we left.

This place is cute. It’s like if Zooey Deschanel was a bar – full of quirky wee things like books and a fire and I think I saw a bicycle standing up against a wall. Also, there was a copy of Critic from February 2017. There were a lot of young professionals doing classy young professional things and talking about having money and jobs.

They had a sign outside advertising a tasting tray of five Emerson’s beers for $12, which was a hard option to pass up. When they cracked out the tray it looked pathetically small, kinda just like bigger shot glasses. But there was some weird TARDIS shit going on, because they were bigger than they looked. The Pilsner is good, the Bookbinder is boring, and the London Porter is amazing.

This is apparently a legal themed bar because it’s right next to the court house. There are pictures of old judges and shit on the walls, including ma boi Cooke J (absolute bantersaurus rex). It’s a weird theme, because it’s clearly not the place where any prestigious individuals from the legal industry hang out – though it is probably the number one spot to celebrate getting off your drink driving conviction. It’s got a real small town pub vibe, where the good old blokes come to drown their sorrows, chuck some money on the pokies and yell at a horse, and where the only women are the bartenders.

After a bunch of weird crafty shit, we opted to settle our stomachs with a nice jug of Export Gold. I think it cost $13. The beer went down delightfully easy, but to be fair, it was basically water.

I chucked some money on the dogs and after 30 minutes, turned $20 into $22.50. Unfortunately, by the time I cashed out and went back to our seats, one of my fellow pub crawlers had passed out on the couch. We told the staff a very unconvincing lie about how he had done an all nighter finishing an assignment and carried him home.

What other place lets you do Shotguns and charges $4.50 a pint? Unreal.

For real, this place always looks kinda empty but it’s fairly cheap and the beers are delicious. Top notch shit.