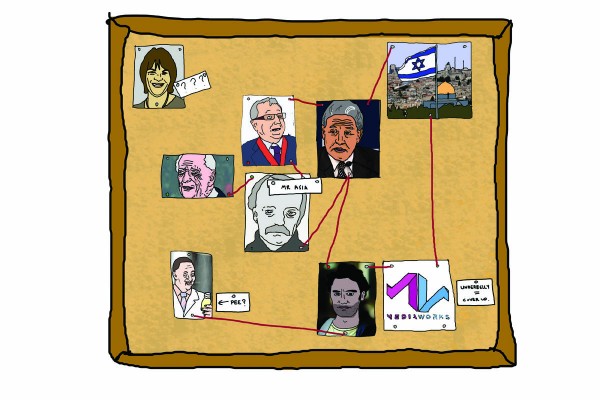 The Story Of How I Became A Shape Shifting Lizard

Trigger Warning: This article deals with anti-Semitic and transphobic conspiracy theorists. They are directly quoted, in their own words, using a number of offensive words and phrases.

January 19 2018 was a day that changed what normal meant in New Zealand’s political history. Prime Minister Jacinda Ardern announced her pregnancy, and changed perceptions across the world about what it means to be a working mother.

In the underbelly of the internet, gears started grinding. A team of secret writers sprung into action, published an article, and sent an urgent press release to news outlets across the country. It was then promptly ignored by everyone who received it, because, well, it was fucking insane.

“Is Jacinda Ardern a Transvestite Man – Faking Her Pregnancy?”

The answer, of course, is no. There is no evidence whatsoever to suggest that. The article’s claim was based on the fact that Jacinda looks different now to how she did in high school – darker hair, more pronounced teeth, and a less rounded face. You know, like aging.

None of those observations are followed up in anywhere near enough detail to justify the author’s bold claim, but that doesn’t stop them from asking the big questions.

“Who is this person posing as our leader? What happened to the young girl? And perhaps most importantly, where are Jacinda and Clark going to get their baby from? The Ministry of Vulnerable Children?”

The article came from mediawhores.co.nz, a conspiracy website which has posted over 1000 separate articles since it launched in August 2016.

The website, which claims to be “the leading news source in NZ,” is an eclectic mix of paranoia, anti-Semitism and transphobia. There’s wild accusations thrown at almost every public figure in New Zealand, and a bunch of overseas ones too.

Their specific brand of conspiracy theory can mostly be distilled down to four major points:

1. That many celebrities and politicians are secretly transgender.

2. That many of them are also demonic reptilian shape shifters.

3. That powerful people (mostly Freemasons) are running secret pedophilia rings, protected by the police and the government.

4. Israel and/or Jewish people are controlling the media and other major world institutions.

Sometimes the headlines seem so absurd that it must, surely, be parody. But it isn’t. The articles make little to no sense, but not in a satirical way. And they’ve just been way too committed for way too long. No one making a joke would put in that amount of time.

Is Mike Hosking a Transgender Woman?

Did Richie McCaw Conspire to Help Cover Up the Murder of Jerry Collins?

When I first called Cohen, he denied any involvement. “I’m not involved in it. I run a website company with hundreds of domain names… I wouldn’t touch it with a barge pole, it looks dangerous. I keep a close eye on it because I know it’s quite shocking,” he said.

But almost immediately, he gave up on his denials and got distracted by threatening me.

“They’ve been posting about shape shifting snakes. I’d be very concerned if I was you. I imagine you’re probably one of them. I know the articles you write. They probably need to have a better look at your teeth. You can always notice shapeshifters by their teeth.”

Any claim that Cohen was simply a website administrator quickly dissipated, as he started spouting theories perfectly in line with the website, about government pedophilia rings, how the bible proved there was a species of reptiles that live among us, and Pizzagate, the debunked conspiracy theory that Hillary Clinton was behind a human-trafficking ring in the basement of a Washington pizza restaurant.

When I asked him for a second time if he was involved with MediaWhores, I got a different response. “I think you have an obligation to expose, to protect people from psychotic pedophiles. I said to [the people behind the website] that I would guarantee that if you register a domain, I’ll back you up.”

Before he hung up, he turned it back on me again. “There is organised Masonic child abuse in this country. You were probably raped as a child. You’re a hop, skip and a jump away from 1000 years in the pits of hell. Be careful, or you might end up as our next front cover story.”

The next day, the story was up. They spelt my name wrong and accused me of being part of “the satanist vampire shape shifters conspiracy,” because I had “Shapeshifting eye pupils – not circular!” and “Demonic shape shifting teeth!”

I was part of “the new breed of ‘liberal’ journalists who all seem to conspire to help ignore and/or cover up all of the never ending child abuse scandals in our Nation”.

As by far the least high-profile person MediaWhores has ever accused of shape-shifting demonic activities, I considered it an honour to be part of the same inner circle as Mike McRoberts, Leonardo DiCaprio, Mark Zuckerberg, and the entire cast of Game of Thrones.

Cohen had insisted that if I wanted more thorough answers, I needed to get in touch with MediaWhores through an official email address, which I did. That led me to a very long, very strange call from a man named Alex, who called himself a “MediaWhores Spokesperson”. While Alex wouldn’t reveal his last name, Cohen confirmed it as Bowden.

Alex describes the site as “truth seeking” and “anti-media,” but he rejects the term “journalism”. He says there are around a dozen people that regularly contribute to the website.

Alex speaks with a certain authority, like everything he says is an indisputable fact. He doesn’t sound like some kind of raving lunatic, he speaks slowly and rationally. For the forty minutes we spoke, he was never trying to convince me or change my mind. It was like he was a lecturer, simply informing me of the “truth”.  He did however, warn me not to misquote him. “We have a very large audience, and you, your whole life in front of you.”

Alex speaks with the strength of his own convictions. Which is exactly what makes it so bizarre when he gets going.

Like when he got on to his theories about Winston Peters:

“Winston Peters is a Jewish streetkid. He was kidnapped as a child sex abuse whore. He’s a halfbred Jewish, just like John Key or Taika Waititi. They come out of nowhere, and they become very powerful and they’re always half Jewish, usually on their mother’s side.”

“Winston Peters is a drug trafficker. He’s the biggest heroin trafficker in New Zealand. The second is Prince Philip. He ran the Mr Asia syndicate with Peter Williams QC.

And Media Works is owned by a Jew. They only ran that TV Series [Underbelly] as a coverup.”

Or his thoughts on women’s magazines:

“They’re pushing this trans thing. Trump is behind it even though he claims to be right wing. It all goes back to Israel. Almost everyone who has every been on the cover of a women’s magazine is secretly transgender. Brad Pitt, Jennifer Aniston, Angelina Jolie – that’s an obvious one, Melania Trump is a man. Justin Trudeau is a male to female trans man. Prince Harry was born a girl.

I think there’s a lot of them. Like the [Otago University] Vice Chancellor, what’s their name? Harlene Hayne. Is that a woman? I’m not sure.”

Or the story he says was their most popular ever:

“Hillary Clinton had advanced warning of the Christchurch earthquake, her emails prove it. When we published that, it was read 150 million times around the world. That makes it the most read of anything from New Zealand ever.”

The article currently has three comments and the online viewcounter shows 36,000 reads. MediaWhores insists that Google is “hacking” their website to show lower readership statistics.

At times, MediaWhores seems like a checklist of all the tinfoil hat movie tropes you’ve ever seen: Israel was behind 9/11, the earth is flat, the Sandy Hook massacre was fake, and the Freemasons have secret control of the government.

But according to Alex, they’re not just a whole bunch of unrelated secrets and coverups, there is a logic to it all. He says it all comes back to astrology and the constellations. His theory is that the “powerful cabals” of Jewish people that control the world know that the sun cycles in a 2160 year period, and that when we reach that point “people will wake up”.

“We are in the time when Jesus Christ should return and awaken man. If that happens, the overlords are fucked. And they know that, which is why they’re fighting so hard to control us.”

For the most part, the MediaWhores conspiracies are absurd enough to be harmless, simply because they fail the test of reasonableness.

It’s what University of Otago Philosophy Professor Charles Pidgen calls “Cognitive Suicide” – the idea that they are so crazy that in order to believe them, you have to disbelieve so much about what we know about the world that they’re no longer plausible.

“How could you get so many people to be singing from the same hymnsheet? What would be their motive, what could be the point?”

Alex is deeply paranoid that there is a government conspiracy to keep a close eye on him. “I know they’re watching me though, every time I go to stay somewhere, by the end of the week there will be three new streetlights.”

But he also privately thinks there are people within the government conspiring to disrupt surveillance and keep his website online.

“I’m surprised MediaWhores is still up. There’s a degree of protection.There must be a small army of intelligence officers going against the government to protect us.”

He says he’s going to keep posting and trying to expose the government conspiracies until the mainstream media and the rest of the population catches on.

“We haven’t been murdered yet, it’s quite surprising. But if we do get murdered we’ve proved ourselves right.”