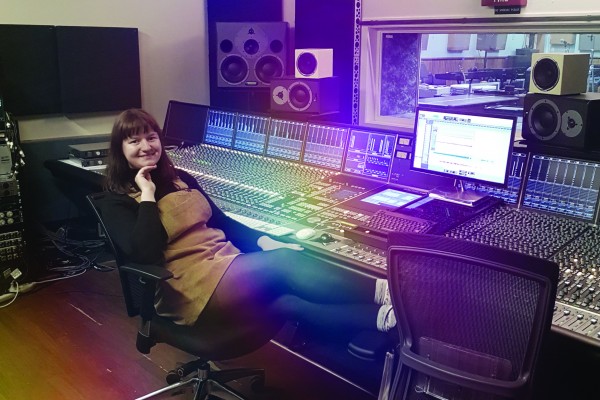 I See Music: What It’s Like Living with Synesthesia

The view from the living room window of my childhood home looks across Kaikorai Valley, a perfect skyline of hills rising to meet Flagstaff. As a four-year-old, I would trace my finger along the line of trees on top of those hills. Every now and then, the sound of a horn from the nearby train-tracks would cause the line of trees to set alight, giving the illusion of a train on fire. It wasn’t until years later that I realised that this happened because the train horns were blasting the note G, which I associate with the colour orange. The hum of my fridge sings to me in warm yellow hues, cars whizzing past are a blur of dark green, and birdsong is a kaleidoscope of rainbows, dancing through the trees.

Synesthesia is a neurological condition in which one of the senses is simultaneously perceived with another sense. The word synesthesia literally means "joined perception,” coming from the Greek words syn (together) and aisthesis (perception). For some, it links up objects such as shapes, numbers and names with sensory perceptions like smell, sight and taste. It's been found that people that have it from birth have an increased number of connections among their brain's sensory regions. So if you wanna look at my brain, neuroscientists, hit me up because I’d love to know if this is true, and it would also throw my ego through the roof.

In my case I have chromesthesia, which is the association of sound and colour/sight. Everyday sounds such as water flowing from a tap, cracking open a cold one, or the swing of a door, activate colours. When these colours appear, they aren’t seen in my mind’s eye; they appear in front of me like an aura. The colours will swirl, but never mix. Like flat fuzzy circles, colours will rise, float around and fade. Sudden noises, such as a dog barking or a car backfiring cause fireworks in my vision, which is why I get easily startled (fireworks are particularly scary). I have very sensitive hearing because of this, and whenever I got scared as a child, my instinct would be to cover my ears, not my eyes. Life at times can be fairly overwhelming as I’m more prone to sensory overload, which has caused a fair few panic attacks. As I’ve grown older, I’ve learnt more and more how to adapt to this noisy planet of ours.

For more than a decade, I thought everyone saw colours with sounds. I had just accepted that what I had was as normal as breathing, because it’s entirely involuntary. I don’t actively think about the colours, they just appear. There is no such thing as silence, the colours are always there, pulsing away, picking up the hum of a light, or my own heartbeat. For me, synesthesia/chromesthesiaismy ‘normal’.

What really makes my life far from normal is music. When specific musical notes or keys are played, specific colours will appear. When I hear a C, I see warm yellow. E minor is predominantly plum purple. B shines as silver as the moon. This is probably why I have perfect pitch, because I have a cheat sheet in front of me when it comes to identifying notes, each of which has been the same colour ever since I can remember. What I find curious is that others with chromesthesia rarely agree with each other on what colour a given sound is. Composers Franz Liszt and Nikolai Rimsky-Korsakov often disagreed on the colours of music keys. I was stoked to find out that Lorde has chromesthesia too, but laughed when I realised that to Lorde, “Green Light” is a very green song. To me, that song is blood red!

Every person’s voice also triggers colours to me. Most male voices tend to be either blood red or baby blue, while most female, or higher voices are either apricot orange or a lemony green. The “what colour is my voice?” game often gets hauled out at parties, with that one drunk person trying to unpick why their voice is so lemony and what that has to do with their personality. The answer is, I have no idea. When my flatmate had a cold, her voice went from apricot to sounding a bit red, and some of my other friends’ voices have changed colour over the years.

I was a weird kid, and would sometimes listen in on my neighbours’ parties as they sat on their cars drinking beers. Occasionally a certain guitar riff from a song would play, which set off colours in such a uniquely beautiful way, as though I was staring at the world through an opal. I would also see these colours when I would dip my head just beneath the water in the bath, and the pipes would sing out to me. It felt like magic coursing through my veins. For most of my childhood that guitar riff haunted me with its beauty. Turns out the riff belongs to the song “Sweet Child O’ Mine” by Guns N’ Roses. So, not only did it reveal to me that my soul is somewhat bogan, it also ignited my love affair with the note and key of C. Once I figured it out, my goal was to make my world as “opalescent” as possible, which has resulted in a very intense playlist on Spotify. If I’m ever feeling down and need an invigorating soul pick-me-up, I just throw on a couple of C-centric songs to feel transcendent.

It therefore makes perfect sense that I, a synesthete who gets happy on seeing colour involuntarily through sound, would study music. In composition, I am able to paint colours on the stave as if they were a canvas, each brushstroke a note. In studio production, I can take soundwaves and mould them into whatever I desire, creating an entire new mix of colours.

Some of my friends have quipped that I shouldn’t really be in sound; I should be in lighting instead. At the beginning of this year when I helped out with sound at a music festival, the guy on lighting found out about my synesthesia. On the final night he let me dictate exactly what colour scheme he needed to display when songs started playing. It was surreal how all the pieces fitted together and oh, how it glowed. I’m an emotional gal, so tears of joy were definitely shed. To have hundreds of people see the world through my eyes for just a single shining moment was an honour indeed.

While I still have a long way to go, having a career that involves the creation of music is my dream.