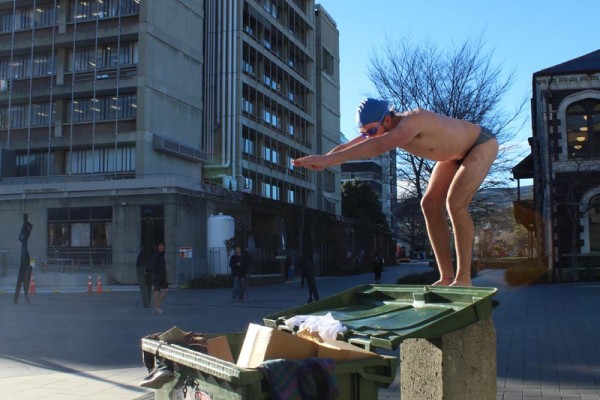 Poverty for students is often so fundamentally ingrained that it can be hard to recognise — we make jokes about the lads who live off two-minute noodles and inhabit flats with holes in the walls. It’s scarfie culture down to the bone; golden and beloved. It’s easy to forget that Mi Goreng, no matter how delicious, is often not a choice. It’s a lifestyle of bare necessities, lived by the people that struggle to get by from one StudyLink payment to the other.

A trend of dumpster diving has reared its slimy head in recent years. The food is free, and you’re practically saving the environment from another landfill disaster. Food wastage is hugely problematic, especially when there are people going hungry in Dunedin. More and more students have been getting behind the practice as a way to cut down on grocery costs, with some reportedly living off their findings for weeks. Truth be told, the idea of dumpster diving scared me shitless. If you’re the kind of gal who never even got a detention in high school, the potential consequences of getting caught is not a particularly pleasant thought to entertain. Though the chances are slim, they exist, especially for places with security cameras. In 2009 there were three arrests in Dunedin for dumpster diving. Yet, despite this, Critic needed to know the truth. What is dumpster diving like, and is it a viable option for students to get a cheap feed?

I assembled a ragtag team of misfits to bumble along in some adventures. You know, the kind of people that are always unequivocally free on a Saturday night. Which turns out, was only my drunk flatmate, Alice.

Like any Saturday night plans, deciding what to wear was the biggest mission. I was inclined to wear my darkest clothes, but unfortunately that included my high school leavers hoodie lovingly branded with my surname on the back. Feeling like I might as well just tape my credit card information to my chest, it was clear we needed a change of plan. Not to mention that the balaclavas that Alice had somehow produced made it look like we were going to rob a bank rather than a dumpster. Which is how, half an hour later, we stumbled into the dark streets of Dunedin wearing our sluttiest miniskirts and bralettes. Looking like the opening sequence of Pretty Women, we blended right in with the hordes of drunk freshers spilling into town. It was the perfect basic bitch disguise.

Things started to perk up around Centre City New World. The dumpster was unlocked, but protected by a large fence and scary looking signs about surveillance. After a quick shot of liquid courage, we jumped the fence and scouted out our surroundings. It was pretty slim pickings, offerings of things like cardboard and packaging more so than anything decent. We found a couple of old apples and, weirdly enough, a bag of English muffins.
Not much to write home about, unless you are English, or a muffin.

Countdown at first glance appeared closed off by fences, only for us to slowly realise, like a pair of fucking idiots, that it’s accessible by street if you just walk around the other way. Here, the trouble is that the dumpsters are located by the loading bay, so late-night employees were loitering about. This is where our disguises really paid off. Inching our way further down the alleyway by looking like drunk thots —“Omg, why hasn’t Chad texted me back yet?” “Urgh, the line for 10Bar is so long” — we managed to stumble behind the bins without calling attention to our true intentions. We waited for our time to strike, only, to our disappointment, realising that the dumpsters were pretty piss poor. There were some bakery discards stewing in vegetable juice and cigarette ashes. It was a split-second decision of whether to grab it or leave it; ultimately, we decided that we’d probably just rather go home and suffer through another flat meal of under-salted spaghetti bolognese than risk getting sick. We closed the lid on the bread with a shared heavy heart.

The dumpsters outside Night ‘n Day are one of the most technically challenging, but by far one of the most rewarding. The dumpsters are practically located on the street, unlocked and oh-so-seductive. But it’s a Saturday night, everyone and their neighbours are pissing around outside the store, eating lukewarm chips and smoking darts. Waiting for the coast to clear was like waiting for your lecturer to finally upload your grades on eVision—it’s just never fucking going to happen. To kill time, we made conversation with a couple of Polytech students. Ryan —if you’re out there, I’m sorry about the death of your childhood dog, truly I am. Thanks for showing me several blurry pictures of your golden Labrador, Bailey, before propositioning to finger me in the bathrooms of McDonald’s. Maybe we’ll meet again in another life. When the crowds had thinned down a bit, we took the opportunity to explore the dumpster. Surprisingly plentiful, we yielded a bounty of controversial deli items, such as chocolate cheesecake, butter chicken fusion rice, and ham sandwiches. The haul was like your grandma’s funeral spread, a little bit sad, a bit thick on the relish, but also wonderfully exotic.

Last, but not least, Couplands. After suffering locked dumpster followed by locked dumpster, this was the motherload. An empty carpark, no cameras in sight, and a glory hole of pies, pastries and produce. Granted, these weren’t the pies you probably would go for; much like the fleeting men in my life, there’s a reason they got dumped. Rather than buy a cheeky mince and cheese pie for the already lucrative price of $1, why not scavenge for a mince and vegetable pie that you could keep in your freezer for the next two months? There were trash bags stuffed with the most average food you could imagine. Think afghan biscuits, lamingtons and bread scrolls. It was like the sad birthday party of that girl with no friends in primary school, which your mum dragged you along to out of social obligation. So eager were we to revel in the beautiful garbage, Alice accidentally flashed her underwear to several wandering passers-by.

To be fair, when you’re already breaking one law, suddenly public indecency doesn’t seem like a big thing to add to the list. Plus, miniskirts aren’t the most practical clothing choice, though we did get some cute snaps for the ‘gram.

What did we learn? Stay away from the big supermarkets, it’s really not worth it. They’re the places with the biggest security and minimal pay-off. Supermarkets also have remarkably small food wastage now, due to charitable programmes such as the Countdown Food Rescue programme, which in 2016 donated more than $3.5 million of food. Rather, consider checking out your neighbourhood dairy or convenience store. Granted, a lot of these are locked, but you’ll find the occasional one that will surprise you. Couplands and Night ’n’ Day were definitely the winners here, with enough carbs for Alice and I to binge eat our feelings for the next couple of weeks. You can catch me crying in a lecture with a stale iced bun (that’s a joke, you wouldn’t catch me in a lecture.) However, maybe instead of encouraging students to go out and raid their neighbourhood bins, there should be more public pressure put on corporations to donate to food banks, so people in need can access this support. Foodshare has done an amazing job in Dunedin, collecting excess food from businesses and donating it to charities. If you are thinking about going dumpster diving, approach it as if you’re having sex for the first time. You need to do your research, stay safe, maybe bring some friends to stand and watch. Gloves aren’t a bad idea, but don’t be afraid to just throw yourself into it. Really wallow in that filth, you self-loathing bastard.