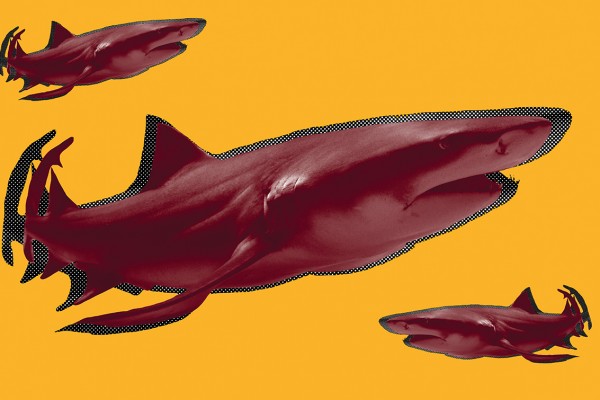 Sexing It up in Shark Week

Considering lesbians probably have this shit down - this one is for the cis heteros who for some reason are still queasy when it comes to periods and sex.

The only time anyone is ever excited about a period is after a pregnancy scare. However, just because periods can ruin your underwear doesn’t mean they have to ruin your sex life. We are a generation that literally licks other people’s assholes, so getting it on during shark week shouldn’t be an issue. Having sex on your period isn’t going to kill anyone.

For the vagina owners:

Sometimes fucking can seem daunting when you’re bloated, hormonal and your vag looks like the elevator doors in The Shining. However, if you can put aside your insecurities, it can be just as good as regular sex with a few added benefits. There is no need for hot water bottles and painkillers, orgasms can help with those pesky cramps. That rush of endorphins you get during climax can actually reduce cramps in some women. So not only can you have sex, but you can also relax afterwards. Believe it or not, but orgasms can also make your period shorter. The contractions during climax push out the endometrial debris which in turn will decrease the length of your period. This can make things messier, but if you are worried about that, then just have sex in the shower or put a towel down on the bed. Another obvious benefit is that you don’t need lube and it can make sex more enjoyable. Women are generally more hormonal when menstruating, therefore periods can increase your sex drive and make you more sensitive. Although fucking on your period has many benefits, there are some obvious downsides. The first one is obviously that you’re on your period. That sucks. The second is that yes you can still get pregnant on your period; while it’s less likely to happen than while you’re ovulating, it does still happen. Also, sperm can live inside you for up to 7 days so there is a risk of getting pregnant later. Don’t be silly wrap up his willy. The final downside is that you are more susceptible to STIs. On your period your cervix opens wider to allow blood to pass through more easily. Unfortunately, this also means STIs can enter more easily too. So just be mindful of that when you want to get it on. Many women can be incredibly insecure about their periods during sex and that’s completely normal. What’s important to remember is that 30% of women actively have sex during their periods. It’s not gross, it’s natural. We’ve been doing it for thousands of years. If your partner is straight out disgusted by periods, doesn’t want to go near you during shark week and turns it into blowjob week, then you should probably adjust your age settings on Tinder and go find a real man.

For the penis owners:

Getting it on with your missus on her period may seem off-putting. But don’t bag it till you try it. Chances are if you did it with the lights off you wouldn’t even notice. However, if you do get queasy at the sight of blood try having sex in the shower. Don’t worry you aren’t going to look like a Jackson Pollock painting after sex, women only lose about 2-3 tablespoons of blood during the menstruation cycle. It also isn’t going to run off your penis in streaks of red. Period blood is much thicker than regular blood. Similar consistency to mucus, vaginal juices or your semen if you haven’t had a fap for a few days. So there’s not going to be puddles of blood all over your bed. If it’s that weird period smell you are worried about, there’s this thing called body wash and she probably will use it before so don’t stress about that. The blood itself should hardly smell, especially if she’s healthy. A foul smelling period only occurs if she has some kind of infection or isn’t changing her tampons or pads frequently enough. Girls generally stay on top of this kind of thing so I doubt you will experience that. If you are genuinely freaked out by periods, then you shouldn’t be. Half the human race gets them as well as a range of other mammals. If you are worried about the amount of blood coming from a human woman then just imagine your fear around female elephants. Periods are just as natural as your boner so there’s nothing to be afraid of. A quick google should give you all the info you missed out on during sex ed. Just remember, if it wasn’t for your dad then you would have ended up as a period. Period blood is not dirty, you won’t get any disease or infection from period blood. If you could, then there would be no women alive today. If you are ok with putting your penis in her butt then you should be ok with a little bit of blood. Also a woman’s breast gets swollen before and during her period, so that’s a win for you. If you haven’t tried it yet and you and your partner both want to, then just go for it. Just remember that it will be way more daunting for her on her first time than it is for you. So just be a general good cunt and encourage her. A guy who still wants to fuck you on your period shows maturity and is a big turn on for women.

You don’t have to miss out on sex every month. Just lay down a towel and go to town. Period sex is natural, normal and fun. There is nothing to be afraid of. So, if you and your partner are ready to try it then don’t let Aunt Flow stop you. Just have a bloody good time.