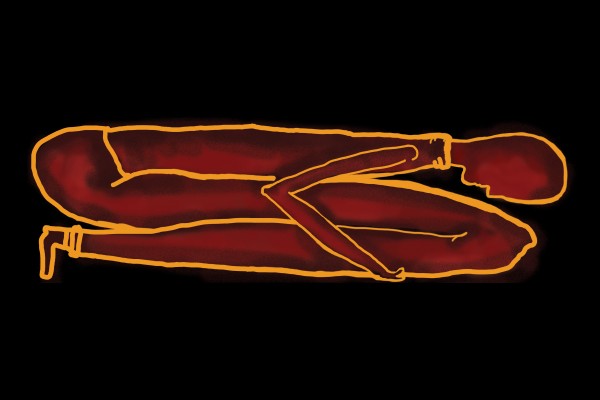 Menstruation is a complicated thing: the biology, the mess, the weird food cravings, the sexual urges, and, most of all, talking about it. Periods are like Superman – you never know who is hiding the suit under their clothes. They could strike anytime, anywhere. Before we continue, it needs to be acknowledged that not all bleeders are female.

For those of you who don’t get periods, here’s a brief movie summary:

You’re being a right cow to all your mates, but you also have an insatiable sexual appetite. Your skin is blotchy and pimply due to the huge quantities of chocolate that you’ve been consuming, and then, to top it all off, when you finally duck into the putrid Archway toilets between lectures, your favourite pair of undies are ruined.

Peeing blood is usually a sign of an illness that should urgently be addressed (unless you’ve been going mad on the beetroot). To be honest, the same should be said for periods - they deserve to be treated with a little respect. Although it is just an organ doing its thang, it can still be uncomfortable and painful, and those in pain should not be ashamed of their suffering.

This is the complicated line that needs to be navigated here. When is it acceptable to talk about these bodily functions? How do we normalise it? To what degree? Walking into work and blurting out what a great cry-wank you had that morning is totally inappropriate, so where do we stand on period chat?

Perhaps the difference is that an individual’s sexual privacy and adventures of pleasure, for the most part, are voluntarily initiated. Periods on the other hand, are not. They just happen, like a migraine or a leg cramp – you don’t get to decide when they strike. And being bullied for pain you don’t want to be going through sucks. Most importantly, pain and periods need to be talked about to raise awareness for instances when someone is suffering.

It should be acknowledged that menstruating is not at all the same kind of “pee-bleeding” you get from a kidney infection. These are totally different regions of the body. Nevertheless, you can get many different types of periods – long ones, short ones, intermittent ones, heavy ones, fast ones, painful ones. One of the most common causes of complications and pain in menstruation and conception is endometriosis. Endometriosis affects up to 10% of menstruaters – that’s 176 million people worldwide. Normally in a period, the endometrium thickens and sheds, following a flux in hormones that responds to the lack of an egg implantation (hence the bleeding). With endometriosis, the endometrium tissue grows outside the uterus. You can end up with lumps of tissue that try to shed on the ovary, on the intestines or near the spine. As you can imagine, having tissue shedding with nowhere to go hurts – and this is just one example of a period-related situation that needs more publicity.

In general, periods need more publicity. They need to be normalised. Because they ARE normal! They happen once a month from around the ages of ten to fifty. That’s 40 x 12 = 480 times, at least, where your mother, sister, girlfriend, cousin, grandmother, aunty, niece, grand-daughter will go to the toilet and be like, “FUCK I’M PEEING BLOOD”.

The issue with periods is that half of the world does not experience them. They do not have that annoying day every month when you inevitably decided to wear your *fuck me drawers* and it turned out to be a really bad call. They will never know what it feels like to have an entire organ pull away from itself, inside and outside. They will never know how normal that is.