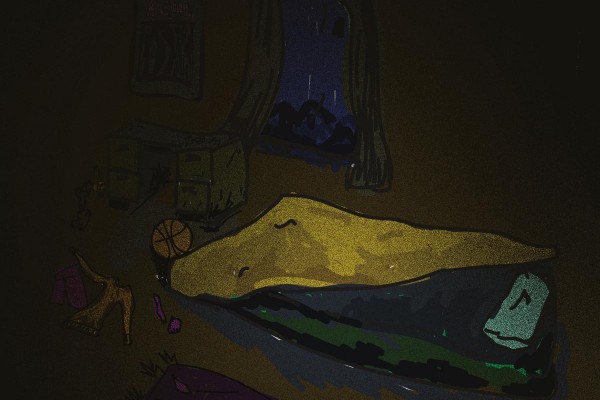 The Mystery of The Disappearing Fuckboi or: The Narrow Escape In The Hyde Street Sex Attic

OK boys and girls, ladies and gents, strap yourself in because boy do I have a story for you.

I am a first-year health science student who has recently been freed from a messy relationship, and I’ve been looking to get back on the horse - so naturally I turned to Tinder. Armed with a witty bio about fresher fetish (a definite thing judging by the responses, btw) and some snazzy yet saucy Rhythm & Alps pics from the summer, I set about swiping all possible bachelors.

I was looking at endless dead animal photo shoots and receiving some of the most mind-bogglingly rude pick-up lines, when a familiar face popped up on my screen - a schoolmate of my ex, and a good looking one at that. I swipe right and boom, immediate match. Conversation ensues, and we are hitting it off.

A week and a bit pass and he invites me to his flat. I politely decline, as I don’t want to seem too interested. The old cat and mouse routine works a treat though, because when Saturday 21st April rolls around, I get another message. Yes, that was the day of Hyde. That was a red flag.

He asks if I will be in town tonight, I say maybe, and he gives me his number in case I do go out.

I decide not to, and have a girls night in; it was a good night but I was alone by 11:30 and, with nothing to do, I flick him a text: “I’m in bed, what are you up to?” Turns out he’s in bed too; he invites me round to watch a movie and chill out. I put on skinny jeans (the ultimate ‘not tonight, no sex allowed’ barrier) and I make myself a promise to not sleep with this boy.

He meets me on the end of the street, in jandals (off to a great start), and he leads me into his maze of a flat. His room is the attic but it feels more like a dungeon. He explains why his bed has no base and because we’re on Hyde, I accept the explanation.

He and his room smell like a mix of darts, cruisers and nail polish remover but again, because it’s Hyde, I don’t think much of it.

So we’re in bed, and I’m still in my skinny jeans, but he doesn’t reach for his laptop, instead he reaches for me and since it’s been a while since a boy showed any actual affection for me I let him. A typical teenage sloppy make out session was in full swing when he became a little more than just affectionate. I stopped him, staying true to my inner promise and he agreed to chill out. We cuddled and talked; he told me about his ex and I told him about mine. We have a lot in common and he seems really great – certainly not the Tinder murder mystery that I had envisioned in my head when I saw first saw his sex dungeon/sex attic.

He finds me funny, which is a rarity, and he begins to play with my hair. Most women out there will agree with me that when someone plays with your hair, the game is well and truly over. I snuggle closer, and apparently that constitutes a green light as we begin round two of tonsil hockey. This time it’s different; we are more comfortable, and he is more sober; clothes are removed, and the windows steam up ever so slightly (could be to do with the altitude – but I’m unsure). One thing leads to another and you can fill in the blanks.

I feel a little pissed off I’ve broken my personal promise, but in the moment my choices seem to be very rewarding.

Explosions and fireworks ensue as the finale comes to a successful end. Endorphins flood my brain and I roll over into a happy little ball. He gets out of bed, grabs his phone and pulls out a dart; he asks if I want to join him outside for one, and I decline and ask for a glass of water instead. He tells me to keep the bed warm as he climbs down out of the now confirmed sex attic. I text all my friends with the updates and do my best to look somewhat dignified for his return. Ten minutes go by and he hasn’t come back, so I send him a cheeky text along the lines of “I hope you haven’t died”.

Then another ten minutes pass, and I haven’t heard anything, and he has not returned. I send another text message, as I am now genuinely worried about his wellbeing. I ask if he is okay and I still don’t get a reply. It is now 2:40am and my exhaustion takes over, so I end up falling asleep.

An hour and a bit later I wake up, alone. It has now been almost two hours since he left and my death by Tinder murder is looking more and more likely. I decide to ring him, maybe I will be able to hear his ringtone downstairs and check he hasn’t perished in a pool of tactical spew. It goes straight to voicemail. This is when I decide to get the fuck out of there.

I clamber down the world’s steepest stairs and into the main part of the top floor. I notice the bathroom lights are on but the doors are wide open and no one is up. My fight or flight response is in overdrive and I creep down the stairs, only to find more bathrooms with lights on and no one in them. Maybe my post-Hyde Houdini was looking for something in the bathroom? I then notice another light.

I enter a kitchen and the fridge door is wide open. Yet there is not a soul awake in this flat.

My logical brain has long gone, and the only thought now crossing my mind is that I am in a Stephen King psychological thriller. I do my best to orientate myself and manage to find a side door. I make a break for it and sprint the whole way home.

I ring him one last time, as maybe he heard me leave and wants to know I am okay, but receive no answer, so obviously not. I get into my single bed and manage to sleep right up until 9:30am.

I wake up expecting an “I am so sorry about that” text, or maybe even a “that was fun but we shouldn’t do it again,” but nothing. Nada. Zilch.

At 8pm that night I send another text: “Hey, just genuinely concerned you might be dead, let me know?” Again, nothing.

This boy is an Amelia Earheart copycat of the finest form. He wins top marks for committing to his cause. That’s when I see it, the little green dot beside his profile picture on Facebook. Active. Alive. Asshole. I decide that this is the final straw, and wipe him from my mind.

Cut to current day, I’m living my best ‘no one hates a health sci more than a health sci hates themselves’ life. I’m leaving St. Dave after another soul draining 3pm chem sesh, checking what types of carbs will be on tonight’s menu, when we bump into one another. Our eyes lock and what do I get? Silence. Pure nothingness.

So, I pose this question to Critic and its readers: