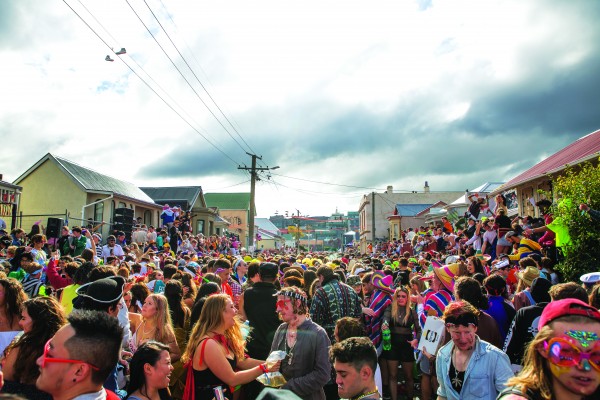 On paper, Hyde Street is really dumb, right? Or is it just me? You pay for your ticket, you buy your shit costume from one of the five shitty stores which make all their money at this time of the year and you drink enough to convince yourself you had a great time. Who would be dumb enough to do that? Well . . . me, for the second time, along with around 3600 other students. So, for all you first years, those who didn’t win the lottery and those who didn’t go on principle because “Hyde street is just so commercial now maaaaaan,” here’s how it went down.

My day started at a relatively late 7am with a cold beer in the shower to soothe my body into the harsh punishment it would be receiving all day. Our costumes were thrown on, a quick shot was taken, and we were off to another flat for the pre-drinking to commence. Drinks for the day ranged from cider to goon, all carefully picked to ensure maximum drunkenness while ensuring no major blackouts occurred. As my last Hyde Street had ended with me literally dragged from the gutter by a concerned senior citizen and deposited on my flat’s doorstep (only to discover I’d received a concussion), extra care was taken to ensure a level of intoxication juuuuust before that state.

Pre-drinking is quite possibly the most important part of any event, from your senior ball to your bitchy aunt’s funeral, and Hyde is no exception. Balancing this can be tricky. Too little and you’ll find yourself unable to really have a good time, too much and you just end up getting left behind while everyone else has fun. We all managed to ride that fine line in between, getting ourselves nice and merry while the girls took the required thousand photos in order to post three on Instagram. The first casualty of the day occurred, with one of the partygoers locating and breaking a hoverboard within two minutes of getting on it. This bastard had already claimed multiple casualties at previous parties, so its destruction was probably a public service.

With one bruised arse, we set off. One of the immutable laws of the universe is that, if more than three women are travelling at once, there will be at least one bathroom break. Fortunately, this took place at uni, so there were multiple toilets to choose from. Unfortunately, our group had not read Critic’s “Great Campus Toilet Review” and there was five minutes of drunken debate before one was chosen. Finally, the girls all piled in to the Link toilets, to powder their noses, talk about boys, and whatever else it is girls do instead of pooing.

Eventually, after another bathroom break when we found out one of us “didn’t need to go before but now they really did,” we made it. 10am, people already stumbling around and the distinct smell of fresh urine floating along the breeze. There’s something truly liberating about being drunk during the day. And Hyde Street just amps up that feeling of freedom to a whole new level. Like a casino or three-hour lab, as soon as you’re in the gates at Hyde, everything outside of it ceases to exist. That assignment that’s due Monday morning? Who cares? That $40,000 student loan that’s just getting bigger with every paper you retake? That’s Future You’s problem. Present You is just gonna drink some more and try not to puke where a cop can see you.

To their credit, the staff, volunteers, and police at Hyde were fantastic. They were chill, got in on the fun with us and sorted out those who were a little bit too merry. It’s easy for us to get pissed off at the police for shutting down parties or telling you to not drink in public, but as far as the police force goes, we’re pretty fucking lucky – and not just because anyone can walk into a Starbucks here. A special shout-out goes to the one officer who told an intoxicated student he just had to step outside for a moment. “But you’ll let me back in, right?” the student asked, stepping out of the party with the naïve sincerity that only children and drunk scarfies can have. When the cop told him he couldn’t let him back in and he should go home, you could see his heart break and all belief in the goodness of the world disappear. Hopefully he went home, sobered up and realised that life isn’t always so cruel. Never give up your faith in the world, random dude who got too drunk at Hyde. Never give up.

For those readers who haven’t been, there’s not actually anything organised at Hyde. There are the flat themes, but the fun is up to you to make. So, the best parts of Hyde are the people-watching, and overhearing the drunken shenanigans taking place everywhere you look. Such as the girl extolling the virtues of staying hydrated to her friend who was temporarily incapacitated. “Love, drink this water or I’m leaving you in the gutter.” One girl, upon seeing her friend fall over, didn’t even bother to help, just telling her “Look at you, you’re wasting alcohol – just drink it”. Or the one Lad™ who was so fried that he attempted to drink first from a crucifix around his neck, then a pair of binoculars before finally figuring out what object in his vicinity was actually his beverage. At least he got there in the end.

Seeing the creativity of the costumes is another highlight of Hyde, and this year people were bringing their A-game. Stand-outs were the gender-swapped Mermaid Man and Barnacle Boy combo, which really should be on TV, I did also see a nun covered in blood which I confused momentarily for a hallucination brought on by excessive cheap boxed wine, so thanks for scaring the shit out of me like that, creepy nun girl. There was also the guy dressed as rapper 6ix9nine, who many thought was just repping LGBTQ flat, but hey it’s the thought that counts right? Critic was expecting the theme of “Soundcloud Bros and Trap Hoes” to bring at least one fuckwit thinking blackface is OK in 2018, but apparently no commerce students had seen the theme, thank god.

Sadly, not everyone was keen to just have a good time and enjoy the madness. The amount of times we were aggressively bumped into started to get ridiculous. We weren’t actually sure where they were going, maybe there was just something really cool about drinking on the other side of the street. For once the girls were the worst culprits – many an elbow was thrown as they pushed through us. There’s nothing more emasculating than having the wind knocked out of you by a slutty David Bain half your size. However, we found that a quick squirt of goon to the face or back was a good deterrent for those who got a bit too aggressive, and for the most part managed to avoid real injury.

At some point in the day I remembered Critic wasn’t just paying me to drink myself to death, they also expected some quality journalism, hard-hitting questions and decent writing. They really should have gotten someone else. But still, off I went, disappearing into the crowd to find out what everyone really thought of Hyde. Even after sifting through all the “OOMMG HYYDE SOO GOOD” and “HYDE ST CUNT WOO” it was a pretty positive response. One particular girl who said she was having a wonderful time with her friend Molly told me “the atmosphere feels like a social hug”. One second year who had spent $100 on tickets told me it was absolutely worth the money, which tells me that OUSA needs to continue raising the price – $35 is just allowing the riff-raff in. It wasn’t all positive though, with one student commenting that there were “no quality sausages”. When asked if she meant the free food on offer or the male students, the answer was “both”. Hopefully she found at least one that met her ambitious standards. One attempt was made to speak to some of the volunteers, quickly rebuffed after I was told that they were told not to speak to press, which is probably the nicest thing anyone has ever called Critic.

Eventually, it was time to call it a day. People had started filtering out, and you never want to be at Hyde Street once 50% have left. Then you’re just left with the hosts, the extra drunk and the seedy dudes trying desperately to convince someone, anyone, to come home with them. So, we called our sober driver, peeled one flatmate off the curb, and headed home. Some people would regroup at home, sink some more piss and head out again to see where the night takes them. But alas we were too poor and too old, opting to order pizza and watch Storks, the strangest animated film of all time.