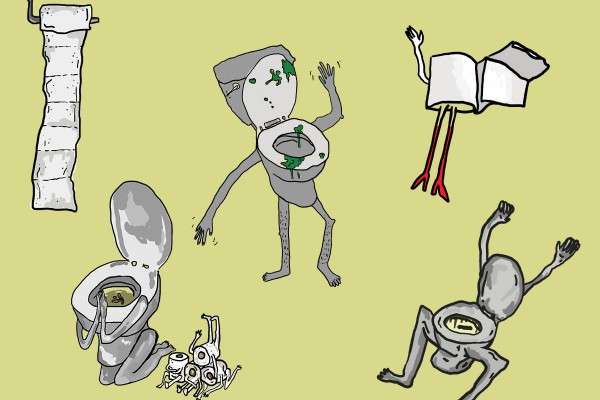 Shitting is an activity that we must all undertake, sometimes with great urgency. As a person who much prefers to make deposits in the comfort of my own home, when I receive nature’s call on campus I can’t help but curse the gods for my grave misfortune. This is mostly due to the Uni’s godforsaken single ply shit paper, which is a truly cruel and unusual form of torture.

Admittedly, I am a male, and since most toilets at the University are still segregated, the analysis in this article is limited to the ‘Gents’. I do not know how different the ‘Ladies’ room is (I presume it has more pink). Nevertheless, I sincerely hope that members of other genders will be able to benefit equally from this in-depth analysis.

I am a regular patron of the Central Library toilets. When deciding where to make a deposit, it is important to bear in mind one important factor – cubicles per capita. The Central Library has approximately 12 men’s toilets. This represents a lower cubicle per capita than Calcutta, and the inhabitants of that city get around that problem by pooing on the side of the road. Unless the University drastically changes its Code of Conduct, however, we’re just going to have to put up with waiting awkwardly for a cubicle.

The Central Library toilets are also hampered by the inability of the Wi-Fi to penetrate through their walls. As soon as you step through those doors your phone is transported to a prehistoric era of confusion and boredom. The only option is to begrudgingly read Critic.

Then there is the issue of ventilation. With hundreds of people letting off more nuclear bombs than Kim Jong Un in a space with no windows or airflow whatsoever, it is no surprise that someone actually died from exposure to radiation last year (not that the University cares). You’d better hope that your speed-shitting game is on point when venturing to poo in Central. Otherwise, you risk growing fingers for nipples.

When the Commerce Building went through its massive re-design, I was worried. So much had changed: the stairs, the café, the atrium. It was shiny and new, and everything was different. I explored it nervously, but found with a huge sigh of relief that the toilets has remained untouched. Thank the lord.

The oasis of peaceful defecation that is the third floor Commerce Building toilets is simply one of the best places on the whole campus. It’s nothing fancy; the toilets are old and the cubicles are uninspired boxes. But when you’re in there for your 6th coffee poo of the night at 3am with an assignment due the next day, the baby blue walls have a truly calming effect – like my mothers voice or a can of Speight’s.

They’re not the nicest – they can be draughty, the seats can be a little cold, but I will fight anyone who speaks a bad word about these hidden delights.

A major problem with the Law Library toilets is that they are in the Law Library, which is full of autocratic overlords armed with Daddy’s credit card. If you make any sound at all, which you probably will have to in order to reach the toilets (since they are located in the centre of the library), you will be stabbed with the piercing glare of numerous JAFAS and JAFES in puffer vests and stripes.

If you make it to the toilets without capitulating, you will discover that there is a room complete with a toilet and a sink. Just a singular toilet in each location, so you may encounter a line, but if you luck out you’re in for a treat – a perfect cocoon of crapping privacy. It’s just a damn shame they had to be put in the Law Library. However, if you are a self-conscious shitter be aware of the fact that anyone impatiently waiting outside will be able to hear excessive noise.

Despite its drawbacks, Critic implores our readers to go to the Law Library, have a turd, and then leave. It doesn’t even need to go in the toilet, anywhere will do!

Archway
Anyone who has ever been to Archway will know the disgusting tiles throughout the hallways. These don’t stop at the toilet doors. No sir-ee Bob. The only difference is that in the toilets themselves, the décor includes a nice dousing of urine. And just when you think those orange cubicles have stopped, they come back at ya like a tonne of bricks. One perk is the sense of self-satisfaction you gain knowing Law students have to traipse through the piss-soaked floors day-in, day-out.

The School of Surveying

The only toilets on campus with beer holders, seeing as surveyors are the biggest bunch of drunkards in the history of mankind. These are the people who design our roads, no wonder we have such high crash rates.

Very average. The prospect of shitting in Burns will give the reader an opportunity to experience depositing in the former Soviet Union. Partly because all humanities students are communists, but mainly because the architect who designed that abomination of a building had a look at the old KGB Torture Department, and said, “yeah we’ll have a bit of that.”

The cubicle doors open inwards, so you’ve got to squeeze in beside the toilet in order to shut the door.

Unless your bladder is actually on the point of bursting, I would highly recommend dashing to the Castle lecture theatre toilets — stat.

Scientists take very very very smelly poos, probably due to all the chemicals they ingest from cooking meth.

The Link (Opposite the Student ID Office)

The good news is that the Link has a surprisingly high cubicle per capita value. The bad news is that this is because there are about eight cubicles, side by side as far as the eye can see. These cubicles vastly increase the change of “doubling” – an offence where a person craps in the cubicle next to a cubicle someone is already crapping in. If that rule applied in the Link there would be a lot of executions. You could even end up with the dreaded “triple,” by pooing in between two cubicles occupied by fellow shitters. Anyone who dares commit such a crime should be taken out the back and shot.

The St David toilets are a fucking shambles. I don’t think they actually came up with a design before they installed them. Firstly, the disabled shitter is its own separate room with a separate door, after you’ve walked inside the main door. There’s plenty enough space for it to have been a cubicle.

There is a good 50 to 60 metres between the basins and the handtowels. Natural rivers have formed with the drips of wet hands that fall on the floor during the journey.

The general area is too square. The urinals take up a disproportionate amount of space, and there’s a very large ‘dead patch’ in the middle that’s just underutilised floor.

The strange layout means that there are two normal sized cubicles, and one incredibly long one. It has a normal width, but there’s enough room for an entire football field between the door and the toilet. It’s very disconcerting.

The toilet seats are comfy and the close proximity to the door is great, but this whole room just weirds me out.

To sum up this analysis it must be said that personally, I prefer to wait until I’m home unless the turtle is poking its head out of my tradesman’s entrance. If I have to, I prefer the Law Library. Shitting in between books is exhilarating.