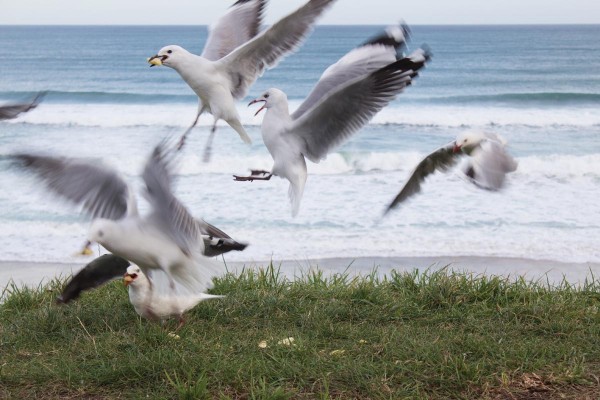 Fish and chips are the ultimate feed for students. They’re cheap, they’re unhealthy, they don’t ask questions or judge your lifestyle choices. Critic have left no salty stone unturned in the noble quest to deduce the best fish and chips available to the good residents of North Dunedin, and the results are in . . .

The not-very-aptly-named Golden Sun is a bit hit-and-miss which it comes down to the crunch (or lack thereof). The meal was given to us in a plastic bag, which is not only environmentally unfriendly, but also causes the dreaded “bag-sog,” a cruel condition that occurs when hot food is placed into a plastic bag, and the condensation causes the food within to lose its crispness.
Bag-sog notwithstanding, the chips were the right price. Offering a respectable 256.7 grams of chip for a basement price of $2, they weren’t that great. Tom from Radio1 kept going back for more. “I’m hungry,” he explained earnestly. “I don’t know how fresh they are. Were they cold and soggy when you bought them?”

Also at the meagre price of $2, a piece of hoki was sampled. “It’s hard to imagine it being in the sea,” declared News Editor Charlie. Few of us particularly like fish, so the fact that it didn’t much taste like fish was a positive. “Not a lot of fish in here,” complained Critic Editor Joel. “It’s a real bullshit fish.”

Golden Sun’s hot dog situation, on the other hand, really saved the day. Comparable to the average kiwi bloke, at 6.5 inches, the hot dog featured a traditional pink sav in a batter that left the lips feeling nice and oily. “I’m feeling satisfied by this dog,” remarked Joel, shifting suspiciously in his seat.

The chips really let the team down, so maybe avoid those and double up on an extra hot dog instead.

At Fish Hook, they take their fish seriously – and there are simply too many options of fish breeds to choose from. When we asked for the cheapest bit of fish, we were given elephant fish, for the outrageous sum of $5.50. It tasted more like fish than elephant, and Charlie believes that this particular fish “definitely came from the sea.” If you’re in it for the batter, the fish is sub-par and there’s too much actual fish meat. There’s not much of a taste, but your conservative mum would really enjoy it accompanied by a salad comprised of iceberg lettuce, tomato, grated carrot and a lemon wedge, right before giving your dad a sad handy for his birthday.

Speaking of red raw savs, the 6.5 inch hot dog did not contain a real sav – it was a run-of-the-mill sausage. And if any old battered sausage can impale itself on a wooden stick and pose as a hot dog then we are in a bit of trouble here.

At $3.50 for 276.2g of chips, the overall vibe in the room was one of resignation and defeat. The salt was a bit too liberally applied, and the potato was stodgy and bland.

‘A real return to form’

Once the perennial kings of the Critic Fish ‘n Chips Review, Squiddies has seen an unfortunate drop in its reputation.

Maybe it was just because we’ve all had a few too many experiences being incredibly hungover scrounging on the flatmate’s cold leftover chips from the night before, but we didn’t have high expectations going in.

We take it all back. The 340g bag of crinkle cuts was just crunchy enough, but not too much. Salt levels were on point. Props for the little paper bag too - perfect for the muncher on the move.

But while their chips were probably the second the best we sampled, they were let down by the rest of the menu. The fish was decent, but nothing special, and clearly just a frozen fish from the supermarket. Tasted OK, definitely not disappointing for what we paid, but not impressive either.

The hotdog was a letdown. Joel wouldn’t shut up about how much he enjoyed the sauce (unsure if it’s a secret recipe or he was just really feeling it that day), but there was way too much batter on the outside, meaning it was more of a sausage coated in puffy bread coating than a crispy outer layer.

Overall, it exceeded expectations and signified a real return to form.

The most attractive option for the exercise-intolerant among us, Union Grill holds a certain “you don’t have to walk anywhere” appeal for those wishing to ride the FnC train during study hours. But be warned; a casual deep-fry of fries and onion rings is all you can score after 2.30pm, so we reviewed these items. At an eyebrow-raising $4 (up an entire 33% from last year’s $3 – sort your shit out Union Grill), the chips were 271.3g of disappointment, kind of like an unwanted pregnancy. Unimaginative and seriously lacking in seasoning, these unsalty thicc bois basically seemed like the kind of bad cafe chips that only generous helping of aioli could salvage. But fuck that, we were not going to purchase a meagre tub of aioli for $1.

The onion rings, though weighing less at 192.4g and costing more at $4.50, cheered us up no end. “A cohesive unit of soft onion and batter with a real burst of sweetness balanced with salt,” Joel happily offered. Designer Erin Broughton would like all her potential suitors to know that “if you propose to someone with an onion ring, the Union Grill onion ring is the way to go.”

Unwrapping Mei Wah was like a wedding night fantasy. One large piece of newsprint enveloping the food, lovingly sealed with a piece of tape. No cardboard boxes like the other joints, this here was an homage to the poky Caversham fish and chip shops of the ‘90s. The chips were the OG, real-deal “fish and chip” chips – none of those annoying pseudo-fancy thick-cut cafe chips they serve in Auckland. The crunch of the chips even holds up as they cool down. “And that’s something very special,” Joel remarked lovingly.

Caught up in her childhood, Chelle was awash with memories of “fish and chips with the family on a Friday night in the 90s.” Awkwardly, we left her to cry into a beer at her desk while we resumed the feast.

At a modest 5.7 inches, the hotdog lacked pitch and the batter was understated, but the sav was true. “It’s okay for the sav to be the star,” Joel reminded us. “It’s not a fight.”

The fish was perfectly battered, and wasn’t offensively fishy.

Each item only cost $2, which means you could have a feast fit for a king with loose change or roughly 20 minutes of unlicensed busking. Mei Wah is a star. All the girls want to be her, and all the guys want to be with her.