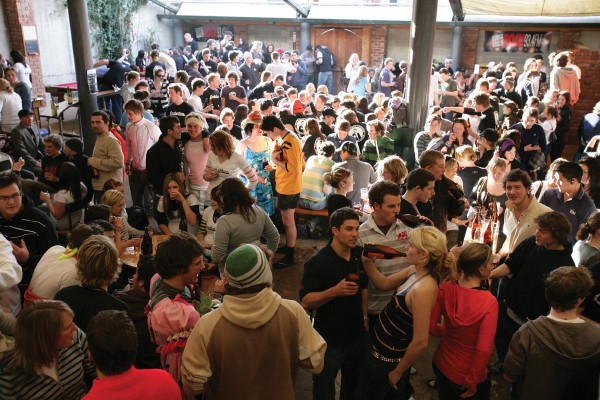 The Demise of the Student Pub

I was 16 years old the first time I ever illegally set foot in a nightclub, and that night in 2001 would pinpoint the start of a love affair with Dunedin’s vibrant student pubs and clubs scene.

My friends and I spent our final year of high school partying up a storm underage, drunk with freedom in a city which had loose liquor licensing laws, and bouncers who just couldn’t say no to young ladies. Dunedin was our oyster, and the sordid requisite of “having ID” was flippantly ignored. All you had to do was diligently copy the previous night’s stamp onto your wrist and claim you lost your ID last night, or simply walk in as if you owned the place.

“Going to town” in Dunedin was fucking awesome back in the day. There was no need to preload, because all the clubs sold “house doubles” (read: cheap bottom-shelf alcohol) for $2, or, on some nights, $1. Nobody bothered straying toward the Octagon, because that was where older people drank. Besides, why bother going all that way when you had seven student pubs within a 1km radius? Here were the main suspects in Dunedin’s student pub scene of yesteryear:

Home of the Cook-A-Thon (est. 1999), which was an all-day drinking event whereby $20 got you entry, a 12oz beer, two meals, a t-shirt, and an STD. On a Wednesday night, the upstairs dance bar served $1 doubles, and the ground floor had a huge garden bar, a TAB bar, a bistro, and pokies for that one mate who was positive he could beat Queen of the Nile.

The Outback (later known as Urban Factory, now an empty building) was for those who loved shots and dancing – the real Jersey Shore of the scene, if you will. A designated Shot Shack was set up away from the bar, so that you could just line up for your shots, which were given to you in a plastic shot glass on a necklace. By the end of the night you’d be staggering around the d-floor with a bunch of these shot glasses around your neck, and everyone would know what a mad cunt you were. The Outback served the Backdraft shot, which involved toking up alcohol fumes and sucking black sambuca and chartreuse up through a straw. Another crowd fave was the scorpion shot, which had an actual scorpion in it – on a lucky night, you’d see scorpion parts in your vomit. The Outback strongly facilitated getting wet and naked, throwing a massive foam party every O-Week (the origin of the first fresher flu epidemic), and selling 50c shots to people participating in International Nude Day.

Possibly one of the most epic student pubs, enjoying many controversial promotions including (but not limited to):

- 5 cent beer night.
- Bring in a live horse for a free crate.
- Crate days, where you brought in your own crate to watch the cricket.
- “Wife beater Wednesdays,” encouraging people to wear singlets for cheap beer.
- That time the owner offered a litre of beer for a litre of petrol, with the chance to win a box of matches and a couch doused in petrol. The Liquor Licensing Authority made him close the bar for a whopping three days.

The University bought the Bowler and turned it into some really fucking exciting offices. Thanks for nothing. Former owner of the Bowler, Mark Deason, stated “good luck to them. It will be interesting in five to 10 years when this whole country is sober.”

This bar offered an all-drinks $2 special until midnight, and would randomly yell over the loudspeaker, “everyone to the back bar for free shots!” which would result in most of the bar stampeding down and having shots poured into their mouths from a sordid little hole in the wall (in hindsight, this pub was a huge fire hazard). There was no ventilation in Two Bears, so perhaps the free booze was to distract people from the condensation on the walls.

Owned by a creepy dude who would invite young ladies to have a spa out the back, this was where everyone would end up when everything else had shut. Offering the laziest DJ in the world who had a playlist that he played in the same fucking order every week, KCs was mainly good for going to get the $2 doubles and a free fishbowl on your birthday before heading to more respectable joints.

Monkey Bar was said to have given away around 1000 free drinks every night of O-Week, with $3 drinks available until midnight. A huge place where the dance floor featured a central pit, it became seedier and seedier over the years, developed a dancefloor called ‘the sex pit’ until you’d go in and realize you were probably one of the few unarmed patrons. The guy who owned Monkey Bar fled the country in debt, probably from all the free drinks he gave away to students.

The Gardies was the crown jewel of Castle Street, hosting International Nude Day, beloved holiday of All Black, Highlander, and Sports Café presenter Marc Ellis. Ellis also judged the regular Beerable Arts competition there, usually streaking during the competition. Students would flock there specifically to see him nude. Sadly turned into a study centre (Marsh), the closure of the Gardies heralded a turning point in Otago scarfie culture.

I caught up with Marc Ellis to chat about how things have changed in Dunedin. He was at the Satay Noodle House, “a happy place” for him, tucking into a seafood deluxe. He once tried to purchase his former happy place, the Gardies, however when the University got wind of this, they swooped in and snatched it from him. “The pub had an evaluation at $1.1 million, and when the university heard we were trying to buy it, [with] the breweries’ backing, they paid $1.6 million for it – and that’s in the middle of a global financial crisis.” Interestingly, the University found this stack of money at a time when they apparently could not even muster the funds to keep various departments fully staffed. Critic uncovered emails using the Official Information Act which showed the University purchased Gardies with no proposed plan of how they were going to use the property, simply to stop Marc from getting his hands on it.

Ellis had hoped to keep the Gardies as a pub owned by students, for students. “We were going to sell shares for $1000 to students. So if it cost $1.2 million, you’d get 1200 shareholders – we don’t own it anymore by that stage, it’s owned by the students. So you’ve got 1200 people who have a vested interest in ensuring it goes well, so they come down and have a beer, it’s actually a really simple strategy. But the University runs Dunedin, so the council would be on your back, and then you’ve got the legislators making it difficult, they can red tape you and make your life an absolute misery. It’s sad, isn’t it, university now is so different because you’ve got a board of grey-headed old white men making decisions which are just totally off pace with the evolving world. And they get it wrong – they’ve just ripped the heart and soul out of the university.”

Ellis has a point. With the elimination or reimagining of student pubs like the Gardies, the Bowler and the Cook, our neighbourhood has really changed. North Dunedin used to be a special place to blow off steam during uni. “It was a really beautiful melting pot and focal point for people from different courses, and different lifestyles and backgrounds, to meet, and to bond,” Marc stated. “And to remove that, and force them to try and hope to meet like-minded souls in the octagon, with everyone else, and the general punters wanting a beer after work, it just doesn’t work.”

He also looked at buying the Cook and making it a Speight’s pub, but agreed that liquor licensing laws, coupled with supermarket prices, makes it really hard. “When we were at university, you’d pay $20 at the supermarket for a dozen beers, and you’d buy a jug for $4 at the pub. Beer cost you the same no matter where you went. But now, you buy a jug of beer, it’s bloody $35! It’s just absurd!”

I told him that pints at pint night at UBar (formerly ReFuel) are $5 now.

“Wow. Pint nights are $5? So you’re paying $60 for a dozen beers? That’s well over double. And you’re all having a beer underneath the watchful gaze of their security cameras. It’s actually a bloody embarrassment”. He laughs in disbelief. “What’s the logic of the university, seriously? Trying to get rid of the pubs so there are 1000 people at 10 different flat parties, which is harder to control than 1000 people at one pub.”

“There are a lot of things conspiring against the survival of the student pub. You could bring it back, but you’d be fighting battles with all these bloody puritans and board members. Congratulations to the grey-headed old fuckwits who’ve sanitised university. Well done!”

But the student pub dream remains.