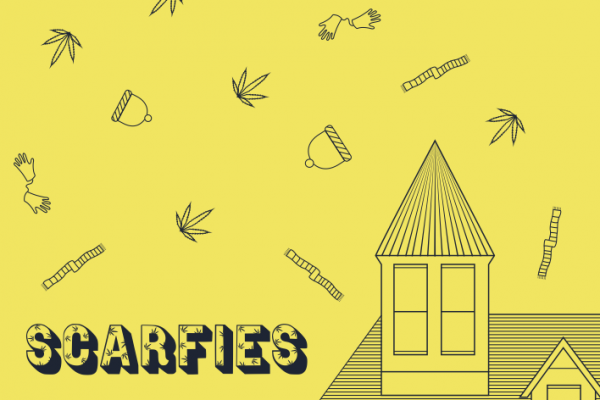 Scarfies: The Film That Gave Taika Waititi His Big Break

An empty flat. A quarter of a million dollars worth of weed. A drug dealer that wants to kill you. And you’ve taken him hostage in your basement. What would you do?

That was the question asked by Robert Sarkie’s 1999 film “Scarfies,” the movie that put Dunedin and its notorious student culture on the big screen for the first time. It also kickstarted the careers of dozens of kiwi filmmakers, including the current toast of Hollywood, Taika Waititi.

For years, “Scarfies” was the defining cultural export of North Dunedin. It was shown every year at O-Week and Capping Week, and every prospective fresher would watch it at home in wonder at the ruckus shit that awaited them in Dunedin.

For Robert Sarkies, who wrote and directed it alongside his brother and long-time collaborator Duncan, it was the realisation of an idea that had been kicking around his brain for three years, and a dream he’d had since he was ten years old.

Five first year students find an empty flat. It’s a fucking shithole and cold as balls, but there are two selling points: free rent, and free power. Then they discover something amazing: a basement chock-full of weed. They flick the whole lot off to a local dealer, and suddenly they have more money than any of them know what to do with. But soon it all comes crashing down. The owner of the house comes back, and he wants to know what they’ve done with his stash.

“It was basically a ‘what if,’” Robert said. “You take a group of extremely naive characters and put them in an extremely stressful situation which would ultimately drive them to be prepared to commit murder.”

“It was my first film, so I just wanted something with an interesting enough story that even if I fucked it up, it had potential to succeed.”

Wikipedia lists the budget as $78,000, a number repeated on a few other websites. I asked Robert what it was like shooting on such a low budget, and he was dumbfounded. “No, that’s not right at all. Weird.”

While that figure may sound plausible today, in the pre-digital age and shooting on film, it wasn’t even in the ballpark. If he couldn’t get funding from the Film Commission, Sarkies reckoned he could raise some money and get it done for a minimum of $250,000. As it turned out, the Commission snapped the script up at the first opportunity and gave them $1.6 million to get it done.

The fact that it was falsely attributed as a micro-budget project doesn’t upset Sarkies, in fact it’s exactly what he was going for. Given the chance to shoot on a higher quality 35mm film, he turned the offer down. “I didn’t want the film to be slick, I didn’t want it to look great, I wanted it to have a bit of Dunedin grunge to it. But yes, we spent $1.6 million to make the film look kind of shitty. And it worked, it looks shittier every year!”

The lower quality film achieved that grungy look, and allowed him to treat his film stock with what he calls “healthy disrespect . . . I didn’t have to worry about pressing the button, I could pretend I was shooting on a digital”.

Although he “could never admit it to the ODT” at the time, his entire plan was to ensure that the Dunedin portrayed in the film looked grey and miserable. “I wanted to capture that gloomy feeling of mid-winter Dunedin,” he said. “We had a six week shoot and we only had five days of exterior shooting – any time the weather was shitty we went outside and shot, any time it was beautiful and sunny we filmed inside.”

“I just had to hoodwink Dunedin.”

Ask Robert Sarkies about Taika Waititi and he’ll repeat the word “cool” five times in the space of thirty seconds.

“I remember seeing his [audition] tape and thinking ‘Well he’s just fucking cool’. It was obvious back then. It was not obvious that he’d go on to direct “Thor,” but his screen presence was just undeniable coolness. He’s just cool. I was like the opposite of cool, I’m just some little film geek, but he was just effortlessly like ‘Here I am, I’m cool and I’m funny’. There was no competition. I just went ‘well, there’s our Alex.’”

Waititi, who was credited on the film as Taika Cohen, had been living in Berlin and working as a painter, but getting cast in his first feature film was enough to draw him back home.

His character Alex starts out as a lovable rogue, but soon leads the flatties down a dark path.

“Alex is a bit of a control freak, but in a really subtle way,” Waititi said, describing his character. “He really tries to avoid any emotional situation. Towards the end of the movie you’ll realise just how spiteful and nasty he can be, but there are some really likeable traits about Alex.”

Despite stunning the casting team with his audition tape, Robert said Taika hit a few bumps along the way, “I remember the first day on set it was slightly tricky, he just wasn’t clicking into it. He was trying, but there was something slightly flat about it. But by the second day on set – just by observing the more experienced actors on set, he just totally clicked into it and he was an incredible presence every time we rolled the camera.”

Robert won’t take any credit for inspiring Taika to become what he is today, at least not directly. “I guess “Scarfies” gave him that chance to see what average directing looked like and think ‘Oh, I could do better than that.’”

Robert and Taika did work together again on a couple of commercials and a “terrible” TV drama called “The Strip”. “I think that was the show that made him decide he didn’t just want to be an actor,” Robert said, “because it was a pretty horrible show.”

Looking back, he never could have guessed that his nerdy filmmaking and comedy friends would be the global superstars they are today.

“Taika, Bret McKenzie, Jermaine Clement – I knew all those guys when they were just doing shows at a little theatre in Wellington. I remember thinking to myself ‘Gosh, there’s so much talent here, it’s a shame that only Wellingtonians are going to get to see them’. Little did I know.”

In the final interview of the DVD special features, Taika is asked what he hopes to do in the future. “I wanna be in “Lord of the Rings,”” he replies, “I reckon I could play Gollum quite well, eh.”

49 Brown Street, which is both the real and fictional address, was for a time the most iconic of all the student flats. It was the 660 Castle Street of the early 2000s.

Robert was wandering the streets of Dunedin one evening, when he looked up from the Speight’s brewery and saw 49 Brown sitting in its iconic place on the skyline. “That’s gotta be the scarfies’ house,” he thought. It was dingy, and dark, and its hilltop view meant that the whole city could be captured in one shot.

Unfortunately, like most student flats, it was way too small to get a film crew inside. The party scenes, any of the scenes in the hallway, and a couple of the bedroom scenes were all shot in the actual house, but the kitchen, lounge and basement don’t exist.

What they needed was a set that was even worse than the house, which was pretty shit. “I basically wanted to create an environment that an audience could smell and feel the cold of,” Robert said.

There was an old abandoned building in Roslyn, which was slated for demolition. It was covered in mould and hadn’t seen a bar of soap in a decade. It was perfect. All the set dressing and texture was there already, which worked out because they couldn’t afford it anyway.

The producers offered the contractors some money to halt the demolition and let them film there for a few weeks. They wouldn’t allow that, but they did allow the crew to help take it apart. The crew took out entire rooms and replanted them in their makeshift studio – an abandoned car park building on Princes Street. Their unconventional filming space meant the basement had to be built on the second story.

Of the 50 people that made up the cast and crew, only one member of the crew had ever had a role in a feature film before. It was a crew of first-timers, from the directors to the actors to the producer.

For Robert, it was important that it wasn’t a cynically made film; it was young people making a film about young people. This meant that the culture depicted had some truth to it, which is why it resonated.

“It reflected something of a spirit of a place, a time and an age, that I was able to do because I lived all that. I didn’t lock anyone in a basement or contemplate murder or even smoke a lot of dope, but I’d been immersed in that world for years”.

“Every time you put something out into the world, and it resonates with the culture, it becomes part of the culture,” he said. “It was my dream that it would help give that culture, for a period, a specific identity, in the same way the capping shows of old and the Dunedin Sound did.”