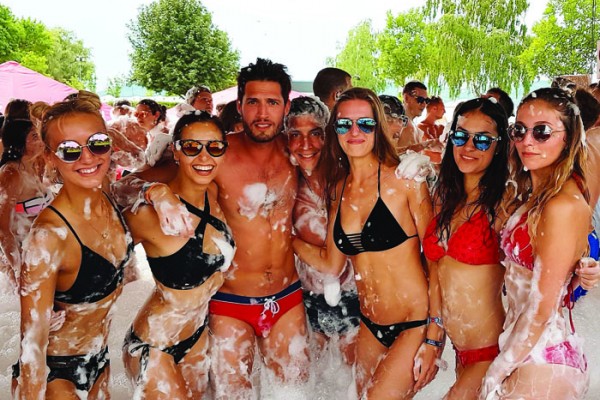 Tindersurfing: (noun) The act of travelling around the world while finding accommodation only through the app “Tinder”.

For 25-year-old Belgian Anthony Botta, “every day is a date”.

That’s the slogan of his YouTube channel, Zebotta Official, where he documents his adventures using Tinder to find accommodation on a trip that’s taken him all over the world.

Using the hookup app to satiate his wanderlust (among other things) was in part inspired by one of Botta’s favourite YouTube channels, Yes Theory, where the idea is to say yes to everything and explore any opportunity life throws one’s way.

“If you don’t try, you don’t know,” he remarked good-naturedly as we chatted early on a Saturday morning via Skype. It was early for me but late for him, due to the 12-hour time difference between Dunedin and Brussels. As I nursed a black coffee, he tended a beer while I asked him a few questions, which grew cheekier by the minute.

Botta’s family are pretty understanding about his travel lodgings arrangements. His father told him, “well, you’re 25, if you wanna go on a road trip and sleep with ladies every night, I won’t blame you - just do it” (presumably uttered in a jealous tone). His grandmother was somewhat alarmed to see Anthony in the news, as she wasn’t aware of his Tinder cavorting before the press got hold of the story. “She saw me in the news in my red Speedos with four ladies, and was like, ‘what is this?!’” he said.

On Anthony’s YouTube channel, Zebotta Official, the videos are all created and edited by himself, using his Samsung phone - an impressive feat, considering the quality of the work and his level of (in)experience. “I have no cameras, nothing. I use iMovie, and I’ve never done any editing. For the first five episodes a friend of mine showed me, then I did it all myself,” he said, adding that he’d like to focus on improving making videos. “I’ve never filmed anything before, I’ve never edited anything before, so I want to give myself a year to get better, then do it for longer.”

Anthony’s experiences with Tindersurfing have been, for the most part, quite positive. He’s never turned down a Tinder host upon meeting them (“I should have! [chuckles] Maybe sometimes, but no”). Lacking somewhere to stay isn’t usually a problem either, although there was one instance when he wanted to go to Vienna and couldn’t find anyone there . . . “so I just skipped Vienna and went straight to Bratislava.” The fact that he speaks several languages (Spanish, Italian, French, English, Dutch) certainly helps to overcome any potential language barriers; his YouTube videos show him interacting with his hosts in a mixture of tongues.

When asked how many people he has had sex with so far on his trip, Botta remained coy. “I’ve never said the truth, and if I said the truth probably nobody would believe me!” There haven’t been any threesomes as yet, nor trysts with other guys. However, he is keen to try Grindrsurfing, as a fun aside for his followers. “I’ll have to make it really clear in the beginning that I don’t want to try any gay stuff, but I think it should be a fun video.”

Botta’s best sexual encounters have been with Polish women, and he also rates Poland as the country with the hottest women. To complete the trifecta, his best night out was also in Poland. “It was in Krakow,” he reminisced. “I’ve been there before with my friends to this amazing poly hostel, it’s called ‘Greg and Tom’ and I swear it’s the best hostel I’ve ever been to. So when I was in Krakow, I didn’t even look for a Tinder host. I said ‘alright, I wanna stay in the Greg and Tom hostel and go out.’ It’s the kind of night where you pay ten dollars and they bring you unlimited vodka for an hour. I ended up pretty drunk that night [laughs].”

The best Tinder host in Anthony’s opinion was Guilia, a beautiful Italian who featured in episode three on Zebotta. “She was super lovely, I was supposed to spend maybe one or two nights and I think I spent maybe four or five. We just clicked very well, and had a great time,” he said. “We’re still in touch now. I was kind of sad to leave, because it was summer, and [we would] do only cool stuff like drinking wine every day, [it was] so nice. But then I had promised myself I would go on this massive trip, and she had to go back to see family, so . . .”

In contrast, the worst Tinder host he encountered was a Portuguese lady in Poland. “She was living in what you’d call a shithole, really. She told me ‘yeah it’s like 5 mins away from the station,’ but it was like, SO far away. It was more than half an hour of walking. It was super hot, I had to walk with my backpack, and I got there super sweaty.” To make matters worse, “it was so small that we had to eat sitting on the bed,” and he was refused a shower because she needed to do the dishes. “I’m like, ‘what’s the problem with the dishes and the shower?’ And she’s like, ‘I do the dishes in the shower,’” he recalled with residual dread. He described his eventual shower. “I was showering and the water wouldn’t go, and I was like, ‘what the fuck is that?’ and it was like, this massive ball of hair . . . ugh that was disgusting.”

I asked Botta what he has learned so far from his various interactions with people. “There are so many different people in this world, and if you don’t go on trips like that, if you don’t get out of your comfort zone, you’ll never meet them.” He swears he has met a lot of weird people, but has also learned how friendly and accommodating people can be. In Poland, he was treated to a surprise encounter. “One of my dreams was to meet a UFC champion,” he explained. “[Top UFC fighter] Karolina Kowalkiewicz was fighting, so I showed up at her gym and asked to meet her.” The coaches told Botta they would call Kowalkiewicz to see if she would come to meet him. “And like you know, she’s a massive champion, super famous, and the next morning she came to hang out with me and was like, ‘yeah, we can train together,’ and I was like, ‘oh my god. SO NICE.’ My motto would be, if you don’t try, you don’t know,” Botta added.

With New Zealand (and Dunedin!) set firmly in his sights, Anthony plans to be here around late April to early May. “I’m coming with a friend to NZ and one thing we would like to go on is a massive university night out,” he said. When asked if he was excited to be visiting our humble country, Botta gushed, “Oh my god. So much yes – it’s always been a dream of mine to come. Because if you look at a map of Belgium and NZ, these might be like the two furthest countries ever.” He wasted no time jumping on to our Tinder to see what the community was like. “I have received so many nice messages. It’s looking good - I’m so pumped up. If I didn’t have my job I’d leave tomorrow! [laughs].”

Anthony offered some advice for anyone considering Tindersurfing. “Just be yourself, be a bit different on Tinder, like don’t go for the ‘hey what’s up’ - that’s not really working, so try to be a bit different.” He recommended safety first, adding, “be careful with anything that you do, ‘cause you never know what can happen, but in the end it’s all good.” The downside, he cautioned, is that “it’s tough to do it for two months, to be with different people every day and tell the same stories every day.” His advice is to “do a bit of Tindersurfing, a bit of hostel stays, a bit of meeting friends and mix it up. Sometimes it’s good to be at your own place, chilling on Instagram, YouTube and doing nothing, instead of having only Tinder dates every night, and never being at home.”

I left Anthony enjoying the silky feel of his own legs - his Tinder host in Holland was kind enough to subject him to a leg wax.