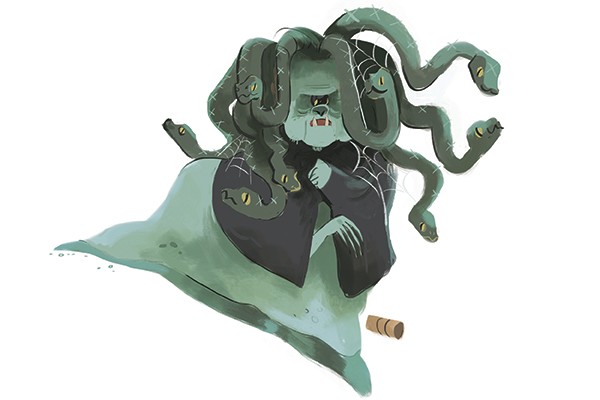 Though technically an adult, I can’t shake the thought that there are still monsters living beneath my bed. My childhood bogeymen have multiplied like germs, and now my room is full of beasts with which to come to terms. In the quiet of the night, when I’m almost asleep, something wakes me. It’s the rustle of a creature that by day I never see. When they come out to play, I tuck my feet into the warm and cosy duvet. In the shadows of the room, I’m sure I’m being watched by the creepiest of creatures. They're scuttling about, making love with one another in the dead of the night.

This is a record of my hauntings. He’s my seedy, needy stalker, sends me letters in the day. I like to burn these quick smart, in the hope he’ll go away. He used to be my lover - my little Stevia Daddy. Lighter on the sugar than he could have been, though what I was in for I should have seen, and boy did he taste good. When I was through with him, ready to move on to better things, I found out that Student Loan Stevia Daddy clings. He used to be the one to give me honey, but now it’s him that wants the money. When I rest my head on the pillow at night, dreaming of non-instant coffee, he sits on my head and gives me a fright. He’s wizened and crispy, with a long hooked nose, his boiled egg head is wispy, and how his mouth goes and goes! Beneath his pubic-looking moustache, thin lips gasp, “You slut, you haven’t seen my last. I don’t care if you can’t afford a bus fare. Don’t even dream of a house, you’ll never afford one for even a louse. When I’m through with you, I’ll see you haven’t enough for even a nice stone stew." Can I pay him off, make him go away? "You can’t go overseas," he says, “Until you give me what I want." He holds a greasy calculator in his orange, flaky, hand and cackles at me from the nightstand. “Without me," he says, “You wouldn’t be the person you are these days. I made you, you fuck! Without me you’d be down on your luck! It’s not my fault you're a sleaze, who puts out for shitty degrees! Ain’t my problem you’re a slob who can’t get a proper job! You owe me a lot, so, my love, forget me not! I’ll turn up in your room, every night till you’re 80, under the light of the moon, you’ll wish you never met me! I’ll make you fret, I’m set to throw down threats until you’ve paid me back all your debts.” The Student Loan Goblin has a new, older girlfriend and she is a spiteful witch. She hides in the ceiling, where the insulation should be. I think sometimes I hear her rasping lungfuls in the roof space as I try to study. At night she snakes through the cracks in my ceiling to spy on me. She has hair made of snakes, each with the face of a different ex-landlord of mine. Looking into these eyes is mesmerising, and can entrap you for hours into thinking about all the unfortunate and mysterious curses of your previous castle. The spores in the air that magically flew up the noses of you and your bosom friends as you adventured, and made it hard to breathe. The way every room was enchanted ice every winter. The way the walls were so thin you could hear the princess in the next room being awoken from her slumber by a handsome prince. The hag is not finished yet - she is more than ready to curse you in new and crafty ways. If you venture to the privy in the middle of the night by the light of your ICandle, she’s bound to slither into the ancient wiring and snuff out the loo light. She’ll clog up the ancient plumbing and smile at you from the base of the bowl as a failed flushing. As you urgently struggle to vanquish her with the icy-handled plunger, she’ll laugh squawkingly and splash spoiled water on your precious slippers. Next morning, she’ll shapeshift into your evil-stepflatmate who’ll quip, “I heard you in the bathroom last night, and frankly, I’m not going in there till you sort your disgusting mess,” and your landlord who’ll claim, “You must have been flushing inappropriate things, I’ll send my plumber over and he’ll give you a quote”. Her snake hair whispers something about the “unsightly student area” as the Housing Hag cradles the Student Loan Goblin in her dusty embrace. They’ll laugh at me happily ever after from their big cosy bed of avocado toast in the attic; following me from flat to flat as my frost bitten toes fall off one by one. Look, it’s not like I need a job to live. They are really over-rated. The Job Jabberwocky reminds me this as he shape shifts into the objects in my room. His saucer-wide eyes blink at me from the lampshade. He has a rasping, grasping voice. “Don’t worry love," he whispers, "Nobody cares about money anyway. Money can’t make you a good person, a generous person, a likeable person. Money can’t buy you friends, or love, or health." He turns into my ratty couch. He turns it purple. He makes it a chaise-lounge and becomes a version of me wearing very expensive shoes and lies down on himself. This new version of me looks like she’s fresh out of the salon. I think she’s heading to a meeting, holding a new iPhone. She looks corporate in a tailored suit. "She’s just a well-coiffed cog in the capitalist machine,” grates out the Job Jabberwocky, as he flips my lookalike’s hair, and whips out her credit card. She buys a coffee, and she doesn’t care how much it costs. “She’s not even thinking about the environmental impact of takeaway cups,” the Jabberwocky jabbers, sounding sandy. The walls shimmer and melt into another room. It's her office, she’s there five minutes early, eyeing a couple of awards on the wall. There’s someone here to see her. She’s politely anxious about standing on their heads on the way up the corporate ladder. “I'm desperate to crush the skulls of my corporate rivals.” The Jabberwocky’s voice unravels from my alter-ego’s mouth. Her head is full of plans, she’s a part of something. She’s forgotten the time when she was scared she wouldn’t get a job. The Jabberwocky makes the new me smile, joker-like, from a new boutique office chair in my once-scrubby desk space. My eyes meet my own, glinting, a hollow purple on the other side of the room. She spits carelessly out - “Look, kids these days want everything handed to them on a plate. There’s a job out there for everyone, they just aren’t trying hard enough.” Abrupt, I wake up. It’s Donald Trump. On my lovely lady lumps. On my rump. Although the shit that chump spins makes me need a stomach pump, he’s here on all my bumps. While I was sleeping this shlump whumped his arse onto my humps. I’m retching because he smells like a rubbish dump, I’m retching because he’s not very fetching, I’m retching because he’s a terrible president. Why is he sitting on my bumps like they’re tree stumps? Who’d have thunk that lump Trump would have slunk out of his White House bunker, just to slump his great plump rump on my first class crumpers? You know what? That grump Trump opens his sump and pumps out this gumpf: “My name is Donald Trump! Yes! You may be stumped as to why my dump trunk has jumped onto your plump junk. I’ve more important spunk to be thumping than your very bad bumper. I’m an important man, a hunter, an alpha-male, founder father, a real brother to the punks in the gutter, a comfort to the mothers whose kids hunger, a punter of grunty health care cover, a plumber of depths and getter of stunners’ numbers.” Trump, that sucker, was on some sorta upper, as previously I thought the clout to spout words of more than one syllable was, for him, too much of a workout. Between wheezing from the squeezing of his rear-end sneezer, I cry “Please!” (though my plea does not appease him to ease his weight on me, the detainee). “Mr President, I’m still flummoxed as to why you think it’s alright to enter my home at night and alight your buttocks on my hummocks.” Then Trump, the gump, pouts and pumps his single clump of remaining brain cells and, addressing my lampshade, stumps out, "I just start kissing them. It’s like a magnet. Just kiss. I don’t even wait. Grab them by the pussy. You can do anything. And when you’re a star they let you do it. You can do anything.” Is that the sound of rain gently patting at the window?  I relax into my duvet. The sound of rain is so peaceful. I am sure I will fall asleep, drift away from consciousness, gently lulled by the sound of rain. Oddly, even though it is raining, I begin to feel scorching hot under the blankets that were so cosy just a moment ago. I throw off the blankets and head to the window to let in a breeze. Parting the curtains, I peer out into the dark night, as dark as oil spill. I blink and suddenly see it - the trees trunks are discarded tires, with sprite bottle bark and plastic bag leaves. The grass is ten thousand toothbrushes and lighters, waving at me in the fierce wind. The river down behind the house is a sludge of luminous green toxicity, upon which vast rafts of plastic bottles float. On top of these bottle rafts, whole hosts of sensible businessmen are on networking cruises. The air is thick with the smog of miscellaneous chemicals. Then disembodied glowing red eyes meet mine, just on the other side of the glass. There is a scratching sound, and I see that the eyes have hands associated with them. These are skinny gnarled, hands made of many disposable plastic razors. They scratch the outside of the window, but it sounds as though it is a blackboard. “Let me in dear. I want to hold you.” The voice oozes through the window, greasy and ghastly. “It’s me, your beautiful mother!”

I cower beneath the cover,
how will I ever get to sleep?
All around these creatures hover.
I almost begin to weep.
These beasts are going to multiply
Until the end is nigh.

It’s no comfort anymore to hear about the monsters that I fear,
that the beast under the bed is actually only in my head.