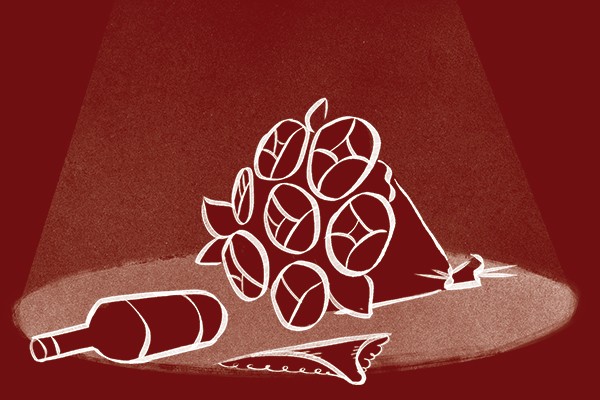 The History of the Capping Show

“Capping is a glorious time. It is a sort of annually recurring twenty-first birthday, where you feel like drinking a thousand beers and kissing a thousand girls and laughing a thousand times a day.” This quote from the 1929 University of Otago Capping Book expresses the culture of Otago’s iconic Capping Show; Otago students sharing in each other’s success. Ever since the very first capping ceremony, students have treated graduation not just as a celebration of one person’s achievements, but also as a chance to commend others and support those who have helped them along the way. In 1879 the first ever public graduation ceremony, or ‘Capping’, was held in the university library. Just two students were graduating, both with BAs, yet hundreds of men and women packed the library to cheer their departing peers.

By all accounts this was a dignified affair, and most of the audience was probably sober. At the time, Arts students were stereotyped on campus as studious and boring. Most were tee-totallers and opposed to liquor on religious grounds.

Ironically from today’s perspective, it was the medical students who were the early rabble-rousers. They took pride in their boozing and considered prohibitionism an absurd trend.

By the 1880s the ‘boozers’ had taken over the culture of Capping. In 1889 three thousand people packed out Garrison Hall by 5:30pm, even though the event would not start until 8:00. Students in the crowd disguised themselves in wigs and moustaches, playing trumpets, violins, rattles, or whatever they could get their hands on, loudly singing dirty parody songs. One student reportedly even brought a skeleton from the medical faculty and was striking notes across its ribcage. The rowdy crowd was unapologetically harsh about speeches they found boring – any speaker who droned on too long was met with loud snoring and chants of “turn it off”.

In 1886 the crowd was so lively that Sir Robert Stout, Premier of New Zealand, struggling to get a word in edgewise, threatened to have the police clear the hall if the students would not quiet down. But he took it too far when started issuing legal threats, saying “I see one person at the back who is making a noise. I know his name and if I am interrupted again I shall see that a summons is issued against him tomorrow”. This caused a mass walkout in protest. The students eventually returned to listen to the rest of the proceedings, but made no secret of their dislike for the Premier, booing loudly every time his name was mentioned. For the next two decades Sir Stout, who later became Chancellor of the university, was subject to various pranks at graduation ceremonies. Students would perform great hakas as he arrived, and chant “we want Stouty” as the speeches began, but when he finally reached the podium the crowd would in unison pull out newspapers and ignore him completely.

Students revelled in their ability to get under the skin of dignitaries like Sir Stout, and started to prepare rehearsed songs and sketches to perform before the ceremony. For many years the Capping ceremonies had their own theme song,

‘The Carnival Chorus’, which near every student at Otago knew by heart.

We’re here tonight in force
The students of Otago,
To welcome you of course,
To this – our great farrago [farrago: a confusing mess]

The official Capping Show began in 1894, and, like all great things, it was born out of a sense of rebellion. Fed-up with the unruly mess graduation had descended into, the university banned all public ceremonies.

Without a university-run event to crash, students took it upon themselves to create their own ceremony. A haphazard dinner and a series of concerts were thrown, which REVIEW (a predecessor to Critic) described as “a mongrel-debating-society-tea-fight-entertainment,” whatever that means.

When the university bowed to public demand and reinstated the graduation ceremonies in 1898, the Students’ Association decided to keep the ‘Capping Carnival’, as it was known, as its own independent show.\

In 1899 the Capping Procession was debuted, which grew wildly popular over the years. Clubs and Colleges would construct elaborate floats and parade them down the main streets of Dunedin. Male students dressed in drag would run alongside collecting money for worthy causes. If you did not donate you risked getting a kiss from one of the “ladies”. Many of the surrounding shops would close as people packed the streets to see the show. Upon reaching the Octagon, a student impersonating the Mayor would declare that graduating students now had ‘freedom of the city’. Going along with the joke, many shopkeepers would indeed provide graduating students with free drinks, meals and cigarettes.

In 1903 four boys known as the “Coon Quartet” dressed in blackface and sang a number of parody songs before performing a “Cake Walk”. A Cake Walk was an unfortunately common part of the Jim Crow-era Minstrel Show, in which a group of white actors in blackface would mockingly perform as black people making clumsy, foolish attempts to fit in with white people. The “Coon Quartet” performed to rave reviews for several years. In 1912 they increased their numbers up to six singers, and in 1919 they dropped the blackface in favour of clown costumes and renamed themselves the ‘Sextet’. They remain today one of the most beloved and esteemed parts of the Capping Show, though thankfully much less racist.

The Selwyn College ballet, known as the “Selwyn Sunbeams” debuted to hoots and hollers in 1928 and continues to this day, making it the world’s second oldest amateur ballet troupe, and by far the oldest all-male one. While today it is seen as a sort of initiation rite that all first year boys must perform in the ballet, in the early days it was seen as a prestigious honour, and residents of all ages would compete vigorously for a place on stage.

For a few years, the Selwyn Ballet was traditionally always followed by what was known as “the complete rabble”. Drunk attendees from a dance which was held at next door’s Victoria Hall would “simply charge through, get on stage, prance around for a bit, and then they’d go back to the dance”.

The show was a hit. Students, visiting parents, and Dunedin residents all loved it, and it became a sell-out every year. In the 1920s it was consistently providing almost 50 percent of OUSA’s annual budget. In 1922 the Otago Daily Times reported that 260 people stayed in line overnight waiting for tickets to come on sale at 8:00am Monday morning.

However, for all its successes, the Capping Show was disappointingly slow to adapt to the idea of gender equality. While it’s hard to call the university culture or the early 1900s egalitarian by any means, it was at least somewhat progressive by comparison with the rest of the country; women had been represented on OUSA since 1902. Yet pushes for inclusion in the Capping Show were repeatedly rebuffed. In 1907, the ‘Ladies’ Cloakroom’, a student suffragette club, organised a successful boycott of the show after songs they deemed offensive were not modified.

By the 1940s Otago was the only university still excluding women from performing, a practise that even then was described as “medieval” and “prejudicial”. In 1946 a petition was circulated to allow women to participate. The capping committee claimed they were simply trying to protect women from the “unsavoury incidents” backstage as a result of the “regrettable, but inevitable, amount of drunkenness amongst the men”. The result was a minor riot at the Students’ Association meeting, with Critic reporting “howls of rage” from both sides as women demanded a place in the show. After several minutes of indiscernible yelling, the motion was eventually passed.

Women were included in large numbers in 1947, but the men made it perfectly clear what they thought about it. One song from that year went like this:

Oh the feminists may sing
Of the improvements they bring
But the lesson that is taught us seems to me so very clear
The ingredients of Capping
That will set Dunedin clapping
And the mixture as before, Sirs, that is, music, boys, and beer!

Since then of course, the Capping Show has a fine tradition of social commentary from all walks of life, and today is often among the first to mock public figures they perceive to be prejudiced or bigoted.

The Capping Show has developed and changed so much in its 123-year history. We’ve lost traditions, and developed new ones and held on to some treasures. At its heart it has always been a cheeky mixture of prankster charm, deeper social commentary, and a fair amount of alcohol. The reviews from 1911 are as true today as they ever were; the show is inherently driven “by the influence of Johnnie Walker”.

In 1967 the great poet James K. Baxter wrote “I have always enjoyed Capping Revue and attended them where I could - chiefly on account of their vigour and their freedom of satire, both of which the country sorely needs”. It’s this youthful energy and willingness to shove a middle finger at whomever they please that has borne such a long and proud history for the show. May it live on for centuries to come.