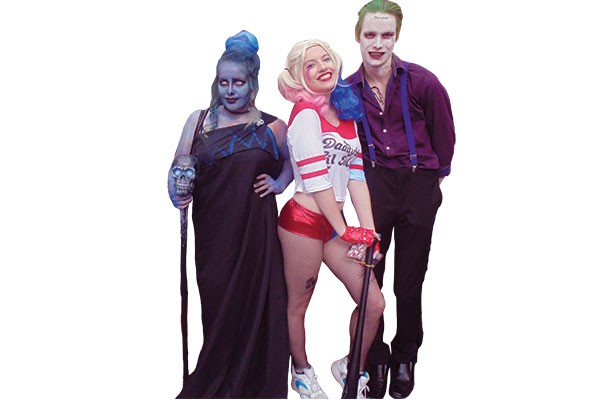 Cos It's All About The Play

The smell of makeup, face paint and coloured hairspray fills the air. Masses of people are all flocking to one place for a day of excitement, laughter and all out craziness.  For those of you thinking these are the sights and smells of the annual Hyde Street party, you are sadly mistaken. We are, in fact, referring to those of the annual Armageddon Expo which graced the Edgar Centre last weekend.

The two of us donned our makeup and face paint to morph from simple humans, Samuel and Victoria, into the Joker and Harley Quinn, Batman villains from the upcoming film Suicide Squad. As soon as our final touches were made, all traces of our human identities were gone. We were no longer two ordinary students...we were now The Clown Prince and Princess of Gotham. With baseball bat in hand and green hair spray lavishly applied, we set off to rip Bat-brains a new one.

For two days, nerds like us from all over Otago gathered at the Edgar Centre to celebrate all things anime, science fiction, and comic books. Stalls, special guests and competitions are all part of the fun at Armageddon Expo. The stalls are filled to the brim of all manner of geekery. There are replica swords and other weaponry, hats, plush toys, board games, t-shirts, and posters. This year Armageddon even had a local tattoo studio set up shop giving out tattoos to those wanting to immortalise their love for certain characters. Samuel bought a replica of Thor’s hammer for only $70. It’s made of hard plastic and metal, and is big enough to cave in a (fictional) enemy’s skull.

But the thing that stood out to us was the number of attendees who cosplayed. I remember the first time I heard the term “cosplay”. It was in 2012, where I attended Dunedin’s first Armageddon. It started as an Anime expo, confined to the small corridor in the Castle lecture theatre complex on campus. Auckland, Wellington and Christchurch all had the privilege of hosting an actual Armageddon expo. After popular demand from us nerds in Otago, it was announced that in 2012 Dunedin would get its own full-fledged comic book, sci-fi and anime convention.

Back then I was told Armageddon was New Zealand’s smaller version of the American Comic-Con so I was eager to attend. A group of my friends and I had decided that we would all dress as some form of comic book or anime character. I decided on Harley Quinn from The Batman Animated Series. For Dunedin’s inaugural Armadeddon we made our way in costume to the Edgar Centre. The line to the entrance was short, and there were no more than twenty stalls. Some people complained that it was nowhere near as good as the ones in Auckland and Wellington, but I was just as excited to be there.

There were other people in costume, we saw a Wolverine and Ash from Pokémon, for example, but not many. Everyone wanted their picture taken with us. We posed as our characters, and were praised for our fantastic cosplays. I remember thinking, “cosplay? What the heck is a cosplay?”

All over the world, cosplay has become increasingly popular in the last decade. Cosplaying is when everyday folks dress up as a character from a comic book, a video game, a film or TV series, and sometimes take on their character’s personality along with the costume. The word “cosplay” is an amalgamation of “cos” from costume, and “play” from role-play.

As we left the event, I heard more moans from disappointed fans that Dunedin’s attempt at Armageddon was a total rip off. I thought that because of the complaints, this would be the first and last Armageddon we got. I was wrong!

In 2013, it was announced that Armageddon would return to Dunedin again, so my friends and I started making our costumes. This time when we arrived at the venue, the line went right around the corner. We waited for about twenty minutes before getting inside. I entered the centre dressed as  Babydoll, from the Zack Snyder film Sucker Punch, I couldn’t believe my eyes - the majority of people in line were in cosplay. I knew that this was going to be an epic Armageddon. The venue was bigger, there were double the stalls, and we had celebrity guests, including the Sixth Dr from Dr Who, Colin Baker. What made me the happiest though, were all the costumes. There were hundreds of them, from anime to comics, to films and TV series, and even video games.

Part of the appeal of cosplaying is to be part of the cosplay community. Everyone is friendly and welcoming, asking to have photos with you and having banter between our chosen characters. This year we saw a Deadpool having a twerk off with a female Hades from Disney’s Hercules, a moment witnesses will cherish forever. Strangers aren’t strangers at Armageddon, they’re like a second family. They’re non-judgemental and always welcoming. You leave each Armageddon with new friends and crazy memories. “In ordinary life, I’m just a regular person.” Says local cosplayer Lucas Diao. “But as soon as I put on the costume, people started to recognise me. It’s cool to see people’s faces light up when they see your character and ask you for photos!”. Part of the cosplay fun is physically embodying your character beyond just the costume, bringing it to life. Walking through the arena floor becomes exciting, immersive, and unpredictable.

What is it about cosplay that gets ordinary people to dress up in crazy costumes? “Getting to be someone you’re not,” was Laura Rodgers’ response. “I’m a very shy person and when you’re Harley or other people you get to be very outgoing! You get to be different.” Shannon said “I feel it’s a way to get closer to the characters you love.”

The quality of the cosplay improves each year. For months, cosplayers slave away with their sewing machines and glue guns to create a costume that does their favourite character justice. Homemade costumes can be entered in the Cosplay Parade featured at the Expo, with the winners from each region facing off against one another for the ultimate prize of $500.

So how do cosplayers get into it? “I’ve always loved dressing up.” Says Shannon McCabe, who cosplayed as Rey from Star Wars: The Force Awakens. “My mum makes costumes for theatre. Even as a kid she was always dressing me and my brother up.” For others, the attraction to cosplay comes from wanting to join in the fun. “I had no idea it was a thing until I saw others doing it!” says Laura Rodgers, also dressed as Harley Quinn from the upcoming Suicide Squad. “I thought ‘that’s cool, that’s fun. I want to do that!’”

Warren Goodwin’s love of cosplay started in childhood. “I have been making things since I was a child and I was mainly into art” said Warren, who attended Armageddon this year as Rey from Star Wars. “At 11 years old I started to make costumes like C-3PO (Star Wars) and the Tinman (Wizard of Oz).” Warren has become a well-known cosplayer in the Dunedin cosplay community. His costume of Rocket Raccoon from Guardians of the Galaxy was so remarkable it attracted praise from the film’s creators. Warren has used his passion of cosplay to help create happiness for others. “[Cosplay] has become more of a passion and a lifestyle for me to make people happy and have an impact on people’s lives. Just recently I made an encouragement video dressed in my Rocket Raccoon cosplay to a boy with cancer in the U.S.” The video went on to inspire his mother to create a Child Cancer Awareness page on Facebook.

Warren also attended the Kids Fair in Auckland dressed as Rocket. “A mother, learning that I too have autism, took my hands and said that seeing how I am able to manage gave her hope for her son. Cosplay has become far more than just an annual fun event.”

Cosplay helps create happiness in those who see their favourite characters brought to life. “I love having people recognise and appreciate what you’re wearing.” Said Riley Goodman, a local cosplayer who’s been cosplaying for three years.

If this has encouraged you to start cosplaying, check out the “New Zealand Cosplay group” on Facebook! It’s a friendly and safe place to post cosplays, ask questions and learn how to make costumes!

And be sure to attend next year’s Armageddon. It’s a weekend guaranteed to bring out your inner nerd.