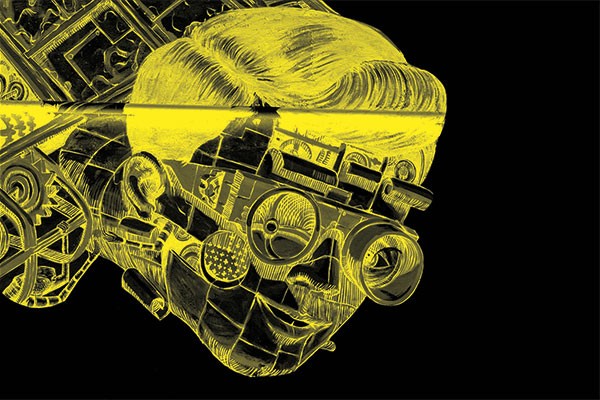 Bracing the atlantic chill, tucking my hands as close to my boobs as they could go within the bounds of social acceptability, I ventured into the city. With its tumbleweed Scrumpy bottles, prison-like structures and a heavy sky that hangs, permanently grey, it’s difficult to see the attraction. But there is an attraction, I swear. Otherwise I wouldn’t see those awkward tourists taking photos of bus stops all the time.

Dunedin is ideal for an art tour because everything is technically within walking distance. If you need groceries, alternative music, a strip club or a church, all that’s needed is a solid stroll that can draw you past many a creative image.

So out I went, immediately regretting not bringing gloves, past the mall and through the Octagon, following the trail map I downloaded from the DunedinNZ website to the first piece of work, the giant tuatara painted by Belgium artist, ROA, on the wall of BandAid on Bath Street. It’s amazing, it’s creepy, it’s like a monster from the city drains hiding among empty shops and eery cafes, trying to catch its tail in its jaws. Tuatara was one of the first big pieces of street art commissioned for the town (and there is a nifty time-lapse video of the process online). The Dunedin Street Art Facebook page began in 2014, and the arts sector of the Dunedin City Council got onto building a line up of artists both local and international to adorn our streets. From Pixel Pancho’s machine-like horse on 373 Princes Street to Mica Still’s psychedelic wolves and bears around Stafford Street, the style range is refreshing. The programme gained attention, and donations were made and raised to get a big-time artist to contribute. After extensive fundraising and more paintings, Chinese-born street artist, painter, digital artist and sculptor, DALeast, created my favourite piece of art in the city. The extinct Haast eagle on Stafford Street is fragmented, vicious and metallic. The combination of grey, blue and white lines creates a 3D effect that surprises you as you round the corner. DALeast loves his animals. He once said: “In my opinion, animals are like humans. We all live in the same environment; we have the same pressures, emotions and a feeling of insecurity in society. Animals are like society, but are kind of attached to humans.” DALeast’s work is natural and detailed, and goes beyond the use of simple stencils and tagging, with ladders and scissor ladders involved. His art is not political, but it does give a message of the fragility as well as the strength of nature when it comes in contact with a bustling industrial environment, the merging of two great powers.

Street art began with people’s love for protest and symbology. First, there were simple political pictures on the walls of Europe and America during World War II. Then, the beginning of solid documentation in the 1970s/80s, mainly, of course, in America, where economic and political issues signified the downfall of the American Dream. Through the rise of youth culture, angry and rebellious art forms were created — from punk rock to graffiti. The convergence of street art and graffiti emerged from housing projects, subway yards and bland suburban parking lots. It was fresh, hip and free for the public to consider and admire. Today we have badass figures like Banksy, Invader, Shepard Fairey and Stinkfish alongside aesthetic cats such as Be Free, Eduardo Kobra, Hyuro and DALeast. And despite this glorious mix, there is still controversy over street art. On my 75-minute walk from wall to wall, following the street art map, was the work of Fintan Magee called Chasing the Thin White Cloud. Spanning the side of the Scenic Hotel Southern Cross, this piece of work towers over everything. There is nothing quite like feeling insignificant under a piece like this. Just around the corner is the next best thing — she’s beautiful. Her name is When the Hunter Becomes the Hunted and Bezt, a Polish artist, created her. Like a Pre-Raphaelite woman, she lies back dramatically in a field of flowers with a fantail on her thumb. That pesky little fantail is the result of some minor controversy. Originally the woman held arrows that punctured her stomach, but it was deemed inappropriate by the DCC and Bezt was forced to paint over them, giving her a livelier companion. The council had received complaints — one claiming the image of someone dying was offensive to Ngāi Tahu. Apparently it was the first time the council had ever made an artist alter their art. I hope it is the last.

Glen Hazelton, a member of Dunedin Street Art, told me a bit about the hopes behind the commissioning process as well as his opinions on the matter. “It started when one of the members of the council was in contact with an artist, and a building owner wanted to host a piece of work. After that success, the idea grew.” By continuously contacting artists through social media, Hazelton and his colleagues managed to get a few artists interested in the city. As word of mouth spread between international artists, more arrived. “Sometimes we contacted them, then eventually, they contacted us.” When I asked why he thinks street art is so important here, he said: “There are a lot of people who won’t have the chance to travel overseas. This allows the people who can’t afford to travel to see amazing art in their city. Sure, you can go to the gallery. But many folks don’t feel comfortable in that kind of environment for a number of reasons: it’s not their vibe, a sense of snobbery perhaps, or they simply can’t be bothered. This is free and it legitimates a form of expression I think is important for young people who don’t get to exhibit in galleries. By seeing these images being commissioned by big buildings and businesses, suddenly a career in the arts becomes a valid way to make a living!”

Hazelton has a point. The world needs artists, but most people get put off at an early age, what with the same old, same old discouraging talk about “real careers”. This follows you from high school to university, and it takes a lot of ambition for an artist to overcome it.

Hazelton explained that there’s a barely a difference between street art and graffiti. “Street art comes from a place obviously slightly illegal. People are always gonna have an uncomfortable response to it. It’s a spectrum, with tagging at one end, seeking to be illegal, commissioned art at the other end, and graffiti operating in a legal/semi-legal status in the middle. Many people I know claim it can’t be art if it wasn’t put up legally. But I disagree … I mean, I hate giving this example because it’s the first name everyone goes to when they hear the words street art, but … what about Banksy?”

The work on our walls is sparking more creative expression and engaging the Dunedin public. “We are consciously targeting places that are out of the way for people today, like car parks and demolished buildings. These areas used to be busy. They were once the hub of the city and things change, but there is still something special there.”

I talked to him about the issue residents have of art on their buildings “devaluing” the property and wondered if he believed this was true. He said firmly: “No. Absolutely not. Most of the time it leads to more people around paying more attention to the way their building is looked after. Street art makes common things special all of a sudden, and this normally draws together a sense of community.” Referring to Rattray Street, he said: “The art improved the look of the area and people called for more! I’ve been told it also helps businesses.”

Looking towards the future of street art in Dunedin, he says “Hopefully we’ve opened a door that’ll make people get up and do something themselves. Maybe building owners can go out and find their own artists.”

David McLeod, contemporary jeweller and joint owner of Quadrant Gallery, has been trying to create a city map that lists all the art galleries and modern culture hot spots so tourists can know where to go to get a good taste of what Dunedin has to offer. He loves the street art and has many photos of old art that was painted over back in the day.

“It’s important to leave the good stuff. Getting artists to come down and paint on the streets sets a standard for local artists that goes beyond vandalism and just writing your name. This will hopefully initiate more pieces that are not commissioned but still have enough variation to be valuable. I’m hoping the work the DCC is doing with street art will make kids lift their game.”.