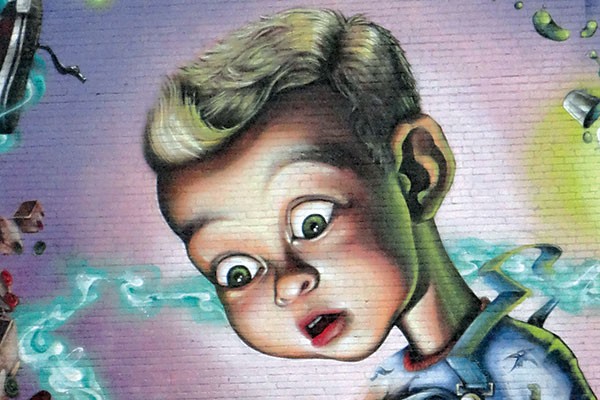 An Interview with Fluke

Fluke is a veteran Montreal graffiti artist who set up the graffiti company, A’Shop, in Montreal, Canada, in 2009. A’Shop supports artists in Montreal, setting the professional standard for artists and clients alike. OUSA has recently flown him to Dunedin and is commissioning him, along with a fellow artist, to work on a mural on campus, set to begin this week.

Critic talked to Fluke from his two-storey office space at A’Shop to gain an insight into his street background and the inspiration behind creating a graffiti company.

When you started out doing graffiti, what was your agenda? Or was graffiti just an activity for you?

No, I definitely wasn’t doing it as a form of activity. It’s a high risk to take — you can go to jail or potentially hurt yourself, or fall off a high building. As a teenager I think I was in search of my own identity, like most teenagers are. I think graffiti was a way for me to have that second identity. Nobody knows me by my real name — everybody calls me Fluke. It’s who I became at night after school. I became someone else — a superhero, I guess you could say, or a supervillain depending on what side you play on. I didn’t have to ask permission, I didn’t have to be rich. All I needed was a can of black and that’s it, you know? You can do what you want with your city, right? Whether it’s to express something or create an identity for yourself, it’s a huge amount of power.

Most importantly, I had an issue with how society was portraying me. We’re completely bombarded with publicity, billboards, advertisements. When I was a child, I was told that the reason why certain people had their faces on giant billboards is because they were important people. As a kid, I quickly realised if I wanted to be somebody, I had to have my face and my name on a big giant billboard. Well, I made my own billboard. I didn’t have the money, I wasn’t a superstar celebrity, but I definitely could climb a building and write my name on it. So I became important within my community. I created my own space, my own dialogue. Fluke was my nickname. It was my brand.

So now you’re known as a veteran of the Montreal graffiti scene.

I’m definitely not one of the old timers, but I’ve contributed. Fluke was born at the age of nine, so I’ve definitely been involved in the scene for quite some time now. Now, with A’Shop, we’re supporting the next generation.

How do artists afford such a great space like A’Shop?

I pay for it. Ah, I’m actually Batman. But, no. About six years ago, I had already started as an artist in the neighbourhood. I was already getting work and hiring other graffiti artists who I had known for years to help me out with these projects. What I found out was there was a lot of talent across the country and across the province. Artists were doing great work, but they had no capability in representing themselves or often they would get straight up mistreated by clients and suckered into doing commissioned work for free. Because I was already representing myself as an artist, I took a few other artists under my wing and started sharing the knowledge that I had and the space that I had.

Every time someone hires our guys from A’Shop, a small percentage of the money they earn goes to financing this space. Essentially, instead of an artist having to pay for an agent or having to pay monthly fees for a studio space, I try to absorb that cost for A’Shop’s artists and try to find them work — so I act as a booking agent.

What drives you into being so giving?

This is what I would have wanted when I started doing this. I was raised in a big family, and I started doing graffiti when I was very young. The street culture wrapped around the graffiti culture is very crew oriented, it’s very family oriented — I was raised with this mentality. There was a lack of organisation within our community. The culture was slowing dying in certain areas on the more commercial side of things. I decided to, not only for other artists but also for myself, try and standardise things.

The other problem we had and the reason for A’Shop was that there was no reference in this city. If you wanted to find a graffiti artist or a muralist, you couldn’t really pick up the phonebook and find one. By having a website and having this reference point, people quickly turned to us for these kinds of things.

Would you say that although graffiti is an art form, it’s pretty separated from the art world?

I think graffiti is something new; it’s only been around, if I’m not mistaken, since the 60s. So it’s something fairly new on the timeline of art in general and it’s becoming more and more mainstream and socially accepted and eventually will probably die down and be replaced by something else. I think graffiti artists would like to separate graffiti from the art world, but at the end of the day it’s all blended in together.

The one thing that’s really important to understand is that graffiti art or street art or whatever it’s called today, is not the same thing as graffiti. Graffiti in its purest form is vandalism. And it should remain that way. Graffiti itself is not made to look pretty necessarily. It’s an action. Whether you look at graffiti artists writing political messages or writing simply their name on a wall, what they’re doing is creating a statement. Regardless of what the end product looks like, it’s the action of doing the graffiti that is the art work and not necessarily the visual that’s left behind. As for street art and graffiti art, it’s very visually oriented. What the general public call graffiti art is not really graffiti anymore. At the end of the day it’s closer to art than to graffiti because most of it is done in a legal setting anyway.

Does anyone who has known you in the past think that you’re a sell out?

It’s a touchy subject. I’m sure some people might think that. Had I started doing this form of artwork without my background, I think they would. But I’ve paid my dues and now I give back to the community in a certain way. I’m very involved with different graffiti communities. My aesthetic has always remained the same too regardless of whether I’m getting paid now to do it or not. No one has anything against making money. What the graffiti community is afraid of is people not coming from this background or knowing the culture and the roots behind this art form and now creating murals and doing these giant things called street art when they’re not.

People are trying to protect their culture, you know? To me, painting murals is a sacred thing. You should have permission, not by the building owner but by the community, because as a public artist you have a social responsibility. Whether you chose to paint something provocative or something illegally or something that’s relevant to the community, I feel you have a responsibility behind that. At the end of the day, if the community doesn’t accept it, then they’re just going to paint right over it.