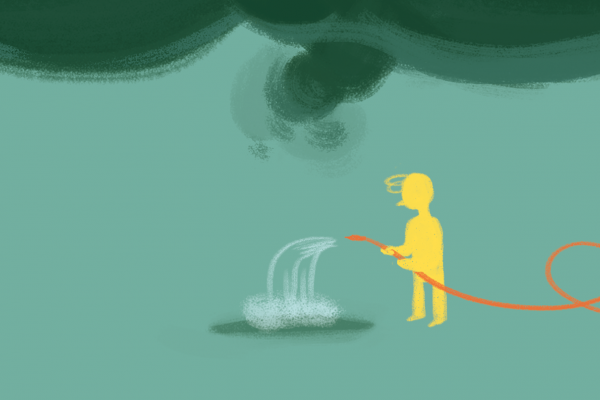 What On Earth Is Divestment?

Molly Reynolds is a member of the Otago Uni Divests campus group. On 14 July 2015, the group will be putting forward a petition to the University Council demanding that Otago stops investing funds in fossil fuels. Read on to find out more about why this is so important.

Climate change is one of those issues that rubs everyone up in different ways. Some get fired up over even the smell of it — they stop eating anything that could be related to ruminants, tie themselves to a tree and try to get everyone else to do the same. Others really couldn’t give a shit. They put all the climate change chat down to “greenie talk” that won’t amount to anything. Gov. Rick Scott (45th Governor of Florida) is one of these greenie haters. His state, Florida, is one of the most threatened by climate change, with the low-lying plains of Miami no longer needing rain to flood. Governor Scott has a simple solution that should fix anyone’s worries about the little issue in the atmosphere that could be causing this — in March he banned any mention of the words “climate change” or “global warming” in his departments. Scott even went so far as to remove the term “climate change” in a recent study on climate change.

What Scott, and many others, fail to realise is that 97 percent of climate scientists are telling us climate change is happening. And those who are wondering what the other three percent of scientists are up to? For those three percent, failing to publish their results on climate change can be very lucrative, with one such scientist recently being paid a tidy $1.2 million by coal and oil companies to keep his results to himself. The 2014 movie, Merchants of Doubt, reveals that the same people who were paid to hide the truth about tobacco are being paid to do the same for climate change. That is, some sneaky marketers who fooled us into thinking ciggies were healthy are also creating uncertainty about climate change. Not particularly reassuring, is it? When issues as big as this arise, it’s all too easy to crawl back into that comfy cave of ignorance and see yourself as a drop in the ocean of shit that is climate change.

Divestment is the opposite of investment. You get rid of stocks, shares, assets or investments because they are supporting something dodgy. This puts economic pressure on the companies involved and, more importantly, creates stigma about what they are doing and highlights opposition to that industry’s moral ambiguity. It is not a new idea and has propelled some serious social change, such as the opposition to apartheid in South Africa in the 1970s to 80s. Select colleges, state governments, counties and cities pulled their money from multinational corporations that did business with South Africa to show their outrage at human rights violations. The apartheid divestment movement significantly increased public awareness of apartheid and, in the end, was crucial to its collapse.

More recently, the use of moral investment has infiltrated the tobacco, alcohol and armaments industries. Corporations are deciding they no longer want to fund companies that contribute to catastrophic health problems for the majority of long-term users. In the case of fossil fuel divestment, it is equally simple. Bill McKibbin, a key player in this movement, sums it up beautifully: “If it’s wrong to wreck the climate, then it’s wrong to profit from the wreckage.” In 1989, McKibbin wrote a book about what would happen to the world if we didn’t pull finger and start making changes. Unfortunately, no one read that book and those who did were not yet switched on enough to take much notice. Big dog Bill changed tack and looked at other ways he could make a change — and so came about the glorious birth of fossil fuel divestment.

So far it has been the biggest divestment movement in human history; by September 2014, 181 institutions and 656 individuals had committed to divest over $50 billion, with numbers continuing to increase in 2015.

Climate change is a massive issue, and we are up against some of the largest companies on the planet. People who support divestment aren’t necessarily hippie tree huggers, but include people like Natalie Portman of the Harvard Alumni, Ban Ki-Moon, Secretary General of the United Nations, and Bishop Desmond Tutu, a social activist who fought against the apartheid regime. So some impressive names have given this divestment the thumbs up, but who isn’t supporting it? Well, unsurprisingly, it’s the pigheads running fossil fuel companies. For example, John Felmy, Chief Economist of the American Petroleum Institute, said that the movement “truly disgusts me” because the people supporting it are “liars”. Exxon Mobil stated that the divestment movement equates to “not using energy at all” — suggesting that their company is located under a rock. They totally dismissed renewable energy, not only denying its current use but also that we have or will soon have sufficient renewable energy technologies to provide for all our energy use. Wankers.

There should no longer be a debate over whether or not climate change is happening. It’s like trying to debate whether 1+1 = 2. The heatwave in India, droughts in California, floods in Texas and the increasing frequency of freak storms in the tropics are all symptoms of a disease that we’ve managed to turn a blind eye to for the past 30+ years. And in our own backyard the increasing frequency and severity of droughts is putting serious pressure on our agricultural industry.

So how would divestment from fossil fuels save us and the polar bears? All it takes is a bit of simple maths. In order to stay below a two degrees Celsius rise in global temperature (recommended by scientists to save us all), we would be allowed to emit 565 gigatons of carbon dioxide. Not any more or we’ll drown with the polar bears. But fossil fuel companies already have enough fossil fuels in reserve to put out 2795 gigatons of carbon dioxide — and they are itching to burn it. That is a whopping five times what is safe to release into our precious atmosphere. Even more messed up, the fossil fuel companies are still exploring. Divestment brings this issue into the public eye. Our funds can instead go towards renewable sources of energy.

Not all is lost though, with positive results at the recent G7 summit in Bonn, Germany. World leaders agreed (with peer pressure from influentials like Ban-Ki Moon and Pope Francis) to commit their countries to limit global temperature warming to two degrees Celsius and reduce carbon emissions by 40 to 70 percent by 2050. They also emphasised the need to decarbonise the economy completely by the end of this century. This is a huge deal as we’re just around the corner from the UN Climate Change Conference in December, at which (if we’re lucky) the UN countries will hold themselves accountable for the legally binding reduction targets for carbon emissions they set. But it’s hard to mobilise international movements for a long-term commitment, especially with the scale of things. Consider this, get a group of your five besties and try to decide what to have for dinner, or what movie to watch. Hard, yes? Now try getting 100 high-powered strangers to come up with a plan to change the world in an efficient, green and ethical way.

Some major players have already divested their shares from fossil fuels: AXA Insurance, the Royal Australasian College of Physicians, Costa Rica and Norway, Stanford University, Glasgow University, our sister city University of Edinburgh, along with dozens of other universities, and recently the state of Hawaii, which signed a bill to go 100 percent renewable by 2045. You know who else? The Guardian has divested £800 million from fossil fuels and, surprisingly, the oil tycoons of yesteryear’s Rockefellers have given the movement a big boost with their symbolic (and substantial) US$50 billion divestment from the fossil fuel industry. Various colleges, universities, cities, and religious institutions around the world have also seen the light and made the move to divest. More locally, Victoria University of Wellington and our own Dunedin City Council have divested their shares from fossil fuels.

So why doesn’t the University of Otago follow the DCC and Vic’s lead? Surely we don’t want to miss the boat and divest after Auckland Uni? No doubt, it’s something that improves our reputation and supports a more sustainable future for our student body/human race. It’s not just students who are concerned about this. Many of our lecturers are heavily involved — yes, they do have lives beyond the lecture theatre. Of the nearly 800 people who have signed the Otago Uni Divests petition, 70 are staff.

Dr Alexandra Macmillan, Senior Lecturer in Environmental Health, is one of these people and has been heavily involved in mobilising the DCC and the University Council towards divestment. Macmillan studied medicine at the University of Auckland and went on to specialise in public health. While in Dunedin, Macmillan has been part of a group of staff at the university who are concerned about climate change. 25 members of the group are departmental heads and pro-vice chancellors — high-level signatories who have been encouraging the university to divest.

As well as staff, the Tertiary Education Union is on board. Since June last year, the group has written three letters directly to the vice-chancellor and the University Council urging “(the University of Otago) to adopt unequivocal language that commits the Foundation to cease current investments in companies that extract and sell fossil fuels, as well as avoiding future investment in such companies”. The letters emphasise that divestment is an “exciting opportunity to enhance the national and international reputation of the University of Otago”. The TEU is also urging the university’s investment portfolio to exclude anything that has an overall negative impact on social and community outcomes, is inconsistent with the UN’s policies on health and safety, children’s rights or human rights, is expected to result in serious harm to life-sustaining ecosystems, or is illegal in New Zealand. It seems surprising that these issues even need to be raised in the twenty-first century. These criteria would ensure that the university’s investments are ethical. Macmillan knows that this issue “goes much wider than just the 25 signatories” and that now, and in the past, “universities have led the way in making divestment choices which has meant that the rest of society then follows”. Macmillan, like many others, believes that divestment “is probably the most powerful action that students can take as individuals about climate change right now”. We know that the university actually only has a minuscule amount of investments in fossil fuels so divesting would not result in any huge financial loss; what it would do is publicly acknowledge the university’s duty to invest its money in ways that reflect its values and look after our future.

On 14 July 2015, the University Council meets, and this should be when it discusses divestment. Otago Uni Divests is the student-run group whose petition will feature at that meeting. One way to keep up on what’s happening is to give OtagoUniDivests Facebook page a like. We will keep you posted on the latest as this movement gains some serious momentum. We are not the only group of students backing divestment. Both Auckland and Canterbury University students are making noise. Victoria Uni has already beaten us to the punch — how could we let Auckland and Canterbury sneak in before us as well?

Sign our petition to ensure your voice is heard: http://bit.ly/ 1T81jrj

Tags:   what on earth is divestment features