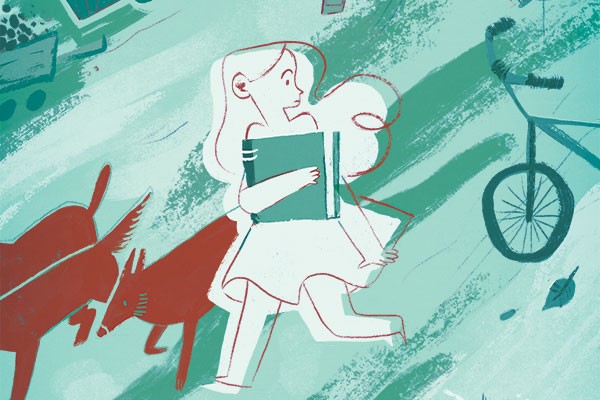 Loulou takes us through her experience of living in Beijing on a university exchange, highlighting the cultural differences she experienced and the surreal nature of living somewhere utterly unfamiliar.

Colin rolled his shirt sleeve up to reveal a barb-wired swastika with “Sons of Badness” tattooed into his skin. He grinned, like a child with a new toy, as he studied his arm. He didn’t know what that tattoo’s World War Two implications were, but, for Colin, this swastika was an appropriated symbol from the West (despite its Eastern origins), so it had to be cool. As he began to show us his other tattoos, two toxic green cocktails were placed on the table in front of us. The waiter winked at us, then handed a beer to Colin. Colin fanned out a wad of 100 yuan notes on the table then handed one to the waiter. He lit another cigarette and continued to describe important lessons of love he had learned through How I Met Your Mother.

Colin repeatedly informed us of the television show’s genius. One night, for example, there was a great-looking woman sitting at a bar. Everyone had tried to hit on her, but each had failed. After a drink or two, Colin flexed his fingers, went up to the woman and informed her that she was cute but he didn’t like her hair. The compliment-insult combination wooed her (apparently). Although she was the girlfriend of a gangster who sat leering at them from across the room, she was into him.

Colin suddenly stopped talking and pulled out his cellphone to show us photos of his pet turtle at every angle (here’s one of its leg, here’s its mouth, here it is front on). The turtle’s eyes bulged, illuminated by the phone’s flash. We nodded along, half lost on his broken English. The only time he stopped talking was when he went to the toilet. My friend and I looked at each other, wondering why we were doing this again. We devised a plan to politely thank him for the drinks (untouched after an initial and reluctant sip) and leave. I never saw Colin again, but for months after he sent me messages on WeChat asking me what I was up to and whether I liked Katy Perry’s “Dark Horse”. I didn’t have the heart to either reply to him or delete him.

Bizarre — the whole thing was. Every day in China’s capital, I experienced things that induced breathless, bewildered laughter in me, or deeply confused silence. My reactions or experiences weren’t particularly unique when compared to those of other foreigners living in Beijing (white-girl/boy-in-China blogs have become a cliché), but — as another exchange student observed over a goodbye meal — those who have lived in China become part of an unspoken cult. They are bonded by their experiences of the unexplained and the bizarre. Within this cult is a further divide: the people who become addicted to life in China and the people who never want to return.

The acceptance of contradictions in daily life by Beijingers is both admirable and nearly impossible to comprehend. But to have a life within this giant ball of tightly interwoven complications, it is inevitable that its people embrace or ignore these complications if they want to keep on surviving. China has achieved the world’s firsts over and over (the compass, paper, printing, gunpowder), sometimes hundreds of years before the Western world stumbled across these innovations. And yet fear of Beijing’s tumultuous, not-so-distant past (including the Great Chinese Famine from 1958 to 1961 as a result of Mao’s Great Leap Forward, the Tiananmen Square protests of 1976 and so on) means open political debate or “alternative” opinions are still subject to censorship. Even while I was there, the 2014 protests in Hong Kong, often referred to as the Umbrella Revolution, meant Instagram was blocked in China with no warning. Beijing’s desire for progress also dramatically changes the cityscape every day. And, in all the spaces in between, there are people — everywhere, doing absolutely everything. This context, paired with exposure to a sprawling population, means there is a statistical certainty of encountering the weird...daily.

While on exchange in China, I attended Tsinghua University. Along with Peking University, Tsinghua is the top university in China. Its international connections only strengthen its status — Apple’s CEO, Tim Cook, Facebook’s Mark Zuckerberg (strangely enough, considering Facebook is blocked throughout China) and former Wal-mart CEO, H. Lee Scott, are all on the advisory board of Tsinghua’s School of Economics and Management. In practically all respects (apart from the technicality of being a foreigner), I did not deserve to be there. Tsinghua and Peking together take approximately 84 students out of every 10,000 in Beijing who sit the gao kao (basically an incredibly stressful university entrance exam) each year. In places where there is a (controversially) smaller quota, only about three out of every 10,000 are accepted each year. Wrapping my head around these figures and the impossible study students had committed to their entire lives to attend Tsinghua lurched me into a pre-quarter-life existential crisis. Were all my achievements mere ploys? Had I ever tried hard at anything?

Dispersed among Tsinghua’s students — who were already god-like in my eyes — were those that even the Chinese students deemed mythical. Hopelessly inadequate, I almost didn’t want to know. But conversations over hot-pot dinners with friends crammed into our dormitory floor’s kitchen often ventured into these topics. There were the sons and daughters of high-ranking government officials who kept their identities hidden and were evasive when it came to making friends. There were the known, frequently discussed gao fu shuai (tall, rich and handsome) boys and the bai fu mei (white, rich and beautiful) girls. And there were the celebrities, including the “Milk Tea Girl” — a girl who became famous in China for her “purity” and “sweetness” after a photo of her as a school girl drinking milk tea was put online. On a campus where most undergraduates and postgraduates lived, often in cramped living quarters by New Zealand standards, there was a sense of community and, along with that, a culture of constant story telling.

But, despite Tsinghua’s prestige as an institution filled with impressive individuals, it was not without its oddities. Several nights when returning late to Tsinghua’s campus, I biked past an eclectic pack of stray or abandoned dogs roaming the street. They were determined and in pack formation, so they ignored me and continued on down the road. I never saw the pack again. Another time, around midnight, I had forgotten where I had left my bike. I was briskly undertaking the thirty minute walk from the North East Gate to my dormitory. Again, campus was deserted, but as I turned a corner, out of nowhere, a group of students erratically skated by. They seemed to have been teaching themselves to rollerblade on a long, barely lit road that intersected several large lecture buildings. On a different day, I went to collect my bike and became distracted when a large nut hit me squarely on the head. I looked up. Perched high up in the trees that lined the bike stands were the tiny old ladies who cleaned our dormitory. The strange encounters on campus reached a sickly turn when one morning, as students from my building headed down the small driveway to the intersecting campus street, each swerved to avoid a large puddle of blood, yet to be cleaned up. I momentarily observed the sad, solitary tissue drowned in the middle.

I knew there would be no explanation, no notice of what had happened, no email out to all the students. By then, China had started to affect the way I thought about and interacted with life. I was one in an expanding city of about 21.5 million people. Actually I wasn’t “one”; I was no one. Apart from being the subject of constant stares as a foreigner, I was still nobody among a huge, constantly moving crowd. Not only did that mean making fast decisions and constantly moving forward, it also meant that when I was out and about, I was out for myself. Fondling on the subway, or getting off the train at peak times, were the small, troubling interactions that I always worried about. Authority or even a kind stranger to help you were rarities, not givens. It was exhilarating.

It is a mess of terror and thrill when you sit in the back of a taxi (seatbelts, of course, ripped out) racing and swerving through traffic, anticipating a night roaming from bar to music venue in the fast-disappearing hu tong (traditional, alleyway neighbourhoods) of Beijing. The taxi would pierce through the heavy veil of air pollution that, on several days while I lived there, was 25 times what the World Health Organisation gauges as an amount that compromises health. The taxi would sharply change lanes to avoid a bus, and the driver would laugh at our reactions and decide that was the time to strike up a conversation. The lights of the huge Bird’s Nest (built for the Beijing Olympics in 2008) would glow then disappear. These lights would soon be replaced by the illuminated swirl that tops the luxury Pangu Plaza hotel. Every space was filled with endless blocks of buildings adorned with red Chinese characters.

One of my good friends in China was an Australian punk who became increasingly connected to the underground punk scene while we were there. This was partly because of his own relentless passion and partly because his Chinese girlfriend was an underground music veteran. His girlfriend, who had the chemical structure for acid tattooed into her arm and partied daily, insisted that we attend the Beijing Drunk Fest — an all-day punk festival in a tiny, DIY venue called DMC, four subway changes away from campus. After several hours inside DMC, drinking cheap Tsingtao beer and avoiding the flailing limbs of young moshers, I went outside to take a breather. Punk kids filled the seats around the table and my friends and I began to talk with them about their lives in Beijing. They were angry, they were talented and they fantasised about finding freedom outside China. The word “freedom” dripped from their lips; it sounded divine — I also wondered what it tasted like. For a few long minutes, we lingered in the fantasy of the worlds each other represented.