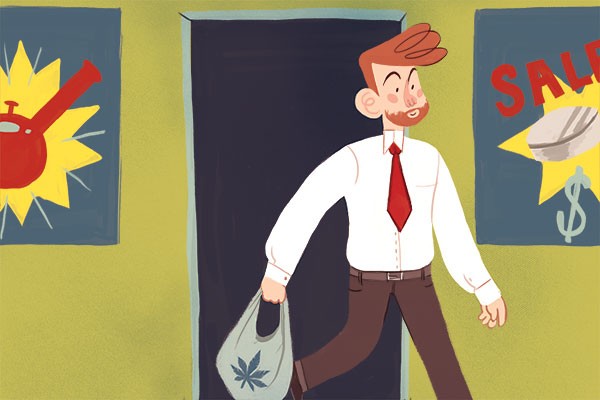 Weed, marijuana, Mary J, bud, green, pot, herbs, grass, “stuff”, “ingredients for a chill night”— whatever it is you decide to call it, it goes with Scarfies like chlamydia goes with Hamilton. Contrary to the mandatory “drugs are bad, mmkay” talks, injecting two whole marijuanas doesn’t make you a member of Al Qaeda, or lead you to do harder drugs. Yet the legality of marijuana remains a point of contention among policy makers.

Despite marijuana being illegal in most countries, there are tokers and smokers in all far reaches of the globe. In a lot of ways, weed is the Scrumpy of edgy: not bad enough to really mess you up or land you in trouble (Scrumpy hands being the equivalent of a buckie), but always a good time.

Here in Dunedin, you can walk into just about any trap-blasting flat and expect to see bongs in all shapes and sizes, drought be damned. The stoner culture is big enough here that on 20 April at 4:20 in the morning you’ll have found groups of stoners making their pilgrimage up Baldwin Street to start the day with a wake ’n’ bake. Despite marijuana being illegal, police and Campus Watch tend to view tokers with a benign indifference, so long as you do it in your own flat. Stoners are easier to manage than drunks: fewer broken bottles and less vomit, more hackey sacks and empty chip packets.

The real point of concern for law enforcement isn’t necessarily use of the drug itself but its distribution. Growing and selling weed contributes to the black market used by gangs to fund themselves. When an ounce goes for $300-350 in Dunedin, with each plant yielding around 1.5–2 ounces, that’s a fair chunk of change slipping past the IRD’s net. Especially when you consider that, much like diamonds, it is an artificial price created by controlled scarcity and demand (albeit with less child slavery and fewer marketing campaigns), what with all the middlemen needed to distribute it and evade the police.

Now, the sensible solution, as any BCom major will tell you, is to legalise purely on the basis of macro-economics. If someone is willing to wait 2–3 hours for a dealer to maybe message them back so they can shell out 25 for a tinny, then you know it’s not an issue of product. Hell, for a 50 you’d be prepared to go to South D. You just need to undercut your competition.

If the black market were reduced because marijuana is legalised, then organised crime could potentially be crippled. Add in the quality control and regulation that substances such as alcohol and tobacco undergo and you give people more incentive to buy from a dispensary because they know they’re getting a better product than off the street. This generates tax revenue, which the government can then spend spying on its citizens and letting school children go hungry.

Critics will cut off any talk of legalising marijuana by claiming it to be “damaging and addictive” or by stating the gateway drug theory, which assumes smoking a joint will lead to harder drugs. Marijuana doesn’t have any physiologically addictive components. Unlike tobacco, where everyone knows at least one person who constantly claims to be “quitting” and yet three-standards deep is already trying to bum a cig off someone, you can only ever become psychologically addicted. That’s pretty feeble grounds for making something illegal, considering you can become psychologically addicted to anything from Candy Crush to Reddit. Marijuana has some useful medical applications. For instance, patients undergoing chemotherapy use marijuana to suppress the nausea that comes with treatment and find it stimulates their appetite.

As for the gateway theory, studies of US forces in Vietnam by Dr Lee Robins found no correlation between the use of “soft” drugs (marijuana, alcohol, tobacco) and the transition toward “hard” drugs (heroin and opium) as soldiers who drank heavily did not touch heroin, while soldiers who used heroin didn’t drink. In fact, it concluded around 45 percent of soldiers had tried heroin at least once during their time in Vietnam, with casualties from drug use (overdose, friendly-fire incidents as a result of soldiers tripping balls, etc.) being three times higher than combat casualties. These results ran contrary to supposedly impartial studies conducted in the States at the time as marijuana was just as readily available as heroin and yet most soldiers went straight for heroin without touching marijuana.

That said, there are some partially valid claims to the gateway theory. However, it can sometimes become a self-fulfilling prophecy due to a lack of proper drug education. If you’re told as a kid that all drugs are bad, that they will ruin your life and then you try a joint for the first time at a house party and don’t feel compelled to destroy the place, you might start to think you were lied to about other drugs as well. It becomes difficult to sort the propaganda from verifiable fact, especially with the “edgy” taboo element of doing something illegal. The gateway theory in some circumstances can be true as a result of this misinformation.

Psychologists argue that the gateway theory is fundamentally flawed because the majority of cases tend to have a history of high risk behaviour. If you’re the kind of loose unit who likes to be twenty-standards deep on a Thursday night, railing eckies may be no less taboo than having a blaze. There isn’t a causal link between the two because some people have a tendency toward risky behaviour are just as likely to experiment with drugs independent of which one they did first. Often the gateway theory can be explained by the fact that it’s far easier to know someone who deals marijuana than someone who deals harder stuff, and that dealer in return is more likely to know where to acquire harder stuff. No one wakes up in the morning , smoking a cone and then saying to themselves: “Hey, I feel like doing some heroin.”

In fact, the modern War on Drugs started from Nixon’s concerns about the debilitating rate of heroin addiction among US servicemen in Vietnam, which ranged from 10 to 15 percent of all US personnel. Nixon went so far as to declare drugs to be public enemy number one because of how many veterans came back all Trainspotty. Now, the War on Drugs has some good intentions but some very messy results. Four decades of constant warfare by the Drug Enforcement Administration (DEA) against drug cartels in South America have produced very little except a lot of weapons, a lot of unnecessary arrests and some mediocre smack.

In a 2008 study, Harvard economist, Jeffrey A. Miron, even went so far as to say that the amount of money taxpayers would save from incarceration costs and use of federal law enforcement was $41.3 billion. To put this in context, New Zealand’s total student debt at the time was estimated to be $10 billion. The $41.3 billion also doesn’t include the socio-economic impact of creating a cycle of poverty among those who are incarcerated on petty drug crimes. Felons are unable to vote and have few job opportunities, forcing them to resort back to crime or live in a state of permanent poverty working minimum wage.

There are also elements of self-interest in the US government’s decision to pursue a War on Drugs as lobbyists in support of the war come from private prisons and arms manufacturers — the so called Military-Industrial-Complex that dominates policy-making. This makes sense when you consider that the price of all drugs depends on free-market principles of supply and demand, making the War on Drugs fundamentally flawed. Any successful raid or drug operation simply causes the price to go up by reducing the supply. This increases the incentive for growers to cultivate to cash in during these periods of low supply/high demand.

Because of how ineffective the War on Drugs is at actually stopping drug usage, the State of Colorado in 2012 became the first state to legalise marijuana for recreational and medical use. Those lucky enough to live in Colorado have been allowed to own and grow up to six plants, as well as buy marijuana and marijuana accessories from dispensaries, since 1 January 2014. Despite the opinions of naysayers, Colorado actually experienced a drop in crime rates, a decrease in drug use compared to the rest of the States, and became the only state to show positive economic growth during the recession. A study conducted by the Drug Policy Alliance in January 2015 showed that Colorado had generated $40 million of tax revenue as a direct result of legalising marijuana, with this money now being spent on improving public schooling and funding drug prevention programmes for youth. Following the legalisation of marijuana, Colorado is experiencing its lowest unemployment rate in years as new jobs spring up from drug tourism. Marijuana is becoming one of the fastest-growing industries in the state. By tapping into the untaxed income of the criminal black market, Colorado is able to turn the social problem of drug use into a source of income and livelihood for ordinary people instead of continuing a cycle of fear-mongering propaganda and incarceration.

Colorado has quickly become a flagship for the legalisation of marijuana; Washington DC and Oregon followed in 2015, and more and more states are looking to legalise or decriminalise. Public opinion is also changing, especially since marijuana is no longer the “edgy” illegal drug it used to be — youth tokers are on the decline while more and more adults decide to roll up some grass. While New Zealand still classifies marijuana as an illegal drug, conclusive results from the States can create enough momentum for grassroots movements to lobby against the government to change its mind and start working toward a better solution than the flawed one we’re using now.