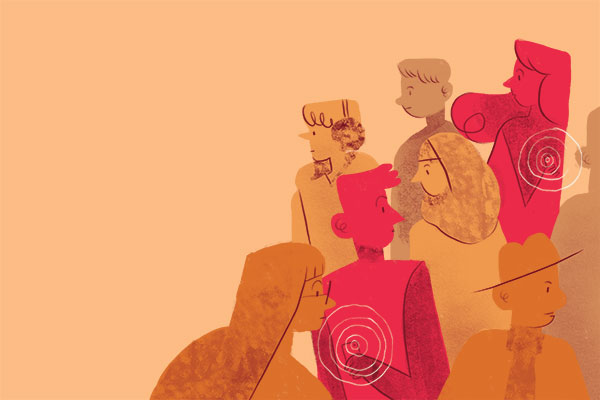 Call me old-fashioned, but becoming “Facebook Official” (FO) has never really appealed to me. I dated a guy who was adamant he would never stay with a girl who wouldn’t make the relationship FO. Let’s just say, whatever spark we had fizzled out very quickly. I just don’t understand how people enjoy broadcasting their relationship to the rest of the world, but, hey, each to their own.

With the new-age arrival and steady infiltration of social media, it’s likely I am one of the few in my generation who still believes in a real Disney love affair. My inner child has a beautifully romanticised idea of what relationships should be, and that is that they transcend the falsities of social media. Unfortunately, the sad truth is that my dream of being a live-action Cinderella is slowly fading into the mist of the past, only to be replaced by my generation’s new reality: desperately publicised relationships and dodgy booty calls.
Cue the arrival of social media sites/apps such as Facebook, Tinder and Grindr, which have been changing the face of romance since 1997 (the year that sparked the production of Six Degrees, the first recognised social media site). Facebook, as the majority of us know, is all-encompassing. It slips its coded tendrils into our computers and holds us captive, without a care for the reality continuing on without us, just beyond the screen. It is a social media platform that allows us to keep up with the lives of friends (many of whom we don’t really care about) while sharing with those same “friends” a constant stream of the goings-on of our own lives. It has made stalking crushes far easier, and only slightly more acceptable.

These social media forums encourage us to reach out not only to our friends, but also to those whom we are afraid to confront in reality. The idea of rejection doesn’t seem quite so bad once face-to-face interaction has been removed from the equation. In recent years, new apps have been created in order to make dating even easier. Tinder users swipe right to like or left on an app to pass another person’s profile. Grindr is pretty similar in its construction, except for the fact that it is a site for gay, bi and curious men. These apps embrace a whole new level of speed dating, where everything is taken purely at face value. The real communicating (if you can call it that) happens only after potential profiles have passed inspection. Even then, the seemingly sole purpose of these apps is to create the cheesiest, sleaziest pick-up lines and hope that somehow they get you some bedtime action.

So there you have it: Facebook is a breeding ground for supposedly PG communication, whereas Tinder and Grindr promote something a little more MA16+. There can be no doubt that the arrival of these social media platforms has changed the way in which we view relationships. No longer are dating, phone calling, letter writing, or even face-to-face conversations a common thing. Okay, wait — let me rephrase that. While the aforementioned romantic acts may still be in circulation, social media has certainly had a hand in their gradual decline from the dating system. The slow development of emotional relationships are being replaced by sexual ones, and from where I’m sitting it looks like romance in my generation is dying.

Dr Rosemary Overell, cultural studies researcher and lecturer at the University of Otago, is interested in how social media works as a platform for creating relationships and believes that the increased use of such sites has made social lives much more flippant. She explains how the broadcasting of one’s relationship by making it FO is a cry for social approval and that this desperation for said approval is formalised and intensified through social media platforms such as Facebook. It is a classic case of overcompensating, where users are “attention seeking and want validation from other people that they are worthy.”

Overell says that she herself has experienced the psychological issues associated with the publicised breakdown of relationships on social media. Following the slandering she received, she decided to remove herself from Facebook entirely — a decision she now sees as liberating. Demonstrating a restraint that many of us lack, she deleted the app from her phone and has since discovered that it had been a colossal time-waster. Once swayed into downloading Tinder (but adamant that she never actually used it), Overell says she is reluctant to persue a new relationship via the internet. However, she acknowledges that today it is increasingly common for people to use dating sites such as Tinder and Grindr, and that this way of dating is becoming much more acceptable. In the early 2000s personal advertisements were seen as creepy and sad, but now, through social media, they are no longer something to be ashamed of.

Dating is supposedly made easier for millions of people all over the world through the use of Tinder, which compiles information from Facebook to link together compatible singles. It is heavily based on the notion that looks come first and encourages users to judge others by their appearance, ensuring that superficiality becomes acceptable. It is a common belief amongst many female users that the site is brimming with “creepy” guys only on the lookout for sex. Arguably, some women have the same idea. Sally, interviewed by Anna Moore of the Guardian, was a monogamist before her days with Tinder. Through the site, she says she “discovered what it could be to have sex then walk away without a backward glance. That was liberating.”

Grindr is very similar to Tinder in its composition, whereby curious, bi and gay men use the site to connect with others in their region. Grindr is also focused largely on appearances, and users can even choose the category from which to find the most attractive profiles (e.g. Bear, Twink, Jock, etc.). It uses GPS technology for users to easily find their closest potential hook-up. Although the app is advertised as a social platform for dating and making friends, it is more commonly used for casual sex.

According to Dr Dan Siegel of the UCLA School of Medicine, social media lacks seven important communicative exchanges (eye contact, facial expression, tone of voice, posture, gestures, timing and intensity) that are necessary to have a genuine conversation with someone. He is concerned that if we continue on this path of linear communication, we will develop a new generation who think and act only on a surface level. While Siegel is quick to dispel the idea that this is either right or wrong, he is profoundly aware that if social media does replace face-to-face interaction, our society will have a serious issue on its hands. As Jay Baer (social media and content strategist and speaker) so eloquently puts it, “social media forces upon us a feeling of intimacy and closeness that doesn’t actually exist.”

Of course, there are positives surrounding social media and dating. Hell, without it, I’d surely still be that little girl whose only interaction with boys was to yell at them because flirting (or even just having a conversation) seemed far too terrifying. There must be something to come out of it as in the last 10 years, a third of new marriages (at least in the US) started out with some form of online dating.

Tinder seems to be something of a recluse, where those in need of a pick-me-up go for a little self-esteem boost on those days when everything is just utter misery. Jamie Blynn, writer for Her Campus website, says that “the app is a complete and total ego booster with people liking you based almost entirely on your pictures.” It is also a space where bonding occurs, with friends working together to come up with the most beautifully cringe-worthy pick-up lines. It facilitates the blossoming of new friendships with those kids at high school that you never really talked to. Blynn writes, “surprisingly enough, there’s nothing awkward about it! It’s mostly just hilarious.” It is very much a place to overcome that niggly “dry spell” (obviously) and, in very rare yet wondrous cases, it spawns new relationships (but only after the one/two/three-night stand).

Grindr also has its pros. While some will argue it only encourages casual sex, it surely started out with the best intentions. It allows men to interact with other interested males in an arena free from judgment and bullying. It provides a sense of community for said males to express themselves and experiment with their sexuality. As with Tinder, it can create new friendships and, on occasion, lead to devoted relationships.

As Facebook is focused more on friendly relationships, it is the tamest of the three. Its ability to connect people from all over the world is an asset that its users certainly take advantage of. Remember that kid in high school who you never actually talked to but somehow ended up befriending on Facebook? She’s in Thailand now, working with kids in under-funded schools and getting white-girl wasted on her days off. The guy you hooked up with in Australia over New Years? He’s still surfing.

After eavesdropping on that cute guy’s conversation from your law class and surreptitiously discovering his name, finding out every detail of his life is now only a mouse click away. You can find out whether he is single (and start planning all the different ways you can “accidentally” bump into him) or whether he already has a significant other. Stalking other people, for whatever reasons you may have, is equally simple and requires little effort on your part. Facebook connects us not only with those we already know, but also with those who we don’t know and, especially, with those whom we want to know.

So is social media good or bad? Will it be the death of romance or will it help us conquer new frontiers of dating? Before social media, stumbling across Prince Charming in the midst of a deserted forest (or at least at the library) may have actually been a possibility. Today, however, we have the ability to actively search for love online, and so fate like this has become an overrated ideology of the past.

As much as I want my Disney-style happily ever after, I think that I am fresh out of fate. I must have slept in when God was handing it out, like how New Zealand slept in when He was giving out diamonds and oil, and we were left with Pineapple Lumps.
Life without a raucous love affair does look pretty bleak, and the way I’m going, the love life isn’t going anywhere right now. Perhaps it is time I joined the rest of my generation in the online dating game and downloaded Tinder. But I think I’ll use it as a stepping-stone to having a real conversation, instead of just a replacement to all relationships. Maybe I’ll get a date out of it after all. Maybe he’ll bring me Pineapple Lumps. Mmm Pineapple Lumps. #loveatfirstbite
This article first appeared in Issue 7, 2015.
Posted 2:51pm Sunday 12th April 2015 by Maya Dodd.