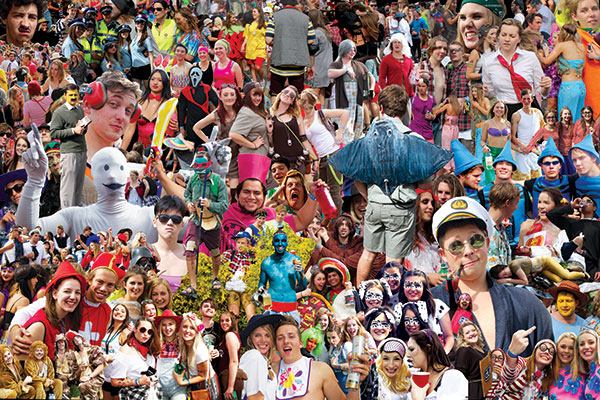 For those of you oblivious hipsters out there still living in the age of Myspace and Bebo, the Facebook page Humans of New York is an arts/humanity project where a photographer in New York — you guessed it — photographs humans in New York. The core message that this project shares with us is that all the coolest and quirkiest people live in NYC, and if you don’t live there, then you’re pretty much as basic as a yoga-pants-wearing white girl in a North American suburb.

The popularity of this page had us thinking about all the interesting lads and lasses around campus in possession of above-average chat. Where better to look for these quirky folk than on the street of Hyde?

Waking up to the dawn of my fourth and last Hyde Street, my challenge was simple. With five hours on the clock, I had to get a decent diverse selection of Hyde characters spilling their deep and darkest secrets.

This was my first interviewee of the day, whom I chanced upon when lining up at the portaloos. Natalia Kills stated that I was a “doppelganger who did not respect creative integrity or intellectual property.”

He is wiser than her though. “In life I think you just gotta do what makes you happy, and whatever makes you happy, be happy with that. Everyone will die eventually one day, so don’t give a fuck and live life to the full.” 10:30am: Two standards down and talking to a nun in boxer shorts.

What’s your life plan?
“Nah, no life plan — trying to see what happens at the moment of graduation, then maybe figure it out from there. I imagine a future with some sort of meaning doe — make sure it says ‘doe’.”

What are your thoughts on The Sound of Music?
“Hell, that movie changed my life. I travelled to Germany thinking I could find the hills Julie Andrews frolicked in. I had no luck, but I ended up finding the girl of my dreams so I guess it all worked out okay. Actually, fuck no — I got a broken heart...next question, okay?”

Why the nunnery?
“It’s all about the booty, baby.”

Any last comments?
“We are on earth to fart around … don’t let me tell you differently.”

Are you drunk right now?
“Don’t let anyone tell you differently.” Mermaid poncho dude had no idea what flat theme he was dressed for, or where exactly he was, but one thing he was sure of was that his favourite mermaid was the one combing her hair on the left because there was something magical in her eyes.

What’s the hardest thing you’ve ever done?
“I tried having sex when I was blacked out once and I just couldn’t do; it was so difficult. I just couldn’t get it up. It didn’t happen.”

And what was the easiest thing you’ve ever done?
“Having sex sober.” 11:00am: I am still not drunk enough for this shit. Luckily, however, they are.

Further down the street I happened upon a bunch of badminton players rocking out with their shuttlecocks out. When I approached them after admiring a few volleys, the very first thing they wanted to make clear was that they were definitely not tennis players. I assured them that the badminton racquets made it pretty apparent. They repeated that they were not tennis players.

(Warning: The following interview contains gratuitous use of shuttlecock chat.)

What’s your team motto for today?
“Players gonna play — we wear our hearts on our sleeves and our cocks on our chest.”

What made you guys want to dress up as the Black Cocks?
“Well, we were driving towards the Warehouse and we were, like, tennis players is an easy option; it’s just white, white, white, and then we were, like — you know what people don’t do, they don’t do badminton players.”

No, they do not; it’s a nerd sport.
“People don’t fully appreciate the merits of a good game of badminton, and I was in Malaysia for about 12 days, and I was, like, badminton is the shit, right? I was captain of the Malaysian badminton team.”

“Before he came back to New Zealand he was quite weak on his forearm, and since he went to Malaysia his forearm’s got a lot stronger.”

And what exercises do you do to strengthen your forearm?
(Somewhat impressive display of stretching ensues.)

“You’re laughing, but you don’t see our badminton results; it’s all about how hard you can hit the cock. It’s all in the wrist strength.” What matters most to you in life?
“Protecting the people of Gotham City.”

Do you feel like the people are worth saving?
“After everything I’ve seen on Hyde Street, I don’t know.”

Thoughts on the Joker?
“Yeah, I’d tap that.” 11:27am: The house music is starting to sound great. Either the DJ has changed or I’m getting into the zone.

How many people are in your flat right now?
“None because we only just managed to lock it up.”

How did you get everyone out?
“Abuse, really. It wasn’t so bad because it was only our friends, but, like, a lot of verbal abuse.” 12:20pm: I wonder if these girls will let me play a giant game of beer pong with them...

“Most people are calling us trash cans — we’re beer pong! Who the hell buys red trash cans? Like, come on, who are you?”

What advice would you give to yourself 10 hours ago?
“Maybe just don’t start on the spirits.”

And what advice would you give to yourself 10 years ago?
“Well 10 years ago I was anti-drinking, like, don’t ever drink — you know what it does to people. But now I’m, like, you know what? You only live once, so just do what you wanna do.” 12:52pm: Halfway through the bottle and I’ve lost the ability to stand.

What’s your biggest fear in life?
“Being homeless and having no money.”

What about you?
“No fear, purely YOLO.” “I really don’t want to fail out of university … my parents would be so upset.”

“Really? I’m just afraid of being alone, never finding anyone to be with — just living by myself with cats.” What made you decide to start making meth?
“We needed some extra cash to afford tuition and alcohol.”

Do you think it’s wise to be trying to sell meth on the street today with such a large police presence around?
“Oh definitely! No risk, no gain — would do it all over again. The police were too occupied looking after all the people pissing outside; plus they weren’t really intimidating enough to scare us off.”

Do you have any advice for people trying to break into the meth industry at Otago?
“Leave it alone, it’s our territory. Don’t fuck with us ’cause you will come off second best. If anyone tries anything, we will get our main man Saul on to you.”

Any words for the kids?
“You can catch us at the Dundas dairy every evening at four; have cash or don’t bother showing up, bitches.” 1:22pm: Two thirds through a bottle. No longer thinking of hard-hitting questions.

When did you first know that you wanted to be a taco?
“About a week and a half ago.”

What’s your biggest fear in life?
“Needles … I don’t wanna taco ’bout it.” 1:31pm: Reunited with the girl I met down an alleyway earlier (classy as ever); tearful hugs and warm memories are exchanged.

This all-American gal was dressed as an American tourist in Hawaii because she figured her accent would sort out half of the outfit for her. Clever cookie.

What would your mum think about your costume?
“The fact that I’m wearing socks and sandals, probably; it’s a sexy combination though, and everyone wants these hiking socks, but no one’s gonna get ‘em!” This guy really knew his Fear and Loathing in Las Vegas quotes. Unfortunately he was belting them out in rapid, yet slurred non-native English, so I managed to only catch a few of these gems.

So how’s your day going?
“We’re right in the middle of a reptile zoo. And someone is giving alcohol to these goddamn animals.”

Right. And why a reptile zoo, specifically?
“Impossible to walk in this muck, no footing at all.”

Anything to say to the readers of the Critic ?
“We can’t stop here; this is bat country.” What would you say if you could talk to your younger self right now?
Budget mustard: “Don’t do drugs.”

Do you guys have a catch phrase?
Budget mustard: “A leopard doesn’t change its spots; it chases gazelles down and fucks them up. That’s what the mustard army does.”

Heinz mustard: “Where’s the mustard army? Normally when we say that, we have guns and that’s when we shoot them up in the air, but we don’t have any guns.” 2:18pm: My cell phone alarm is buzzing and if I don’t take off soon, I’ll miss my shuttle and have to face the wrath of my mum for missing some very expensive flights.

So you’re dressed up as the genie of the lamp. Have you granted any wishes today?
“Only the innermost desires of dozens of lonely women.”

If you could have one wish, what would it be?
“Like, another six hot cross buns...Actually can I have another wish? I wish that everyone would stop thinking that I’m a fucking smurf.”

What has been your top moment of Hyde so far?
“That’s a real tough call between the hot cross buns and the sausages. Please don’t make me choose.”

What is it about him?
“The facial hair. Love the tickle. I don’t know, he just seems like such a genuine tender guy.”

(The genie then winks somewhat seductively, and I decide it’s time to turn my attention to the vomiting couch man beside him.)

What are you dressed as today?
“A chairman — because it’s a small sofa and I’m a man.”

What gave you the inspiration for this outfit?
“I was pressed for time and ideas at about 10pm in Kmart last night, so it was either this or an Elsa costume designed for a five-year-old.”

I think you made the wrong decision.
“That’s fair, I guess, but the Elsa costume didn’t double as a bed.”

Would you rather be a couch or a chairman?
“A chairman. Because it’s better to run a business than to be a couch.”

What would you do if you could time travel?
“Go back to the sixties: I feel like I missed out.”

Biggest achievement in life?
“I’ve had my butt posted on Otago flatting goods.”.