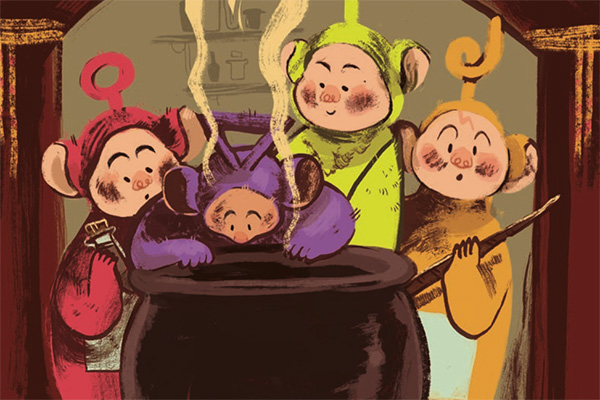 FFIC101: An Introduction to the Horrors of Fanfiction

Fans show their love and loyalty to their fandom in a myriad of ways. Some purchase merchandise, some learn every fact there is to know, some dedicate their spare time to developing intricate cosplay, some people do all this and more.

And some people write fanfiction.

This article is probably NSFW (not safe for work) by the way, as we give you a rundown of the top fanfiction available at a computer near you.

Everyone has encountered fanfiction at some point. Fifty Shades is a good place to start. Author, E.L. James, originally wrote the bestselling novel, which features erotica and manipulation, as fanfiction of another bestseller, Twilight. This should come as no surprise considering the nature of Bella and Edward’s relationship. It was originally titled Master of the Universe and was posted on fanfiction sites under her penname, Snowqueen’s Icedragon.

Slash fiction is as good a place to start as any. This is where a fanfiction writer will take two characters of the same gender from a series and create a romantic and, more commonly, a sexual relationship between the two of them. A fandom notorious for this is Supernatural. A lot of fans ship two of the male leads, Dean and Castiel (the pairing is known as Destiel).

Another Supernatural fandom favourite is known as Wincest. As in, “Win” for Winchester brothers and “incest” for, well, I’m sure you get it. There are a lot of people who attempt to justify this relationship, explaining that the brothers go through a lot of trauma and intense experiences together, have saved each other’s lives countless times and share a deep love, understanding and connection with each other. Obviously, they would end up together romantically, rather than simply sharing a co-dependent, deep, non-sexual but none-the-less unhealthy brotherly bond as depicted in the show. The majority of slash is male/male, but there is a sub-category called femslash. I would give examples from Supernatural as well, but as there are practically no significant female characters in the show, there’s really no point.

Here writers bring two fandoms together to create some sort of terrifying mashup. One of the more bizarre fanfiction pieces places Sherlock and Watson as love interests … plus they had Pokémon. That’s it. There’s also a fanfiction about Harry and Draco moving to Forks (yes, Twilight Forks) and developing romantic relationships with Edward and Jacob. Also Draco inexplicably gets pregnant to Jacob, because why not? “‘No,’ Draco snapped. ‘No you don’t! My father can barely stand to look at me, Jacob’s on the other side of the country and I don’t even know what I feel for this — this baby growing inside of me!’” Believe me, I’m as confused as you are.

The next two examples also involve slash. Most fanfiction isn’t limited to one trope, and often they bleed into each other and intertwine into a scary mess of a story.

Because it’s so easy to make fun of, there’s a lot of comedic fanfiction. This is what makes a lot of horrible fanfiction bearable to read. It’s comforting to think, “Nah, they didn’t write this seriously. It’s meant to be ridiculous and shocking. This is hilarious.”

For an example of pure satire, read ‘A House Elf’s Needs’ by Chaos-chick. It’s a fanfiction featuring Dobby convincing Hagrid to have sex with him. It features lines such as “Dobby stretches, sir!” and “Harry Potter was not big enough to fulfil Dobby’s needs!”

For a more extreme story, there’s another untitled masterpiece. The plot goes something like this: Snape is sad and stressed at Hogwarts. To help him relax, Dumbledore sends him to the “Tubbydome” (yes, this is Harry Potter/Teletubbies cross-fandom fanfiction). Snape teaches the Teletubbies how to make potions, but they resist, begging him to teach them “how to adult”.

After their sexual awakening, they try to escape the Tubbydome through a Shawshank-esque tunnel the Teletubbies have created. Eventually they come across Dumbledore who yells, “You shall not pass” and reveals that the Teletubbies are Deatheaters and must be killed. This is where the fanfiction ends. Quality stuff.

One of the most infamous and well-known fanfiction examples of a Mary Sue is My Immortal. Mary Sue fanfiction is where the main character is simple and idealised, with little personality (think Bella Swan from Twilight). Furthermore, Mary Sue characters are often a self-insert into the story (some people would argue, still think Bella Swan from Twilight). My Immortal is infamous because it is so poorly written, with a glaringly obvious Mary Sue self-insert into Harry Potter. This particular fanfiction centres on Ebony (often Enoby due to atrocious spelling) Dark’ness Dementia Raven Way who is a “totally goffik teenager”.

No explanation can give this fanfiction justice, so here’s an excerpt: “But den Draco looked at me sadly with his evil goffik red eyes dat looked so depressant and sexy. He lookd exactly like a pentragram (lol geddit koz im a satanist) between Kurt Cobain and Gerard. But then I looked at Vampire and he looked so smexy too wif his goffik black hair. I thought of da time when we screwed and the time I did it with Draco and Dumblydore came and the tame where Draco almost commited suicide and Vampire wuz so sportive.” Vampire would be Harry Potter. Because she’s so “goffik” and renaming people things like “Vampire” is definitely awesome.

There are even YouTube adaptations of this particular fanfiction because of how notoriously bad it is.

A lot of fanfiction features uncomfortable and downright bizarre sex scenes. In the past, when people wrote about their weird creepy sexy fetishes, it generally wasn’t published anywhere (save for James Joyce’s stuff; seriously, read the letters he wrote to his wife). Now we have the wonderful invention of the Internet, where any person can post whatever they want on the many, many sites catering to bad writing.

A comedy website, thetoplessrobot, hosts a weekly fanfiction Friday section where they find disturbing fanfictions and comically annotate them for the twisted entertainment of readers. On this site’s top ten “Most Facemeltingly Awful Fanfictions Ever”, Reticfied Anonimity by David Garrett resides in first place.

And it really deserves to be there. It’s a Pokemon fanfiction, and it is very disturbing. It features Gardevoir. Pokemon fans, you know where this one’s going.

The problematic relationship in Fifty Shades is making more and more sense … This is what so much fanfiction is made of. Combining people’s creepy sexual fetishes with the freedom of writing and the ability to publish anything on the Internet.

There’s this whole other subset of fanfiction that predominantly lives on Tumblr. Imagines are found by simply searching Tumblr with the word “imagine”. It isn’t normally detailed fanfiction in the sense of fully fledged stories, but rather sentence-long scenarios. These imagines feature pretty little quotes like, “Imagine Dean (from Supernatural) looking at you like you’re the most beautiful girl in the world after you get married” or “Imagine Draco breaking up with you to protect you from Voldemort.” Some of these imagines are more sexual and creepy than others: “Imagine Stiles walking in on you giving Scott a blowjob.” There are some plain bizarre scenarios as well: “Imagine cursing out loud and Legolas not knowing how to handle it because he’s never heard English curse words.”


Fanfiction is not limited to fictional fandoms. People will also write fanfiction about real people. The most worrying part is that they’re not just defiling a fictional character, they’re actually writing this stuff about real people who are able to read what they’ve written. The most common victims of this form of fanfiction are members of boy bands like One Direction and 5 Seconds of Summer.

A lot of the fanfiction about these boys is pretty tame, and is often an extended version of the imagine trend: “Imagine living next door to Luke Hemmings (from 5 Seconds of Summer) and every Friday night you hear him and his band rehearse in his garage because the music is so loud, you can hear it through your bedroom walls.”

There’s also fanfiction that depicts the reader in a romantic relationship with the chosen celebrity. Most of this is focused on Harry Styles of One Direction. These stories are often written in second-person voice. It’s another extension of the Mary Sue category, but far more direct. A fanfiction titled “He Is My Sun” depicts “you” waking up next to Harry, remembering that “you’re” engaged to him, then proceeding to have sex, written in the least erotic way possible: “Just seconds after you came, Harry let go himself. He hid his face in your neck and grunted loudly as he let go. He moaned your name before he collapsed onto your chest and sighed.”

It doesn’t stop there, though. It never stops there. Because there has to be a fanfiction titled “This Time Around” about Harry being pregnant to another One Direction member, Louis. It depicts the two of them married with a two-year-old daughter, Cree, who refers to Harry as “Mummy”. After putting their daughter to bed, they have pregnant sex. Louis, uh, sexily telling Harry how much he loves him pregnant: “‘perfectly round with my babies.’ Each word is punctuated with a thrust, Louis’ cock touching places deep inside Harry that have him seeing stars. Harry can barely catch his breath, Louis gliding past his prostate and slamming into his sensitive cervix.” Anatomy seems to have gone out the window. That’s good because by the end of the story Harry gives birth and starts breast-feeding his new daughter.

While it seems predominantly an Internet-based phenomenon, fanfiction was around for a long time before that. It exploded in the 1960s, when Star Trek came out. Fans of the show started writing fanfiction as an attempt to fill in all the holes left by the writers, developing and extending the characters and universe further.

Cassandra Clare, who wrote The Mortal Instruments series (a movie adaptation, which was awful, was recently made), started off writing fanfiction where she shipped Draco and Ginny together, which is pretty obvious when you look at the two main characters of The Mortal Instruments. An assertive and incredibly ginger leading lady named Clary is totally in love with a pale, snooty, blond-haired male named Jace. While her writing isn’t necessarily literary genius, it’s still great fun to read as far as fantasy novels about angst-filled supernatural teens go.

Outside published fanfiction, you can find almost anything on Tumblr and fanfiction.net. A lot of people write fanfiction about Harry Potter, probably because it’s such a detailed universe. There’s fanfiction that focuses on Neville, Luna and Draco, among many others. There’s even stuff that goes back to explore the earlier generation, so James and Lilly Potter, Sirius, Remus and Tonks.

Even the show How I Met your Mother wasn’t safe from being rewritten. Fans, unhappy with the awful finale, re-cut, re-wrote, speculated and edited alternate endings to make it more satisfying. Even the show runners made their own alternate ending, which was put on the DVD release.

Fanfiction has the capacity to be great. Budding writers can continue to explore beloved worlds and characters. It gives fans a chance to connect over a common interest and make lasting friendships based on mutual love of a fandom. It allows people to redefine characters as gay, trans, non-white and non-cisgendered. Essentially, it can allow for much better representation and exploration of complex characters that writers often neglect.

However, this article is not here to showcase the merits of fanfiction. It’s here to explain that while fanfiction has the capacity to be fun and great, it also has the capacity to be fucking terrifying. As with everything else on the Internet — there’s always a dark, scary side to it.
This article first appeared in Issue 2, 2015.
Posted 6:26pm Sunday 1st March 2015 by Anonymous Bird.