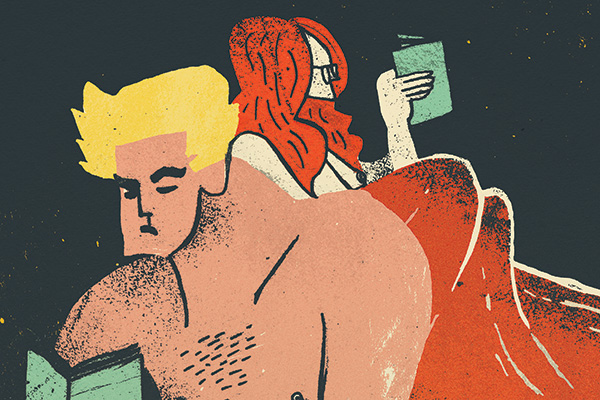 For such a sexually active group of people, the student populace knows surprisingly little about the end goal: orgasm. Critic’s Josie Adams explores the body areas and methods for having the best time.

For many of us, sex is simple. We want it, look for it, have it, and then start all over again. There’s a who, what, when, and where that we consider every time we have sex, but the “how” is often neglected; and it’s the “how” that makes sex worth the search. By “how,” I mean the way you have sex, and the way you reach orgasm. There’s an assumption that, if you push the right button, orgasm is guaranteed; but there are a myriad of buttons you can press, and some people’s are different than others’. I’ve created a run-down of the most common paths to O-town, and how to navigate them.

First off, let’s lay down a basic truth: some parts of the body are more sensitive than others. These might not all be sexy, sexy “erogenous zones,” but they can all be used to maximise sex, which is a very touchy experience. The neck, ears, lips, eyelashes, in-betweens of fingers and toes, and the tops of your thighs are all arousing areas to stroke, nibble, caress, scratch, or suck on. Pay special attention to these at the beginning of foreplay to get the blood flowing and ready to surge and swell up those super-sensitive erogenous zones.

Let’s start at the top. Breasts increase in size when aroused, and a whole lot of extra blood pumps around the nipples, making them extra sensitive. The nipple has been shown to affect the same area of the brain as genitals, and – this has been studied nearly exclusively in women – some people are able to orgasm purely through nipple stimulation. It’s not common, but it’s possible! Try some gentle stroking or licking, moving in circles, possibly nibbling or using clamps. See what’s nice for your nips and even if they don’t get you to orgasm, it could be a damn fine lead-up to what’s below.

The first step in working a penis is getting it erect. Most, when standing at attention, will point up; however, it’s not considered unhealthy for it to point straight out or down, too. There will usually be a curve to the penis, with which there’s quite a bit of variation. The head of your penis is called the glans, and it’s the most sensitive part. The very tip of the penis is where the highest density of nerve endings is, and some tips are more sensitive than others; just like the clitoris. Lightly tapping or licking the dick tip can be an excellent beginning, or even end; for those with more sensitive glans, it’s actually possible to reach orgasm solely through tip-tapping.

The base of the glans – the rim of the penis head – is another good spot to stimulate. A two-handed approach can work best, or even a mouth-and-hand: have one hand or your mouth moving over the sensitive base, and let the other hand grip the shaft just underneath it and move with your mouth/first hand. This creates a full-penis sensation whilst really getting to that sensitive rim.

The clitoris, believe it or not, can be larger than a penis (even in the west). It’s made of the same erectile tissue, and its little, external glans has 8,000 nerve endings – that’s twice as many as in the glans of the penis. The hood of the glans is the same as a male’s foreskin. During arousal, the external clitoris swells to twice its unerect diameter, and its hood swells with it, for protection. Some glans are bigger than others: one person may like direct glans stimulation because it’s bigger and less sensitive; someone else might like clitoral stimulation through a sheet or underwear as well as the hood, because it’s more sensitive. This “magic button,” though, is the tip of the iceberg.

Below its cute little surface lies a spread of clitormass; a mass of erectile tissue which, when stimulated, thrusts forward the labia to be tickled pink and tightens the vagina so it can caress and squeeze whatever is inserted. Ever had a vaginal orgasm? Guess what, it was also a clitoral orgasm! The mystical “g-spot,” it’s theorised, is actually the spot where the clitoris presses close to the vaginal wall. The double clit-and-vag combo is said to be the absolute apex of orgasm. Don’t believe you can have one? Pop a dildo, hairbrush, sharpie, whatever, inside you the next time you’re flicking the bean. Enjoy.

Time for an important health segue! You might actually feel a bump or “pit,” but this is not marking the g-spot; this is part of vaginal rugae, which are bumps and corrugations lining the inside of the vagina so that it can stretch better if you give birth. It’s not cancer, as a couple of people have, terrified, asked me about (you should really go to a doctor with that kind of concern).

To start off, you’re going to want to slide a lubed-up finger into your ass (or, with their permission, someone else’s). Once it’s in, touch the tip of your finger to the anterior wall of the rectum; this is the side of it closest to the front of your body. You’ll have noticed that in there the hole opened up around two knuckles in. There’ll be a dip down, like a slide, and if you hook your finger so it’s resting on this slide, that’s perfect. Now, move your fingertip in light circles – don’t thrust! – and feel for that deep, tingling orgasm building. Ain’t that a fun trick to have in your arsenal? If being penetrated is uncomfortable for you, then – joy of joys – the prostate can also be massaged externally! The stretch of skin between the penis and the anus - the perineum - has our fun little friend nestling right above it. Most journeys of self-discovery tend to result in finding this magic land, which can be manipulated with hand number two whilst hand number one is dealing with your primary means of orgasm.

Orgasms can be witnessed physically, but they put on a damn fine light show in your head, too! The brain is sometimes called “the largest sexual organ,” and that’s not because of a massive surge in sapiosexuality; it’s because orgasm can be heightened, lessened, made impossible or possible just with the power of thought.

Did you know that it’s possible to orgasm using only your mind? The whole process can basically be described as a waking wet dream. When doing it for the first time, you should set aside about an hour; it can take twenty or so minutes to first feel the tingle of a building orgasm. With practice, this time will shorten dramatically! Sit upright, open your chest, and do the kind of breathing yoga teachers love: fill your belly with air and, once you’re relaxed, begin to push out with your genitals in time with your breathing. Imagine the air is filling them up, too. You can fantasise throughout, if it helps. You should begin to feel a tingle or pressure in your genitals, which will build up. Try not to force an orgasm; just relax into the sensations and enjoy them. Don’t think about an end goal; enjoy your fantasy. Keep pushing out your genitals, and just let the Big O happen!

At the same time, the brain’s inextricability from sex can result in some scary emotional surges. Crying and/or laughing during or after sex is well-documented and not unhealthy. Crying can be a sign that you aren’t comfortable or are in pain, which you should definitely consider; your partner should not make you feel this way. If there’s nothing wrong, though, crying can still happen. You might be feeling tired, fragile from another event, or be otherwise unprepared for the hormonal floods of sex. This can make you cry. If your partner is crying during sex, you should stop and check on them. If they want you to continue, that’s fine – if they don’t, then don’t.

There is another basic truth you should know if you’re going to have sex: lubrication is really, really important when penetrating. Shoving anything into anywhere as delicate as the skin around your genitals and anus requires a slick surface and delicacy, otherwise you will tear. You might be tempted to forgo buying lube and just rely on “getting wet,” but your body can sometimes take a long time to react to an act; it can take up to fifteen minutes after foreplay initiates to get wet, and one in five women have vaginal dryness (this can be treated fairly easily with a visit to your GP).

As handy as these tips are, they may not always work. You might have a headache, be tired, or have had a nipple piercing that dulled its sensitivity. Sometimes, you’re just not “in the mood,” and that’s a good enough reason to not have sex on its own; you’re not likely to orgasm. Some people have anorgasmia: they just won’t orgasm (this can be exacerbated by certain medications).

If there’s one thing the anatomy of arousal demonstrates, it’s that all our genitals are just variations of the same combination of materials. You’ve typical “male” and typical “female,” but this isn’t a spectrum: it’s an endless galaxy of different combos of glans and skin and fluids and ducts and sizes and colours, and they all have their own special moves. Press the right buttons and get them to orgasm, yeah, but you’re gonna have to learn their unique code.