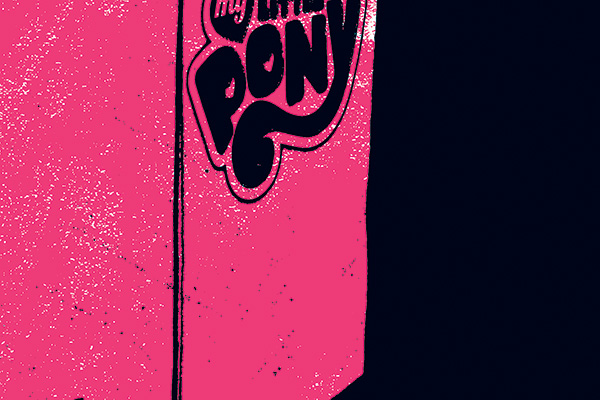 The Mysterious World of Bronies

In recent years, a bizarre new subculture has sprung up, based on fandom of the television series My Little Pony: Friendship Is Magic. Its predominantly male, adult membership call themselves bronies. But what do we really know about this group? Thomas Raethel investigated the subculture, and found a largely secretive group intent on writing its own story.

It was 1982. The Falklands War was beginning, and Michael Jackson’s Thriller was at the top of the charts. American illustrator Bonnie Zacherle began to produce My Little Pony, a range of rubber dolls marketed towards pre-pubescent girls throughout the United States. Little could Zacherle have known that 31 years later, her trademark would spawn a conference in Baltimore that would attract roughly 8,000 attendees – primarily fully-grown men.

2013’s “BronyCon” was the third such annual conference, and is unlikely to be the last. The men and women who attended it identify themselves as “bronies” (a portmanteau of bro and pony), and have come to epitomise the flurry of subcultures that have emerged in recent years thanks to the dynamism of internet forums.

The precise origins of My Little Pony fandom remain hazy. It has, however, been noted that increased interest in the brand coincided with Hasbro’s 2010 television revamp My Little Pony: Friendship Is Magic. Like many other subcultures considered perverse by much of the general public, bronydom has its roots in the infamous website 4chan.org. Initial conversations on 4chan in October 2010 largely involved animation enthusiasts watching the show ironically and sharing their thoughts in an objective manner. But objectivity soon gave way to subjectivity as the same critics began to adopt monikers used in the show. Nobody became “nopony,” anybody became “anypony,” and everybody became “everypony.”

Bronies were quickly marginalised by other users of 4chan, and were effectively expelled from the community through word-filters and moderators. Independent websites were established for these migratory proto-bronies, facilitating a rapid expansion in numbers. Between May and August 2011, searches for “bronies” on Google exploded. Bronydom transformed from a fringe group on the oft-called “arsehole of the internet” to a fully-fledged subculture virtually overnight.

Bronies share their origins with a number of undesirable siblings. A prime example is the “furry fandom.” In what can only be described as gentrified bestiality, “furries” participate in sex acts while garbed in full length plush outfits designed to imitate various members of the animal kingdom. Many early bronies were converts of fringe movements such as furry fandom: they channelled cosplay and My Little Pony into sexual fetishes, which may help to explain the development of practices such as “clopping.”

Most bronies, when asked, will identify with one of the main characters from the show on a deeply personal level. The main characters include Twilight Sparkle, Rainbow Dash, Rarity, Fluttershy, Pinkie Pie and Applejack, all of whose names suggest the mental age of the intended audience (with the possible exception of Applejack, who shares her name with a potent alcoholic beverage).

An interesting development in the My Little Pony canon was the June 2013 release of a feature length film, Equestria Girls, in which the ponies introduced in the television series are transported to a different world, manifesting as (female) teenage humans. This rather extreme anthropomorphism echoes what has become a widespread practice in brony forums: humanising the My Little Pony characters. As such, some media outlets, including Slate magazine, have accused the film’s creators of pandering to a brony desire for sexualised My Little Pony media.

According to statistics on Google, a rapid internationalisation of interest in bronydom is apparent. In a unpredictable twist, searches relating to bronies are rapidly gaining traction in Indonesia, a country that is 87.2 per cent Muslim. It appears, therefore, that bronydom may transcend religion (although a 2012 study revealed that 59.81 per cent of brony respondents in the United States consider themselves either atheist or agnostic).

New Zealand has not escaped the brony phenomenon. No research has been done into the subculture’s development here, but an indication of its following can be gathered from the largest New Zealand brony Facebook group, NeighZealand. With 479 fans, the group is the largest of a considerable cluster of similar pages, which total roughly 1,000 members. Many more closeted brony New Zealanders probably exist, and it is possible that a sizeable minority choose to not use Facebook.

A critical appointment in the show’s development was that of developer Lauren Faust, who had previously worked on the Cartoon Network’s The Powerpuff Girls and Foster’s Home for Imaginary Friends and had played an integral role 1990s “Disney Renaissance,” responsible for films such as Hercules and The Little Mermaid. In each of these offerings, adult themes and humour were subtly paired with animation to make the content easily accessible to children. However, unlike in the case of My Little Pony: Friendship is Magic, the majority of adult viewers were parents watching the films with their children. The average modern brony, it should be noted, is a single, heterosexual Caucasian man in his early twenties.

In internal studies, bronies often cite the show’s artistic direction as the factor that draws them into bronydom. This differentiates My Little Pony from the older animations that attracted adult viewers. Whereas the older Disney films (and even the original 1980s series of My Little Pony) were nuanced and subtle, the garish colours of My Little Pony: Friendship is Magic are largely the result of the show’s digital origins in Adobe Flash. This could help explain the show’s appeal: adults on internet forums who have existing relationships with amateur, Flash-animated productions are more likely to be bronies than those who don’t.

A surprising but inevitable development of the brony culture is the ever-increasing number of “pegasisters” (yet another portmanteau, this time of Pegasus and sister). Totalling 11 per cent of the brony population, these female fans remain a small minority. One explanation for this may be that female fans do not experience the feeling of social irreverence in which many male fans take pride; male bronies often derive a sense of satisfaction from their subversion of deeply rooted gender norms.

Celebrities accused on brony forums of closeted bronydom include wrestler John Cena, celebrity chef Anthony Bourdain, musician Weird al Yankovich, and even President Bill Clinton. Whilst it is more likely that none of these men are participants in the brony subculture, less prominent celebrities have been seen donning Pony regalia openly in public, including music producer deadmau5.

Bronies have justified their fixation by highlighting several key aspects of My Little Pony. The oft-quoted slogan “Love and Tolerance” is one of many attempts to attach greater meaning to what is essentially still a children’s television show. Unfortunately for bronies, the word “tolerance” has never once been uttered by any of the characters. The slogan appears to be the creation of adult fans who wish to impose their social disenfranchisement onto the ethos of My Little Pony.

In an age where any group of people from virtually any corner of the globe can converge in a digital medium, increasingly unlikely subcultures are beginning to emerge. Bronies are one of many, but stand out in both number and perplexity. It remains to be seen how long the culture’s popularity will last. Bronydom will likely be seen in the future as an extreme example of the power of internet forums to facilitate nascent subcultures.

It should be noted that in the process of writing this article, I found it difficult to locate studies relating to My Little Pony: Friendship is Magic fandom that weren’t conducted by bronies themselves. While it is reasonable that bronies show interest in the demography and characteristics of their own subculture, accepting many claims made by brony researchers requires a certain suspension of disbelief. For example, herdcensus.com has deduced that 4.0 to 6.8 per cent of the Internet-using US population “strongly identify” as bronies. This amounts to a population of between seven and 12.4 million. While the brony subculture has grown rapidly in the three years since its inception, an American followership two to three times that of New Zealand’s entire populace is clearly exaggerated, undermining the credibility of websites like HerdCensus.

A documentary titled Bronies: The Extremely Unexpected Adult Fans of My Little Pony premiered on 4 November 2012 in Anaheim, California. I watched the film hoping to gather some unbiased information, but from the outset it was clear that the film is poorly shrouded propaganda. Criticism of the sexualisation of the show is quickly written off as right-wing sensationalism supported by media outlets such as Fox News. That aspect is thus largely ignored, and the majority of the documentary focuses on socially inept individuals who perceive their bronydom to be a vital social lubricant. The film explores the international popularity of bronydom, interviewing bronies from locations as diverse as Manchester and Tel Aviv.

One of the principal researchers of bronydom is Dr. Patrick Edwards. His website bronystudy.com, formed with Dr Marsha H. Redden, serves as one of the more prominent outlets of brony academia. Studies relating to both bronies and non-bronies have been explored by Edwards. It appears that few of his findings, however, have been peer-reviewed by other psychologists. Vitally, Edwards’ son is a brony, and on the website’s Frequently Asked Questions page Redden admits that Edwards is “involved in other aspects of the fandom.”

Whether due to a widespread ambivalence towards My Little Pony fans or an intellectual whitewash by determined bronies, conflicts of interest have led to an ill-researched and yet rapidly growing subculture.