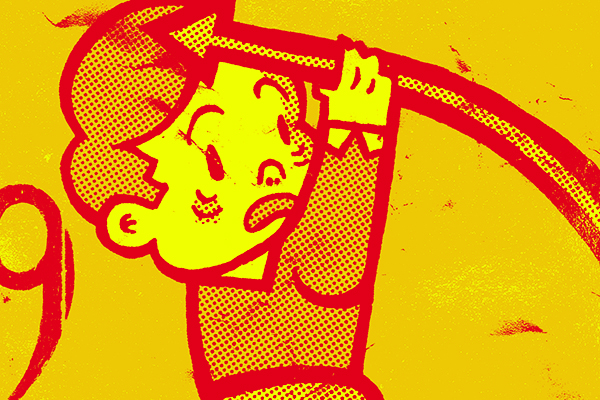 I’ll think of a title tomorrow

“I never put off till tomorrow what I can possibly do – the day after tomorrow.”
- Oscar Wilde

For some, writing a feature article in one day might be daunting. But I would rather it were always this way. As a fourth-year with admittedly unhealthy study habits, my brain has become so accustomed to cramming essays the night before they’re due that I need to feel like there is a knife pressing against my neck to even begin to write. But at the same time, one small thing constantly lurks in the background: procrastination. Unlike for Oscar Wilde, we have no tomorrow here at Critic, and if there is one thing that may stop us from completing our quest to complete an issue in 24 hours, it is the evil of procrastination. And so, in keeping with the “24 hour” theme, I thought, why not write about it?

As students, I think we can all agree that procrastination is a bastard. It is something that affects us all, whether we like it or not. We feel it as it drags us away from our crucial assignment to check Facebook. We see it outside, as the sun stays out longer than 10 minutes on the day before our essay is due. And we smell it in the food court, drawing us in for a snack. Yes, procrastination affects us all. It is like a virus, and as the end of the academic year draws near, as assignments start to build up, and as exam pressure begins to increase, so too the procrastination virus begins to conquer our minds.

History is littered with warnings about the consequences of procrastination, and fittingly, writers have a lot to say. Charles Dickens once quipped: “My advice is to never do tomorrow what you can do today. Procrastination is the thief of time.” And a surprisingly serious Hunter S Thompson warned, “A man who procrastinates in his choosing will inevitably have his choice made for him by circumstance.”

Procrastination is where you replace high-priority tasks, i.e. a university assignment, with tasks of low-priority, i.e. a Facebook status update. Importantly, while procrastinating you derive some sort of enjoyment from the low-priority task, and consequently put off finishing the high-priority task. It is not a recent phenomenon, and some psychologists go as far as calling it the “ancient nemesis” of humans, arguing that it parallels human civilization and “may” have originated 2.5 million years ago.

Let’s set the scene. It’s Friday night, and your friends are all heading out for a big one, but you have an assignment, worth a solid 30% of your grade, due on Monday. Your preparation is adequate at best, and will require a solid three days and nights work. Do you a) crack right into it – get it out of the way so you can enjoy things after you’ve finished, b) head out with your mates – get a night on the piss out of the way and be good to go tomorrow, or c) settle into a night of Facebook, Twitter, YouTube, and, oh, a few notes at some stage.

Out of the bunch of students I spoke to for this article, it became extremely clear that those who fall into category a) are about as rare as two pandas having sex. It seems the majority of students are either b) or c), or a combination of the two. Not one person declared himself or herself free of the procrastination virus, and each joked nervously about their incredible abilities to do anything but university work.


Seamus, an economics major, and Evan, a law/commerce major, both admit to being heavily infected with procrastination. They cite Facebook, Twitter, and YouTube as their preferred forms of procrastination – and if they’re at home Xbox will take precedence over the pending essay on legal history. Evan says that “In the end I’ll get the work done, but I can’t work until the panic sets in – unless there’s pressure to get it done. Seamus adds, “Until the heat comes on.”

Even honours students struggle with procrastination. Tom, an English student currently battling to finish his dissertation, describes himself as a “hardcore” procrastinator. He says he does things that are “semi-productive”, and in doing so allows himself to “justify” his procrastination. “You convince yourself it’s good and worthwhile.” As an honours student myself, I can definitely relate. With my dissertation due in only three weeks, procrastination has become my life. But after watching back-to-back episodes of It’s Always Sunny in Philadelphia over the last few days, I think it might be time to get back into it. Maybe.

Indulging in delicious snacks is a prime form of procrastination for both Emma, a psychology/history student, and Hannah, a law/classics student. Emma adds that she tends to find pursuits she would normally find less attractive, like fitness or cleaning her room, much more attractive when the prospect of finishing an assignment looms in the background.

They both agree that Facebook and the Internet have made it incredibly easy to procrastinate. “Facebook’s a biggie – you don’t even have to move, it’s so easy,” says Hannah. She also loves “mutual procrastination”, where you procrastinate with somebody, and as a result diminish the “guilty” feeling you get from not doing your work. I’ll let your mind wander now.
Judging from the atmosphere in the Critic office as I write this article, clearly these guys are not alone. We only have 24 hours to get this issue finished, yet the air is thick with procrastination. With the number of people on Facebook, watching, ahem, “online videos”, and tucking into various foods and drinks, it is clear procrastination is rife amongst the student population.

The comforting thing about procrastination is that we all seem to do it. My rickety study performed on Union Lawn may not be the most trustworthy measure, however a quick search in Google Scholar for “procrastination studies” will return numerous positive correlations between students and procrastination. Trust me, you are not alone. I’ll have a line of that please

From a psychoanalytical point of view, according to Sigmund Freud’s “pleasure principle”, procrastination is like a drug. Humans tend to seek out pleasurable activities and avoid suffering, or pain. Delaying a pending task till a later date is enjoyable, so we associate pleasure with the action. If procrastination is a drug, then it is definitely the ecstasy of the study world. It is a respite from all the chaos and uncertainties that come with studying and beginning an essay. During those minutes/hours/days that you spend putting off your work, you experience a sense of pure joy.

Procrastination is that voice that creeps into your head as you make a subconscious decision to watch yet another episode of Mad Men, rather than start on that second paragraph. That voice that whispers, “Just one more… it’s OK, you have plenty of time… just watch ONE MORE…”

But then the second voice creeps in seconds after the episode has ended, this time yelling in your ear as you wake up to the clear reality that you are nowhere near finished. Your heart starts racing and you start freaking the fuck out, before a calm voice whispers, “Just one more episode, go on”, and you begin to relax again, slipping back into the sheer ecstasy of procrastination land.

While procrastination can be a source of laughter amongst friends, it can be a devastating and ultimately destructive habit to get into. Sure, in the short-term it feels good to put off doing that assignment, to watch some video clips, check Facebook, or go for a run, but in the long-term, it could affect your grade, and ultimately your degree.

Dr Jacques van der Meer, of the University of Otago College of Education, argues that procrastination occurs “when you don’t have the motivation to do what you know you should”. He says it is a vicious cycle, as the most difficult part is getting started, which becomes increasingly difficult the longer you put it off. Then self-doubt kicks in, and it becomes harder and harder to get into the game.

Dr Van der Meer believes that beating procrastination is directly linked to developing proper study habits. He says the best way to go about it is to incorporate the “rewards system” discussed earlier. Instead of “cramming” and studying for hours on end, he says that you should break it up into little “chunks”. Start with chunks of 20 minutes. After the 20 minutes is up, spend up to five minutes doing something enjoyable, like Facebook, as your reward, before doing another chunk.

Dr Van der Meer argues that our brains are more effective and retain more information when studying for short periods. It is also good to mix up the information, rather than focussing on one topic for hours on end. If you can keep this practice up your brain will begin to associate pleasure with the study “chunk”, and it will become much easier to focus.

So, jokes aside, with all sorts of assignments due over the next few weeks, and potentially life-changing exams taking place in less than two months for some, the next wee while is going to be very stressful to say the least. Dr van der Meer says that if you are finding the stress a little too much to handle, feel free to go and speak to the lovely people at the Student Learning Centre. They can help you with study routines, essay writing, and exam preparation. But otherwise, good luck over the next few months. There is nothing more difficult than knuckling down as the sun starts to shine. I am praying for rain over the next two months. I beg you to join me.