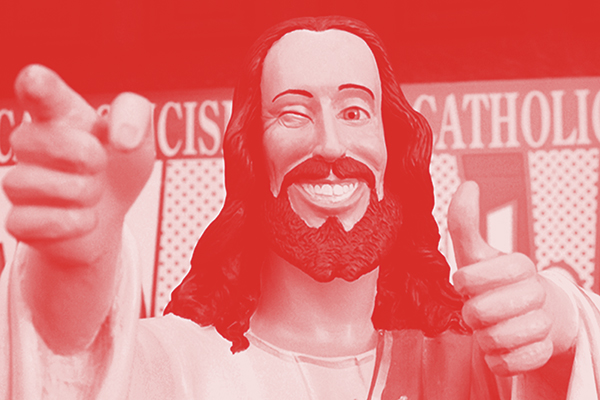 Get Your Faith On

It would be pretty easy, too easy, for a student magazine to write an article about religion and simply tear it down. Religion is stupid in the face of any form of rationality. Pretty much every faith asks you to believe in something unseen – a deity that can’t be understood, that is invisible yet omnipotent and all-powerful. But that is the nature of the beast; it requires a leap of faith, and acceptance that there is something greater than you, to become religious in the first place.

Before we had science to explain natural phenomena, we had religion. Imagine a scary-as-fuck world with lightning and fires and wild animals that want to kill you and no explanation for it all. I bet it would take you less than half a day to think up a deity that was causing all of this shit to happen. A lot of atheists get pissed off at religious types. They can’t understand why anyone would need an imaginary man in the sky anymore when they have rationality and science to explain the world. And on top of that, some religions, notably evangelical Christians, continue to try to force their religion down the throats of those who want nothing to do with it.

But maybe it would help if we all knew a little bit more about some of the different religions. If you’re an atheist you’ll probably still find a lot of it ridiculous. Even within the different faiths there is a movement from a literal interpretation of the classic texts to a more open one. But nevertheless, rather than a polemic ripping on religion generally, here is a very one-sided explanation of three of the world’s major religions: Judaism, Christianity, and the relative newbie, Islam.

Disclaimer: the following is one point of view on each of the below religions that aims for some historical accuracy. If it’s not accurate, tough shit.

Judaism is the oldest of the three Abrahamic faiths, though it is generally ol’ Moses himself who is thought of as the founder. Faith probably isn’t really the right word for Judaism. Yes, it is a religion, you can practice it, and you can – technically – convert. But in reality Judaism is an identity. Impressively, Wikipedia nails it, saying that Judaism “is the religion, philosophy and way of life of the Jewish people” (note to all Critic staff: no you are not allowed to start quoting Wikipedia in your pieces, editor’s prerogative).

Basically, Judaism says that there is a relationship between God and the Jewish people, and that the whole deal was written in stone (lol) between God and Moses when he came down from the mountains with the Ten Commandments (actually, there were 13). Judaism was one of the first monotheistic faiths (which means they believe that there is only one god), and is also the longest lasting. Early on they probably believed that their god was simply superior to the gods of other tribes, and eventually this developed into the idea that there was actually only one god.

Jews have a really long history of being oppressed and generally getting the shit kicked out of them. They were enslaved by the Pharaohs of Egypt and got their temple destroyed. Then the Romans occupied their land during the era of Jesus and destroyed their temple again. And finally, after centuries of exile and persecution in Europe (Christians accused them of killing Jesus and drinking the blood of Christian children, amongst other things), there was, you know, that whole Holocaust thing. No one knows for sure, but as much as 80% of the entire world’s Jewish population may have died in the Holocaust.

So people felt bad for them when the international community helped them establish the State of Israel after World War Two. And while no one (seriously, no one) with half a brain is arguing that Israel shouldn’t be allowed to exist, shit has gone downhill epically for Israel. Let me first say that Israel isn’t representative of all Jews, and that even within Israel, there is a serious opposition to many government policies. Let me next say that Israel is illegally occupying and colonising land that does not belong to them. Orthodox Jews argue that God promised them the land, so it’s fine if they steal it from Palestinians. Fuck off. It’s not okay. It’s immoral and illegal. It’s hard to imagine what life is like for the Palestinians.

I think it is almost easier to imagine what life would be like in Nazi-occupied Europe, since we’ve seen that more in the movies. And interestingly, that is what it feels like when you travel through the West Bank.

Okay, so I ended up off topic. But Judaism has a stain against its name, and it will until it recognises, and more importantly rectifies, the brutal and horrific injustices it causes every single day against the Palestinian people. Israel was a state created for the Jewish people, so I think it’s fair to call on all Jewish people to do what they can to end injustices created by Israel.

It’s all in the name really, isn’t it? The Jews believed, and still do for that matter, that God would send Christ the Messiah down to earth to help rebuild the Jewish Temple and generally bring God’s law back to earth.

So 2012 years ago (give or take a bit), a guy called Jesus was born to a lovely lady named Mary and a guy named Joseph, except maybe he didn’t actually have that much to do with it. This guy grew up, and by the age of 32ish he was running all over the place causing trouble with his political message that maybe the old school Rabbis didn’t have all the answers.

Long story short, the Jewish elders had the Roman rulers sentence him to death for blasphemy, and he got stuck up on a cross. That was supposed to be the end of him, except it wasn’t at all. Years after his death, people – well, men (called the evangelists) – started writing about Jesus and how awesome he was. Jesus, like Muhammad, never wrote anything down, and neither did anyone else that lived or worked with him. The earliest biblical record of Jesus was written at least 50 years after he died. This tiny little Jewish sect eventually broke away from Judaism and became Christianity. Today, it is the largest religion in the world with over 2.2 billion adherents, loosely split into Catholic, Protestant, and Eastern Orthodox. The basic belief of the faith is that God sent his son Jesus down to earth to die for people’s sins, so that they can all eventually go to heaven (I’ve never really understood why God couldn’t just let everyone into heaven if he wanted to, he is God after all, but whatever).

According to the evangelists eventually Jesus will come back to earth, judge everyone, reign in some kind of strange theocracy setup, and then everyone will go to heaven. The other bit which is hard to get your head around is the concept of the Holy Trinity, which says that Jesus, God, and this other mysterious character “the Holy Spirit” are actually all the same thing, while at the same time being three different things. I would explain it better, but I can’t. To be a Christian all you really need to do is believe that Jesus died on the cross for your sins, and that you get to go to heaven because of that. Easy.

Today Christianity has fractured into a really wide range of different denominations, from Eastern Orthodox to Mormons and evangelicals. While in most Western countries Christianity has taken a backseat in society, in the United States it still has a very prominent place, with an estimated 75% of Americans identifying as Christian and 60% claiming to belong to a congregation. In comparison, about 50% of Kiwis identify as Christians and about 15% belong to a congregation. In typically Kiwi fashion, enough people listed themselves as Jedi in the 2001 census to make it the second-largest religion in NZ. There were more Jedis in Dunedin than anywhere else in the country.

A common misconception about Jesus is that he possibly didn’t exist at all. Jesus definitely lived; there is a wealth of historical knowledge about him. The other common misconception is that Jesus was a Christian. Jesus was born, lived, and died a Jew. Jesus never heard the word Christian, and he definitely wasn’t trying to form a new religion during his life. He was simply trying to reform the political system of the Jewish people. Probably the saddest thing about Christianity is that the original message of loving your neighbour, taking care of the poor, and living a simple life has been lost, or at best perverted. Jesus was a pretty good sort, and a lot of sad horrible shit has been done in his name. Just look at “Bishop” Brian Tamaki.

Islam is the legacy of the Prophet Muhammad (Peace Be Upon Him), who lived in the Arabian desert during the Seventh Century. According to Muslims he was the last messenger of Allah (which just translates as God), and received the word of God to finalise the message (and correct a few mistakes) that had been sent through all the other prophets. Muhammad’s message was written down by his followers in a text that became the Holy Qur’an, which is the base holy document of Islam. The Qur’an can only be written in Arabic, and provides the basic rulebook for being a good Muslim.

Interestingly, Muslims think that Jesus, Moses, and even Buddha according to some rulings were also messengers from God, and that Muhammad is simply the last in a long line.
Anyway. After Muhammad turned up with his message, he wasn’t very warmly received, as he was arguing once again for monotheism (just one god). He had to hightail it to Medina before eventually raising an army and retaking the city of Mecca, which today remains the centre of the Muslim faith. There are five main tenets, or pillars, of the Islamic faith. First up is the basic creed, which states that there is no god but God and that Muhammad is his messenger. Say that (and mean it), and you’re a Muslim. Second are the ritual prayers that are supposed to be performed five times a day. Third is alms giving to the poor, which Muhammad was pretty big on (very similar to Jesus). Fourth up is fasting during the month of Ramadan (happening now). All food and drink must be abstained from during daylight hours in an effort to bring the individual closer to God. Last is pilgrimage: every Muslim who is able has to travel to Mecca once in their lifetime.

It wasn’t until after Muhammad boosted off to paradise that Islam really took off. Within 120 years the Muslim Caliphate was in charge in central Asia, the Middle East, Northern Africa, and all the way to the border of France. Islam fractured into the Sunni and Shi’a over an argument over who should succeed Muhammad as the ruler of the Islamic community.

Today it is estimated that nearly 25% of the world’s population is Muslim, making it the second-largest (and fastest-growing) religion in the world. Sadly, in the 21st Century Islam has become synonymous with terrorism. I’m going to steal a great analogy from the West Wing here: Islam is to terrorism as the Ku Klux Klan is to Christianity. Those people running around blowing people up in the name of Islam are extremist adherents of Islamic sects called Wahhabism and Salafism. And their actions are more about politics than anything to do with religion. They’re trying to overthrow the secular rulers of the Middle East to install theocracies that will enforce their interpretation of Sharia (or Muslim) law. Mainstream Muslims are perfectly peaceable and happy to get on with their lives, even if they do have issues with American foreign policy.