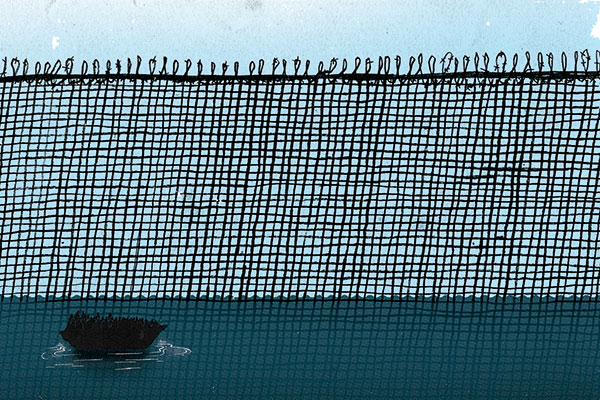 We’ve all been in situations where we don’t feel safe and need to escape. Maybe it was a sober night at Monkey Bar, a slightly-too-ruckus Castle St party, or being confronted by a stranger in a dark alley. I was chased down Arthur Street by a drugged-out lunatic at 2am just last week. But luckily for us, such conflict is usually quite easy to avoid. A short taxi ride (or a long run) and we are home safe and sound.

But imagine that instead of ultra-ghetto North Dunedin, you are in Afghanistan. And instead of lusty first-years chasing you, the Taliban are after you and your family simply because you’re different. You are literally fleeing for your life.

You have no choice but to leave your family behind to escape and build a new life, clinging to the slim hope that one day you’ll be reunited. You fork out all your
savings and more, leaving your fate in the hands of vicious
loan sharks.

The journey is horrific. Instead of a taxi, you are huddled in the back of a truck, then crammed into the hold of a boat that looks like it would never float, especially not with several hundred other desperate people on it. The conditions are treacherous, but really there is no choice. You die where you are or you hold onto the slim chance you may reach somewhere hospitable, and not die on the way there.

Mohammad Amiri is now a New Zealand citizen and the President of the Afghan Association in Wellington. He was once an asylum seeker, and this story closely resembles his. Speaking from his new home in Wellington, he told me the dramatic story of his flight from Afghanistan in 2001, while fearing for his life.

“For decades we have had war in Afghanistan. Sometimes you have to leave the country if you want to live. If I had stayed I would have been killed, as so many others had been killed back in my city.” Like many asylum seekers, Amiri had no chance to go through a refugee camp. He made the arduous journey through Pakistan, Hong Kong, and Malaysia to Indonesia, where he contacted people smugglers who he paid US$4000 - 5000 to take him
to Australia.

Who are Asylum Seekers?

Before getting started, it is important to clarify a few points, as I am sure not all of you are law or politics majors. The United Nations (UN) defines an asylum seeker as someone “who has applied for protection as a refugee and is waiting for his or her status determination”. Amanda Brydon, of Amnesty International New Zealand, says: “Asylum seekers have a legal right to seek protection under the Universal Declaration of Human Rights, the Refugee Convention, and the 1967 Protocol, [all of] which New Zealand is a signatory to.”

Michael White, of the New Zealand Human Rights Commission, explains: “Asylum seekers flee their home country because they face persecution. They seek safety and refuge in either an adjoining country or a third country.” Brydon adds, “It can be extremely difficult to flee, as countries are often in chaos as a result of the violence and instability. To make ones way to a UN refugee camp to be processed can often be near impossible for individuals and their families to do.” Many countries are also not signatories to the international agreements, which make countries who are, like New Zealand and Australia, more attractive.

While there is no “normal” way to become a refugee, the danger such people face in fleeing their country often means they have to take desperate measures. Gary Poole, of the Refugee Council of New Zealand, explains: “Asylum seekers usually have no choice. They have frequently fled their home countries because of immediate danger of persecution, detention, torture, or execution.”

Some resort to people smuggling, an illegal practice where asylum seekers are smuggled into a country for a fee, often by boat. These asylum seekers have come to be known as “boat people”, and over the last decade their plight has become increasingly prominent as people flee from conflict in the Middle East and parts of Asia. In 2010, 6,555 people in 134 boats attempted to reach Australian shores.

Nonetheless, seeking to reach Australia by boat is an extremely dangerous practice. More often than not the boats are hardly seaworthy, and are packed with several hundred people. In October 2001, a boat carrying 400 people crashed into rocks off Christmas Island off the West Coast of Australia, and 353 people drowned. The death toll included 146 children and 142 women. Just last month, around 50 people are believed to have drowned after a boat carrying 200 passengers crashed in a similar spot.

The risks people take on these boats show just how desperate their situations are. Amiri puts it bluntly: “They have two options: die where they are, or take the risk [on the boats] and maybe they will live.”

In August 2001, Amiri and several hundred other asylum seekers were crammed into a 30-metre long wooden fishing boat aimed for Australia. This was the start of a saga that came to be known as the “Tampa Affair”.

Not long into the journey, Amiri’s boat began sinking just off the North West Coast of Australia. The Tampa, a Norwegian freighter, responded to the distress call and rescued everyone onboard. Amiri recalls, “Luckily the Tampa rescued everyone, as fifteen later minutes the boat went down.”

The Australian government eventually came up with the so-called “Pacific Solution”. Two detention centres for the asylum seekers were built on the pacific island of Nauru. The refugee status of the asylum seekers was determined there, rather than on Australian territory. But for some, what was supposed to be six months of processing turned into several years of living in oppressive conditions.

Amiri describes his time on Nauru as “Hell – for one 45 — 50 degree heat, but not just the weather: the situation, the emotional, physical conditions… Everything was like hell… Imagine you don’t know about your family for three years, and they don’t know about you either.” Amiri ended up spending three years on the island, and during this time he became aware of New Zealand. He began to write to then-Prime Minister Helen Clark regularly, pleading with her to let him come to New Zealand. Clark responded that first the United Nations High Commission for Refugees must accept him (UNHCR), and then New Zealand could assess his case. Eventually the UNHCR accepted Amiri, and he joined other refugees from the Tampa in New Zealand.

Why do they want to come here?

Amiri says, “New Zealand has one of the best reputations in the world for taking in refugees, and we should keep that.” From the Greens through to National, this pride crosses all political boundaries.

Jan Logie, of the Green Party, says: “The Green Party is proud
of New Zealand's tradition as a caring global citizen which goes right back to our involvement in the writing of the declaration of human rights, which binds us to accept people seeking asylum.”

Minister of Immigration Nathan Guy is “proud of our humanitarian record... We accept around 750 genuine, UN-mandated refugees every year.” New Zealand and Australia are part of a group of only ten countries in the world that accept UNHCR quota refugees for resettlement. Further, in New Zealand we process an average of 250 — 300 asylum claims each year.

Guy recalls United Nations High Commissioner for Refugees António Guterres’ visit to New Zealand earlier this year. “He praised the quality of our resettlement programme, and attended a Marae welcome ceremony for newly arrived refugees in Hamilton. He said that it was ‘one of the most genuine and moving reception ceremonies’ he had seen for refugees anywhere in the world.”

National has recently claimed we must be prepared for a mass arrival of asylum seekers by boat, but whether New Zealand is a target is debatable. Amiri recalls that when he left Afghanistan he had never even heard of New Zealand. “I knew about Australia, but only in Nauru did I meet someone from New Zealand and became interested.”

In April, the Government introduced the Immigration Amendment Bill as a means to deter people smuggling and cope with the potential mass arrival of asylum seekers. It is a controversial piece of legislation and has already drawn strong criticism from a wide range of influential actors, including Amnesty International, the New Zealand Human Rights Council, the Refugee Council of New Zealand, and the United Nations High Commissioner for Refugees.

Guy says, “New Zealand has been targeted by people smuggling operations in recent years, and we know that the risk is real.” He believes the bill will show New Zealand is not a “soft touch”, and will hopefully “discourage the dangerous and cruel business of people smuggling, and help us deal with such an arrival if it does occur.”

While the bill was designed to deter people smuggling, critics argue that in fact it is discriminatory to asylum seekers arriving in groups by boat. Logie believes it only “sends a message of mistrust, and reinforces a sense of fear and burden [in the asylum seekers].” Further, it is seen as an unnecessary response, as New Zealand has never had asylum seekers arrive by boat.

One of the main points of contention is the definition of “mass arrival” as an arrival of more than 10 people, far less than the 500 the bill was designed to deal with. The bill also allows for the detention of “mass arrivals” for an initial period of six months. According to Brydon, “detention can have serious consequence on the rights and health of an individual”, and should only be used as a “last resort”. From experience, Amiri is also wary of the six months’ detention period. “Australia said the same, to hold for six months, but it turned out to be over three years.”

The Office of the United Nations High Commissioner for Refugees also expressed their concern. “The combined effect of these proposed measures represents a significant change of direction from New Zealand’s traditional, and very positive, approach to asylum-seekers and refugees.”

So where to now?

While sad to have left Afghanistan, Amiri is very grateful for the opportunity to start a new life with his family in New Zealand. “New Zealand is beautiful, it’s amazing, and I can’t believe it. When I say to people that New Zealand is paradise they don’t believe me, but actually it is paradise.”

White argues that punishing the people who are smuggled will not stop people smuggling. Rather, regional cooperation in shutting down the people running the smuggling operations themselves is the answer. Brydon agrees, and believes governments need “to address the reasons that force asylum seekers onto boats.”

We live incredibly safe and sheltered lives here in New Zealand, especially in the haven of North Dunedin. While this is not a bad thing, we should not take it for granted and sit idly by watching people suffer around the world. One way we can help is to give those people a new chance at life here in
New Zealand.

Unlike Australia, we don’t have to deal with the immediate issue of thousands of asylum seekers arriving by boat every year. Our isolation gives us the advantage of time to create a fair and just system to deal with asylum seekers, rather than a poorly thought-through piece of legislation that will damage our international reputation.

Perhaps Amiri can give us some directions for the future. “New Zealand shouldn’t follow what the Australian government did, because New Zealand is different. We are better than Australia.” We certainly like to think so, don’t we?