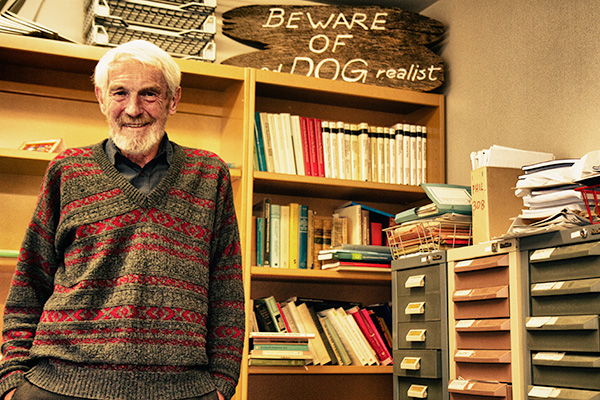 Over 40 years of research and dedication to the University of Otago Philosophy department has paid off for Professor Alan Musgrave after being awarded an Otago University Distinguished Research Medal. The medal is Otago University’s highest research honour. It rewards and recognises outstanding scholarly achievement, including the discovery and dissemination of new knowledge, the development of innovative technology, and the development of concepts that lead to significant advances.

Prof Musgrave has been at Otago since 1970, when he was appointed Head of the Department of Philosophy, and is unsurpassed in the research areas of Epistemology and the Philosophy of Science and Biology.

Prof Musgrave humbly describes his career as “a chapter of accidents, most of them lucky accidents… When you have spent your life somewhere, it is good to know that you’ve not wasted your time.”

He was initially accepted into the London School of Economics to study law, but reassessed this career path when an obstinate man told him that to be a barrister at law, you needed to have a rich father. “I didn’t have a rich father, so I thought, ‘Oh bugger, no point studying law,’” Prof Musgrave reveals.

He then took up a new course, in Philosophy and Economics. Despite not knowing what Philosophy was when he started, Prof Musgrave soon realised his passion for it under the watchful eye of his lecturer, the world-renowned philosopher Sir Karl Popper. He eventually became Popper’s research assistant.

With his career trajectory set towards teaching, Prof Musgrave came across “a Mad Hungarian” who told him “you’re mad, you must do research.” Who was the madder of the two became irrelevant, as soon after a letter arrived awarding Prof Musgrave a PhD scholarship to study Philosophy and Economics at the London School of Economics.

It was Popper who went on to recommended Prof Musgrave for the upcoming position as Head of Philosophy Department at Otago. Popper, who had taught at Canterbury University during World War Two, and was a lecturer and colleague of the Vice-Chancellor, Pro-Vice Chancellor and Dean of Arts at Otago University at the time, suggested Prof Musgrave might be fit for the role, despite being “an absurdly young man” of only 30 years old.

Migrating from the other side of the world with two young children and a wife, Prof Musgrave said he “was welcomed with open arms” into the Department. During his first visit he fell in love with Dunedin. Coming from the British class system, he knew no better than to tip his taxi driver. However, the habitual gesture was ill-received: the taxi driver responded, “I’m not your servant, mate.”

Another incident that emphasised the differences between the two countries occurred when Prof Musgrave spotted a Rolls-Royce coming towards him. On closer inspection, he saw that the back of it had been converted into a sheep truck carrying three ewes. Prof Musgrave was delighted, and thought “what a wonderful country! Nobody is anybody else’s servant, and the farmers have Rolls-Royces to cart about useful sheep instead of useless Lords and Ladies.”

For a man so down-to-earth, yet so incredibly smart, Prof Musgrove is still able to relate to the less philosophically minded. Epistemiology, his area of study may sound intimidating, but as Prof Musgrave explains, “Epistemology is just a fancy name for theory of knowledge. Do we know anything? Are there any things we know for certain?”

As for the future of Philosophy and how much more questioning and thinking that can be done, Prof Musgrave reassured me that there are in fact no limits. “The problems with philosophy are so general that they are not going to go away. They get redefined every generation, and new disciplines arrive – communication studies didn’t exist 50 years ago. I think there will always be new things for philosophers to do.”

This probably explains why Prof Musgrave is yet to retire. The 72-year-old thought of retiring long before 2010. Needless to say, he is still teaching and lecturing. He puts it down to the fact there’s “no compulsory retirement age anymore, so the University has this very nice scheme where by people can retire very gracefully and gently.”

As far as life after death goes, Prof Musgrave “[doesn’t] believe in it. But the people who do, what do they mean? Life of something other than the body after the death of the body, so we consist of bodies and souls, do we?”

Coming from an “irreligious background”, Prof Musgrave’s stance on religion is that “it’s very sad that there’s so much pain and suffering inflicted by one lot of people on other groups of people because of what really are very odd metaphysical beliefs.”

During his years at Otago, Prof Musgrave’s research department has twice been ranked the top research department of any subject in New Zealand. Understandably, cutting all ties to something you have dedicated a huge chunk of your life to and excelled at is not an easy task.

Upon hearing of his retirement, Prof Musgrave’s colleagues wanted to set up a scholarship to commemorate his 40 or so years of service to the department. The scholarship is now up and running, with the first recipient arriving on campus shortly. Donations from friends of the Department and the University have been so generous that the recipient’s Masters course, costing about $35,000 a year, is covered by the interest gained by the fund. “I am indeed proud, and I am pleased that the beneficiaries of it won’t be me but students of philosophy,” says Prof Musgrave. “It will go on forever.”

Not only will his scholarship go on, but so will the books that he has written. Sense, Science and Skepticism was written for a course in Epistemology over 20 years ago: “I couldn’t find a good [textbook], so I wrote one.” It is still being published, and has been translated into multiple languages.

As for where philosophy can take you, some of Prof Musgrave’s students have found themselves in rather prestigious positions. The current professor of political thought at Oxford and the youngest and first female Solicitor-General of an Australian state, who is now a high court judge, are both Graduates of Philosophy at Otago. However, Prof Musgrave advises to “do what interests you. You’ll enjoy it more, and you’ll probably do better at it.”
This article first appeared in Issue 18, 2012.
Posted 2:15pm Sunday 29th July 2012 by Bella Macdonald.