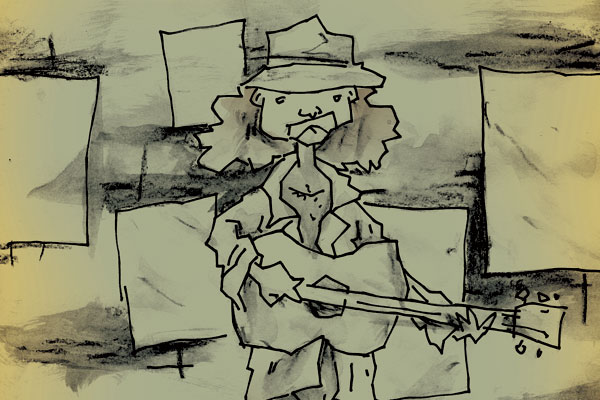 It’s not easy being a musician. An artist. There’s constant pressure – to write new songs, record, release an album, tour (and tour well) and just be an all-round GC. And there’s even more pressure if you’re a musician in New Zealand; the music industry just isn’t that big.

New Zealand Music conjures different images for different people. Think summer beer-drinking: The Black Seeds, Fat Freddy’s Drop, Salmonella Dub, Six60 … blah, blah, dub and roots blah. There’s stuck-in-your-head pop people like Dane Rumble and Midnight Youth; and the transformation of alternative music, from the Mint Chicks through to its absorption into the mainstream and the resulting Naked and Famous. Rock veterans Shihad and The Feelers have been around longer than I have, and let’s not forget Studylink’s playlist from hell: Crowded House, Bic Runga, Don McGlashan, Dave Dobbyn and that song about nature and leaves (“nature, enter me”?? Rude).

But let’s be honest, Nature’s Best and Conscious Roots CDs aside, that’s about it. It’s only recently that hip-hop has emerged considerably – see the bankruptcy and later revival of Dawn Raid Entertainment – and except for a few guys like Scribe, Savage and P-Money, New Zealand hip-hop hasn’t really been out there in the past few years. Then independent hip-hop labels came on the scene, followed closely by Home Brew and David Dallas.

Labels are an important and complicated part of being a musician. There are two main types: Majors and independents (also known as indie). Major labels are the big guys like Sony Entertainment, Warner Music and EMI. Independents are many and varied – NZ’s oldest independent label is Flying Nun Records, and there are countless others. Indie labels can be a bit sneaky though – some claim to be independent but are actually being funded by the big guys behind the scenes. It’s actually these big guys that are partially responsible for that pain-in-the-arse anti-piracy law that got passed last year – by not buying the music they represent, you were making it so much harder for them to buy their second Ferrari, and you know how shitty rich people get when you mess with their stuff.

Musicians also have another choice; to record and release their music themselves. This is especially popular with hip-hop artists: PNC and David Dallas released their albums online for free, cutting out the middle-man entirely. Home Brew have previously released their songs for free through HazBeats and the collective of artists known as Young, Gifted and Broke, and their most recent album debuted at number one last week – the first independent hip-hop record to reach number one in the NZ Charts since Scribe’s Crusader in 2003. For them, “we need to have creative control. And so it only made sense to stay independent. In this day and age you don’t need a major to reach your fans. As long as you have communication with the people you’re sweet.”

And even though it’s about as internationally influential as John Key, there’s a lot to be said for the current state of the NZ music industry. Mike Fabulous from The Black Seeds reckons there is no easier time for musicians to get their music out there, thanks to the super-influential phenomenon that is social media. Home Brew frontman Tom Scott agrees: “It’s healthy. The power is back in the hands of the artists. People find out about things themselves – it’s not shoved down their throats. And they can decide what they want to buy. Without the new model of music in place, we wouldn’t have sold shit.” But just because a few people have heard and like your music, doesn’t mean you’re going to be a superstar. A few Facebook likes and YouTube views isn’t going to pay off your student loan.

But with more artists having power over everything to do with their music comes more control over the costs of being a musician. It is becoming more and more financially viable to make a living as a Kiwi musician. Social media means they can be more self-sufficient, marketing and promoting themselves through Facebook and Twitter. Direct communication with the fans means the fans feel more involved, and suddenly the god-like musician is on their level, sitting behind a computer and updating their status like everyone else. Added to that, you can pretty much do anything via email today, from booking gigs, to setting up interviews, to distributing your music. We’re seeing the evolution of the new, self-sufficient musician – the musician in almost complete control.

So being a musician is all about making choices; who will represent you, whether you want a label and who you want that to be, and most importantly, choices about your music. Do you want to keep making music that matters to you regardless of how it sells? Or do you give up that creative control in favour of cash monies and somewhat temporary “success”? The industry is volatile, especially in New Zealand. With its five-year rises and dips, you might appear and disappear in a matter of months.

Take The Mint Chicks for example. A few years ago, they were huge. They were going from strength to strength, cleaning up at the Tuis and really making a name for themselves. Five years down the track, and they no longer exist in their original form. After them came the emergence of pop with Dane Rumble and Midnight Youth, and then alternative music meshed with the mainstream and begat The Naked and Famous, who dominated last year’s NZMAs. Recently, we’ve seen the reappearance of The Mint Chicks in some of the coolest music to come out of New Zealand in years. Kody Neilson, ex-singer, is the mastermind behind new collaboration Opossum, while his brother Ruban is storming the US with Unknown Mortal Orchestra, recently receiving a Taite Prize for his efforts.

According to Mike Fab, “the music industry is changing almost every day, for the most part … I think Gotye and Kimbra is a good example. It’s certainly all possible. But I think it’s almost easier to make a career in New Zealand than it is in say, London, where there are so many other bands that you’re competing
against for the same amount of exposure or whatever … it can be really difficult.”

It really all depends on how you define musical success. For some, simply making music and having people listen to it is success enough. For others, it’s about the stardom, the groupies, and the money in the bank.

Remember Fast Crew? I bet you didn’t know that one of their main rappers is now the Top 20 sensation playing at a rugby half-time near you – that’s right, the one and only Dane Rumble. But what possessed him to go from fully sweet rapper to not-so-sweet mainstream “superstar”? I doubt he’d be well received in his fancy sunnies if Fast Crew were to make a comeback. His image, his sound – his entire genre – completely changed. And he’s probably enjoyed a little more “success” than he ever would have as one of the dudes from Fast Crew.

Home Brew’s Tom thinks “it depends on what defines success though. Most of the time when New Zealanders ‘make it overseas’ it’s them selling huge numbers of one single that’s a fad for a couple weeks and then they’re forgotten. I dunno if I’d call that success.”

Which brings us to the next generation of Kiwi musicians that are bringing some really exciting things to the industry. Martyn Pepperell, a Wellington-based blogger, music journalist and radio DJ, reckons there’s a whole group of 16-to-18-year-olds making music at the moment that no one really knows about. And even here in Dunedin, there are a whole lot of people going that extra mile to showcase local musicians. Take The Attic for example – this venue on George Street is currently booking some of the best talent Dunedin has to offer. And even some of the industry veterans – Mike Fabulous, Barnaby Weir, Connan Mockasin, Liam Finn, the Neilson brothers … the list goes on – are collaborating on brand new sounds that are guaranteed to cause some nationwide (and maybe even international) accidental pants-creaming.

So maybe “making it big” isn’t the incentive any more. Sure, for some people, it’s not as much about the music as the money and the fame. But as the realisation that creative control is more important than mattering to people who will just as easily drop you for the next new thing has dawned on the burgeoning talent in New Zealand, we’re seeing the birth of a new incentive. As the wise Mike Fab says, “music should be something that you purely do just because it makes your life better – if that’s the main reason you do it, then whether you make it or not, it’s always gonna be there. I’d say, don’t be a fucker and don’t follow silly trends – just keep playing, keep playing and don’t stop.”

Big ups to Tom Tremewan for his essential contribution to the making of this article.
This article first appeared in Issue 12, 2012.
Posted 7:58pm Sunday 20th May 2012 by Lauren Wootton.