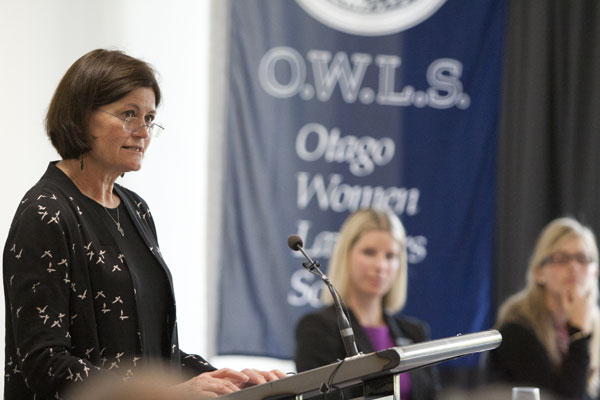 Justice Kate O’Regan was invited to speak at the annual New Zealand Law Foundation Ethel Benjamin Address on April 23. The address is held in memory of Ethel Benjamin, who in 1987, was the first female Otago University graduate admitted to the bar. Justice O’Regan’s experiences as a woman working in the challenging and changing South African legal sector reflects the skills and determination that Ethel Benjamin herself displayed, and which continue to be recognised by the annual Ethel Benjamin scholarship, which honours outstanding New Zealand women law graduates.

In 1994, At the ripe old age of 37, Justice O’Regan was appointed by Nelson Mandela to the first South African Constitutional Court. As the youngest member of the Court, and one of only two females, O’Regan stayed for 15 years and left as one of the most experienced judges on the panel. The advice she gives to anyone working in such a diverse environment is, “develop a thick skin, don’t take offence too easily; and, develop a thin skin and don’t give offence” – a stark dichotomy that she seems to have mastered.

The creation of the Constitutional Court was instigated after South Africa adopted a constitutional democracy following the fall of apartheid. Justice O’Regan explains that the main purpose of the Court was “to limit the power of the legislature and the executive to prevent the unjustifiable nature of human rights [abuses] and the unlawful use of power.”

Apartheid in South Africa was legalised racial segregation, enforced by the National Party Government, which was in power from 1948-1994. The rights of non-whites in South Africa were severely limited during this period, as white supremacy and Afrikaner minority rule was upheld. Legislation written after the 1948 elections classed inhabitants into four racial groups: White, Native, Coloured and Asian. This led to residential areas, educational facilities, beaches, restaurants, cafes and sports teams being segregated, with Blacks having inferior access. In 1970, all non-white political representation was abolished which resulted in Blacks being denied their citizenship and being forced to assign themselves to one of ten self-governed homelands created by the government.

Living in South Africa during apartheid posed many struggles. However as Justice O’Regan notes, these were “often invisible to white South Africans.” She recalls a time when she was working with a Black colleague and they simply wanted to get a sandwich together in Pretoria. “All sandwich bars in the Pretoria City Centre were for whites only, and we could not even share a bench in the city park in Church Square. We ended up with me buying sandwiches at a take-out and eating them in the car in the underground parking garage!”

These harsh racial stances created enormous conflict and were condemned by many countries. New Zealand became involved when the South African rugby team was touring New Zealand. Prior to the 1981 tour, All Blacks team selection kowtowed to apartheid policies when travelling to South Africa, as “coloured” Maori players were excluded from the team. Protests such as the “No Maori, No Tour” campaign were initiated due to disgust over New Zealand’s co-operation with the apartheid regime.

When the Springbok tour of 1981 was given the go-ahead by the New Zealand Rugby Union, many called for Prime Minister Robert Muldoon to step in and cancel it under the Gleneagles Agreement (a Commonwealth agreement that discouraged sporting contact with South Africa). However, Muldoon stood by the Union’s position of “no politics in sport.” Riots and protests ensued; two tests were cancelled, and protesters went so far as to drop flour bombs from a plane during the final test in Auckland.

Justice O’Regan had been visiting New Zealand just before the tour had started: “I spent a lot of time arguing about it because they all thought I was South African and assumed I would support the tour. They were horrified when they found out that I didn’t,” she recalls. “My own sense was that it was not appropriate for the team selected, that came from a country that was committed to racial discrimination, to be accepted into an international community.”

Apartheid policies in South Africa’s government and judiciary have all but disappeared since the 1990s, although racial and gender discrimination still exists. The Constitutional Court consists of 11 judges. In the first Court, four judges were Black and two were female; today, seven are Black and two female. A motion to increase the number of Blacks and women in the judicial system has occurred (Blacks make up around 80% of South Africa’s total population); however, the judiciary has to contend with a small selection pool for these groups, with only 17.5% of the total pool Black and less than 20% female.

As for finding the balance in society outside the courts, Justice O’Regan says that there is still a considerable level of poverty and continuing racism: “The reality of poverty and disadvantage persists for Black South Africans, and is really deep. We have not been successful in eradicating that. Statistically, your racial category is an accurate predictor of your education level, your wealth and your longevity, which is really depressing.”

Not only has South Africa had a difficult history of racial discrimination, it has also faced ongoing issues around sexual equality. The University of Cape Town’s (UCT) first female law graduate, Frances Schreiner, graduated in 1914. “Schreiner evinced extraordinarily bad timing as she graduated just after the Appellate Division had decided that women were not eligible to be admitted as attorneys,” says Justice O’Regan. “The issue of the case was whether women constituted ‘persons’ as provided for in the legislation that governed the admission of attorneys.”

Although the legislature intervened in 1923 to allow women to be admitted to the bar, this saw only a slow increase in female lawyers. In the 1930s, only seven women graduated from UCT with a law degree. It wasn’t until the 1970s that women started to graduate in any serious numbers – over one hundred years after law was first offered as a subject at UCT.

Since finishing her 15-year term in the Constitutional Court, Justice O’Regan has taken up various other part-time jobs, including positions as Honorary Professor at UCT, visiting professor at Oxford University, and Chair of United Nations Internal Justice System. She is currently the top Judge of the Namibia Supreme Court. Having also raised two children, who are now in their early twenties, she seems the epitome a successful and well-balanced woman.

Otago Women’s Law Society Convenor, Allie Cunninghame, has nothing but praise for O’Regan. “Her championing of Black rights would have made her very unpopular in the time of apartheid and yet she advocated on behalf of the marginalised, which she continues to do today. Someone like Justice O’Regan reminds us that it is possible to achieve at the highest professional level, without sacrificing one’s family obligations.”

As for planning this extraordinary career, Justice O’Regan admits, “it was entirely bizarre.” She had planned on studying journalism – “I wanted to use my skills in a way that would assist the process of the struggle against apartheid” – and had heard law was good training. However, once she got stuck into law, she realised it was for her. Justice O’Regan is full of encouraging advice based on her experiences as student. “I always say build a big foundation, do lots of things which will deepen your knowledge, understanding and skill levels, then look closely at the opportunities that arise.”
This article first appeared in Issue 12, 2012.
Posted 7:58pm Sunday 20th May 2012 by Bella Macdonald.