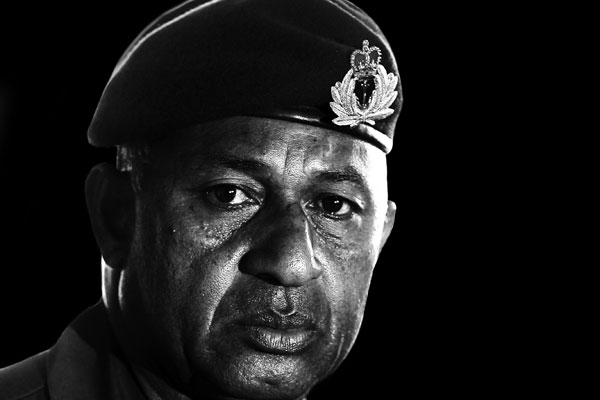 I’m sure for most of you, Fiji inspires romantic images of pure white sand beaches laden with coconut trees. Crystal clear waters leading out to mesmerizing sunsets glistening over the Pacific. Ah, Fiji: The pinnacle of tranquility – slightly different to your average Castle Street flat.

But is this the real Fiji? For the typical tourist, who jets in, jumps on a boat and cruises out to one of the many surrounding resort islands, this is the island of your dreams. But for those living on the mainland, especially around the political hotspot of Suva, life is a lot different.

I’m not sure how many of you follow Fijian politics (probably not a lot) but if there is one word to sum it up, it would be crazy. Jeff Hampton, a TV reporter for 3 News, lived in Fiji for three years in the 1990s: “The politics over there is really complicated. There’s racial politics, tribal politics, provincial politics, all working for and against each other.”

In the last 25 years there have been four coups d’état, and in the last six years Fiji has been under the iron thumb of Commodore Frank Bainimarama’s dictatorship. Since seizing power in 2006 he has completely censored the media, revoked the constitution, created emergency powers (which give him the ability to control everything) and put a member of the military in almost all positions of power in his government.

While the regime is not responsible for anywhere near the levels of violent repression we see in other dictatorships around the world, there is a sense of fear in the general population, and people are certainly scared of voicing any dissent. Bainimarama claims that what he is doing is necessary to put Fiji on the “path to democracy”, however the question is whether he is going the right way about it.

“At the beginning I hated what he was doing. Using the army to threaten his own people – beating up your own people is a bad way to go about it,” says Fijian Otago University student Isireli Savo Guise. Says another Fijian student, “Being here is alright for me, because I am getting an education, but I don’t know how it is for my family back home, how they are dealing with the situation,”

However there are also Fijians who look past the obvious flaws in Bainimarama’s regime, to focus on the political history of Fiji. Eric Nabalagi, a Fijian working at the Pacific Island Centre, believes “He’s [Bainimarama] trying to move forward, he’s a good guy. If you meet him in person, he’s a good guy. But the way the media talks about him: Dictator, evil, and a murderer – I don’t think so. He’s trying really put Fiji back to stability.”to put Fiji back to stability.”

It is difficult to gauge exactly what is going on in Fiji, as the local media is heavily censored, and foreign media have been almost entirely kicked out. On top of this, various blogs and websites such as “CoupFourAndAHalf” spread wild rumours ranging from heavy corruption through to murder by the regime. Without any rule of law in Fiji there is now way of knowing who is telling the truth. So the question has to be asked, are Bainimarama and his regime really as bad as they are made out to be?

Fiji is regarded as the most politically developed of the Pacific Island nations. However, ever since Fiji became independent in 1970, the political system has never been stable. Professor Jacqui Lackie, head of the Anthropology Department here at Otago University, believes that “one of the big problems is the history of Fiji, the way the colonial regime structured the economy and the polity, and not just that, but social divides as well.”

The British played a large role in dividing society prior to independence by creating an “elite class” and keeping indigenous and Indo-Fijians separate. “There are many parts of Fiji, I think, that feel that they have had a really raw deal, that feel they have been neglected by the colonial government, and also after independence in 1970,” reflects Lackie. Throw into this mix a weak parliamentary system and high levels of corruption and you have the perfect formula for the political unrest that has become synonymous with Fiji in the last few decades.

The first two coups d’etat occurred in 1987 when a group of disgruntled Fijians overthrew the Labour-led government. The Prime Minister at the time, Timoci Bavadra had created a coalition with the hugely powerful Indo-Fijian-dominated National Federation Party. Many in the ethnic Fijian population felt that the new government did not represent them, and when land reform attempts led many to believe that land would be taken from ethnic Fijians, the military overthrew Bavadra’s government (the first coup) and disestablished the Fijian monarchy (the second coup).

The next coup occurred in 2000 after an Indo-Fijian, Mahendra Chaudhry, was elected Prime Minister. Businessman George Speight led this coup and again tapped into the racial divides in Fiji at the time, gaining many indigenous Fijian sympathisers. This coup was by far the most violent and bloody, resulting in the deaths of three soldiers, and five further deaths in retaliation.

Jeff Hampton was in Fiji at the time covering the coup, “The Speight coup was pretty violent and out of control. They rampaged around and smashed up the TV station … They trashed a lot of the town.” Speight and his supporters stormed the Parliament buildings on 19 May 2000, and took Prime Minister Chaudhry and the Cabinet hostage for 56 days. The crisis ended in July, when Commodore Frank Bainimarama stepped up to the plate and named Laisenia Qarase Prime Minister, who would go on to lead Fiji until the next coup in 2006, led by Bainimarama himself.

The recent trouble in Fiji began in on 4 December in 2006, when Commodore Bainimarama led the “coup to end all coups”, with the support of the entire military. Hampton recalls: “It was more organized and controlled, and there was plenty of warning that it was coming”. At the root of the problem was a conflict between the government and the military. Bainimarama had warned the government that if they passed legislation pardoning the perpetrators of the 2000 coup, he himself would overthrow them.

On 6 December, Bainimarama proclaimed that the military had taken control and that Parliament had been dissolved. He cited “bribery, corruption and the introduction of a controversial bill” as the primary motivations for the coup. He then went on to state, “We trust that the new government will lead us into peace and prosperity and mend the ever widening racial divide that currently besets our multicultural nation.” However, six years on Fiji is still waiting for those elections.

While the coup was relatively non-violent, the military quashed any voices of dissent, and quickly built up an atmosphere of fear to reinforce their position in power. “They became very anti-democratic very quickly,” says Hampton. “They smashed up houses that flew opposition slogans, and intimidated the people – beat them up, took them up to the barracks and gave them the bash. We’ve got video footage of what they did to a place called ‘Democracy House’, and the lady who owned the house got tortured.” These random beatings and suppression of opposition voices created a level of fear in the general population.

At a time when dictators are dropping like flies all over the globe, Frank Bainimarama’s iron grip on Fiji is looking as strong as ever. So what is his secret?

Jeff Hampton recalls just prior to the 2006 coup seeing Bainimarama cruising the streets of Suva, standing out the back of his souped-up Mitsubishi convertible like some sort of celebrity. Then at the end of last year Bainimarama ordered two official inquiries into a text poll for Fiji’s “Personality of the Year”, which it was proposed he lost. In 2011, KFC decided to pack up their three stores and leave Fiji, claiming they were forced to either hand over their secret recipe, or leave the country.

Bainimarama also had “monitors” installed in all of the news stations and many of the journalists were threatened for reporting stories critical of the regime. Many of the news services were shut down for breaching these controls, while some continued in passive protest. Fiji’s Daily Post reverted to simpler forms of journalism, printing articles such as “Man Gets on Bus” and “Breakfast as usual”, about the various breakfast choices of the news team. While these may seem exciting to readers of the Otago Daily Times, they are not of the quality desired in a country as politically volatile as Fiji.

“Uncle Sam” of the South Pacific

New Zealand and Fiji have always had a very close relationship. However in recent years New Zealand has shown Bainimarama’s Fiji the cold shoulder. Acting like our somewhat more powerful allies, the United States, New Zealand has been putting the pressure on Bainimarama to revert back to democracy as soon as possible. Without the military threat of the real “Uncle Sam”, the New Zealand government has had to settle for “travel sanctions”, which prevent people linked to the regime from entering the country. Nonetheless, New Zealand development aid today hovers around $20 million annually, and this has not diminished since Bainimarama’s takeover.

While the travel sanctions have definitely affected Fiji’s economy Bainimarama, instead of being pushed to New Zealand’s whims, has turned his attention to the world’s big players. Top Chinese and Russian officials have recently visited Fiji, and Bainimarama has boasted of a $200 million “soft loan” from China for construction efforts. Sensing a move on their territory, America has also re-engaged with Fiji, and last year they opened the largest American embassy in the region. Looking slightly red in the face, New Zealand Foreign Minister Murray McCully is now looking to resume contact with Fiji.

Back to the Fiji of our Dreams?

Given developments in Fiji so far this year, the future for Fiji may be bright after all. In January, Bainimarama lifted emergency and media censorship laws and announced plans for a new constitution and elections in 2014. While many will take these announcements with a large grain of salt, there is reason to be hopeful. Foreign Minister McCully regards them as a “real step in the right direction” and has stated that New Zealand will relax the travel sanctions if there are clear indications that Bainimarama will keep his word.

Fijians themselves are a bit more cautious. “When he first came into power we were all happy with all those plans, like removing corruption, and making things better for everyone. But he’s been in power for so long and promised so many things, and we are still wondering, are we even going to have elections in 2014?” says one Fijian student. “I am hoping we have a better future in Fiji, especially for the young people, and I hope that we go back to democracy,” says Nabalagi. It seems everybody is hoping, except for the one man who has the power to change it all, Frank Bainimarama.
This article first appeared in Issue 6, 2012.
Posted 7:07pm Sunday 1st April 2012 by Michael Neilson.