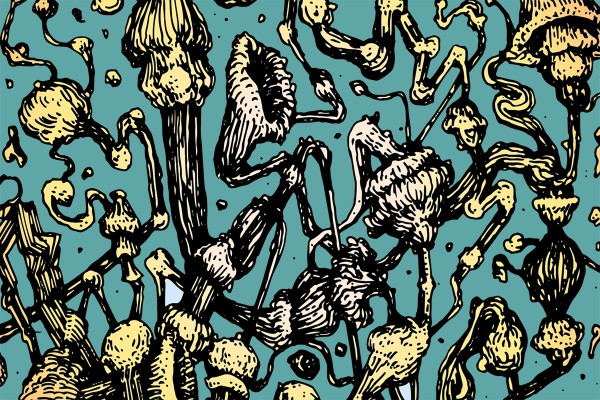 The Art of Science

James Croft-Bennett is an arachnologist based in the Botany Department here at Otago, because spiders love plants and James loves both. Last year, James participated in Wild Talks Dunedin, and was given seven minutes to talk about what happens when art and science meet. James used his photography skills to humanise spiders - a group of animals traditionally vilified by people everywhere.

“Photography not only captures direct form but can also catch emotional state,” said James. “It helps to humanise that which we don’t understand.” James told us that lots of people have an inherent bias against our eight-legged friends, and see them as “single minded, cannibalistic automatons”, much in the way we view lawyers, except the bias against spiders isn’t entirely deserved. James said that “Science has fed the hysteria that spiders are quick to bite and often without warning,” and clarified that “This is not true. If you annoy a spider, or a wasp, or any other invertebrate that can defend itself, they will let you know you are scaring them, if you take the time to read their body language.”

James’s photography is a way of communicating the body language of these invertebrates, showing us what we might not see without squinting our eyes. He opened his presentation with a “shot of a giant female Uliodon albopunctatus covering her recently exposed eggsac before flashing the classic attack pose spiders are famous for: the classic front legs raised, fangs exposed… communicating that she is ready to throw hands.” James said that “by communicating the context of child endangerment and maternal protection I hope I was communicating the scientific desire to protect progeny that humans like to take a lot of credit for.”

“Art is very important in the biological sciences, everything’s so exceptionally complex in form and scientists are already known for being terrible at communication as it is, so being able to visually represent form is super helpful,” said James. “That extends past scientific drawings and photography of animals (or natural phenomena of any kind really) [and it] helps bridge the splintered world of science and the ignorant but willing world of everyone else.”

TJ plays a handful of instruments, and he lives in the 660 flat, so he must know what he’s talking about when it comes to music. He also studies physio, so he has an appreciation of science. TJ told Critic Te Arohi that while art and science may seem separate, they can end up working towards the same goal. In TJ’s case, that goal is healing. “Music and healing are synonymous”, he said, and his “goal as a physio is to take everything I've learned about healing and put it into music. I feel lucky to be connected to both [art and science].”

Kenny just finished his third year of medical study at Otago. He was doing the honours programme, but dropped out because “it didn’t work out”. He then decided to become “almost a full-time lab demonstrator” in the dissection lab, which he said “is a privilege and an important part of becoming a doctor”. When he was younger he wanted to be an artist, and was fascinated by Da Vinci’s anatomical sketches. He said that art is important to anatomy for a few reasons, one of which is memory.

“It’s a lot to learn in medicine, so diagrams and illustrations can help,” said Kenny. “Diagrams can reinforce the memory of structures” better than typed notes. “A picture’s worth a thousand words, especially in anatomy.” But because “art takes time to do, and medical students don't have a lot of time,” Kenny said that simple diagrams are good enough to learn the concepts without going full Da Vinci. But he goes full Da Vinci, because he loves it.

“Being doctors, it's a different type of art, the art of human connection,” said Kenny. When it comes to surgery, “it's a very detailed procedure, like making a sculpture. You look under the microscope and say “wow, that's very impressive”, just like art. But you can't make mistakes, like you could with a sculpture. With a scalpel, you can't make mistakes.” Making mistakes is part of what makes an artist a better artist, but surgeons don’t have that luxury. With real, living patients on the table, perfection is everything.

If artists were held to the same standards of perfection, if sculptors weren’t allowed to make mistakes, Kenny said “their creativity would be severely limited.” He said that “In art, you can afford to make mistakes. Any mistakes, it’s free to your form. But not a single mistake in surgery.” When he expressed interest in art, “People suggested ‘why don’t I just do an art degree’ if I wanted to become an artist,” said Kenny. The answer was simple. Kenny chose to study medicine over art because “you don’t need to do an art degree to do art. You need a medical degree to practise medicine.”

TJ’s been walking the line between art and science for about as long as he could walk. He was four years old when he committed Micheal Jackson’s songs and dance to memory, and a few years later, he saw his musical fascination blend with the world of science. “In year two primary, we played with that stuff that gets hard when you whack it - oobleck, I think it’s called. Anyway, the teacher had this giant subwoofer and we put the oobleck on a white sheet over it, and you could change how the oobleck moved based on the frequency coming out of the subwoofer.” TJ said that as a kid, this blew his mind. “That was my first visual representation of sound, and as an artist, being able to visually represent your sound is so important - like how Billie Eilish describes wanting a song to sound ‘dark’ or ‘black’, even going further and making music videos and things, you can transform these musical frequencies into something more universally accessible. And that's all through science.”

He said that music, at its core, was a scientific venture. “I’m well aware that some genius somewhere out there had to do all the maths just to make sure that my piano will play in F… Things like the piano and drums, it’s all physics. They're all made and tuned using physics, choosing the type of wood, all that comes from physics. It all comes from sound dynamics.”
“Through science we have EQ,” which TJ said was one of the most important tools in a musician’s belt. EQ (equalisation) “means I can get a horribly sounding audio and through manipulating the frequencies, and boosting and filtering, I can make something sound good, which is what mixing is, which is what makes every rough demo sound like a top hit single. I just really want to emphasise how important EQ is.” EQ lets artists tailor their sound to their tastes, and it’s all science. And speaking of taste in music, TJ pointed out one major difference between arts and science: being able to back up your claims with data.

“I won't lie, they do require two different brains. Physio requires such a practical way of thinking, very in the box, whereas there’s no stats in music. In science you can back things up with data. Like if I say ‘the earth is flat’, someone can say ‘no it's not, here's the proof’. But if I say this Drake song is the worst (or the best) in the world, you can't disprove that, it’s opinions.”

Art and science are different things. They require different brains, but they ultimately make each other stronger, and being well-versed in both makes you better at either field. But they’re not the same. They work together, with art working to communicate science and science working to facilitate art, but TJ outlined the difference most clearly.