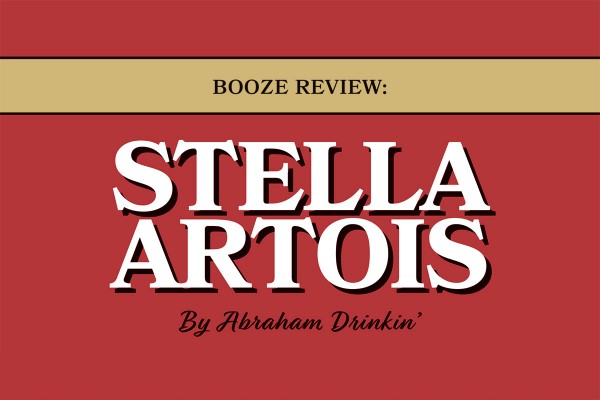 Do you believe that taxation is literally theft? Do you find yourself retching in disgust as you walk past commoners drinking boxes of Flame? Does Maggie Thatcher’s steely gaze awaken something deep within?

Stella Artois is perfect for showing your lower class friends you aren’t out of touch. You drink beer just like them. Yes, Daddy may have paid for it. And yes, you really would prefer a nice bottle of Mumm or Möet. But with a bottle of beer, your snobbish leering will be harder to spot. If you’re lucky, you may even be able to trap one of the less observant partygoers in a conversation about “this bloody Labour government” and your property portfolio for a good half-hour.

Stella’s design is impeccable. Unlike craft beer at a similar price point, Stella doesn’t need to cover herself in over the top bullshit to capture your attention. She can do better than the “bro check out my ManGo StrAWbeRry sOUR WaTerMelon HAZy IPA” neckbeard crowd. She is elegant, understated, beautiful. She deserves only the best. The paper collar wrapped around her neck and cap not only protects her from the gaze of those below her, but it can also be nonchalantly discarded on the floor of the flat you’re at. It won’t be a problem — it's good to make sure the help has something to do.

Anno 1366 is boldly printed on the label to let you know Stella is no new-money beer (yuck). She's only interested in those with dusty dollars. She's older than feudalism, a beer from the good old days when one could beat their serfs for slacking off and hang them for organising a strike. Like your other boomer investor pals, simply refuse to do even a simple Google search and remain blissfully ignorant of the fact that in reality Stella was first manufactured in 1926.

In between functioning as a wartime speed bump, those Belgians have certainly managed to master the art of brewing. Stella can only be described as perfect. One cannot fault this beer in any way. Not overly hoppy, yet fully flavoured. The fizz is masterfully balanced so she may be savoured as easily as she can be deleted, just in case you need to show everyone you were the hardest kid at Auckland Grammar. She is a beer fit for a Herne Bay King.

At $27 a box, one has to be a king to afford a box of this liquid nectar. Even the most lavish may raise an eyebrow. But with an unshakeable belief in trickle-down economics, one can quite easily write this off on the company as a charitable donation. As a bonus, the relatively high price ensures the riff raff cannot get their grubby little mitts on it, keeping you safe from being accidentally thought to be one of them. Every so often, the commies at New World will drop it to $21. At these times, it’s best avoided so as to maintain your image.

After too many, one may begin to have some very strange thoughts such as “is it right that only a few will ever experience such ecstasy?” Quickly push these foolish ideas aside. If the plebeians wanted to drink nice beer, they simply wouldn’t have chosen to be poor.

All in all, Stella is a drop of pure excellence. Simply possessing a box will make you the smartest, sexiest, and douchiest person in the room. So, when Daddy buys you the wrong colour iPhone or refuses to replace the Golf GTI you totalled, calm down with a refreshing Stella and remember: you are better than everyone else.