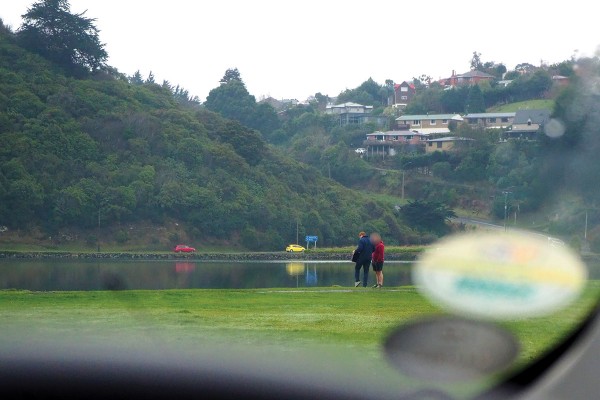 GUEST EDITORIAL: I spent six months undercover in a neo-Nazi group and it was not fun

The only funny moment throughout this investigation was on a hike undercover, when three members of Action Zealandia were captivated by an impressive rainbow stretched out across the Wellington skyline. They insisted that, because it had seven colours rather than six, it was “God’s rainbow” rather than “a gay rainbow”. The rest of the experience was decidedly less funny.

In this week’s issue we have two pieces that are the result of six months undercover in Action Zealandia, a neo-Nazi group with members across Aotearoa. For the investigation, I met with six different members of Action Zealandia, had voice calls with two leaders, and was in their online chats for most of this year, all while maintaining a secret identity. Pretending to be someone you’re not, particularly someone who is hateful and stands for so many things you vehemently oppose, is not something I’d recommend anyone try.

Action Zealandia have been in the news quite a bit in the last two years, but our piece uncovers new information. Here are some of the key points:

Their members are mostly incompetent, but the group is nonetheless dangerous to society. Despite their horrific beliefs and harmful actions, it is important to remember that members of Action Zealandia, or white supremacists, Nazis, and far-right extremists in general, are not ‘monsters’. They are human. I do not say this to inspire sympathy, but to avoid falling into the comforting trap of creating a level of separation between ‘us’ and ‘them’, between society and its hateful fringes.

This kind of idealism swept Aotearoa after the 2019 Christchurch mosque attacks, when many people added a frame saying “This Is Not Us” to their profile pictures. That phrase comes from a place of genuine compassion, but it also allows us to believe that the shooter was an aberration, rather than a product of the world around us, and the discourse within it. The same is true of our perception of Action Zealandia. If we write them off as monsters, we risk blinding ourselves to the people around us following similar paths. None of us want to believe that our friends or family are monsters. So when we hear our loved ones say something that is casually racist or sexist — maybe if they crack a transphobic joke, or start having really intense conversations about ‘globalists’ — we don't feel the need to worry too much.

We know that we live our life doing things with good intentions, but it is clear, after six months of talking to them, that many Action Zealandia members believe the same thing. We believe that we wouldn’t make a mistake in choosing our friends. The thought “I wouldn’t be friends with a neo-Nazi” unconsciously becomes “none of friends are neo-Nazis” or even “none of my friends are problematic in any way.” But as history tells us, there isn’t a solid black and white line between “normal person in society” and “total Nazi”. Once we acknowledge that, we can see how dangerous white supremacist ideas can seep into the mainstream and become a torrent.

The rise of the far-right often doesn’t seem like as big of a deal in Aotearoa as it is in other countries. But in the same way that Covid-19 can sometimes seem like less of a big deal here, the only reason that is possible is because of the massive efforts of many people to mitigate the worst-case scenarios. Those worst-case scenarios are always possible though, and they’re dangerous.

We know from the past that extremist individuals and groups with ideologies that seem almost implausibly hateful can and do take power. We don’t learn as much from history as we should. This means that we have to remain vigilant to prevent hate from gaining power, but it also means that real radical positive change is within the realm of possibility, we just have to work for it.

Read the news and feature articles for more info on Action Zealandia.