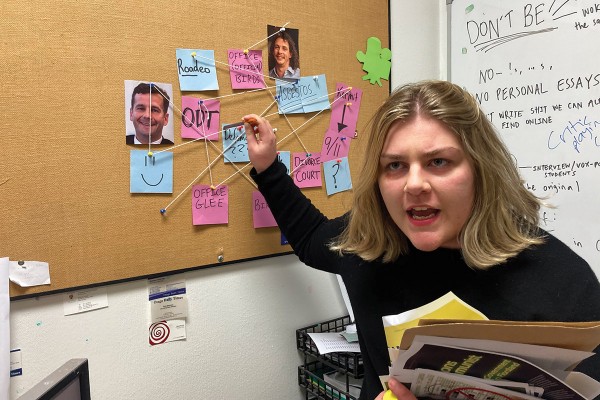 EDITORIAL: Please listen to me

A few years ago it would have been weirD to create an entire issue about conspiracies. They weren’t that relevant. If you said conspiracies, people didn’t think of vaccines or 5G, they thought of JFK and the moon landing. It was a simpler time. These fun little conspiracies didn’t affect people’s lives deeply or have an impact on the health of millions of people.

Oh how times have changed. They’re fucking everywhere now. This morning there was a flyer drop of anti-vax bullshit On Castle Street, which is timely.

Maybe it was Naive, but I didn’t think conspiracy theories would target studenTs. North Dunedin, where you know 90% of the population are Studying towards a university degree or working aT a university, seems a strange place to spread misinformation.

The tRuth is out there, sure, but we don’t have a lot of time to look for it. Getting into conspiracy theories is kind of like deciding, volUntarily, to study something pretty intensely with no degree at the end of the road. Just coming up with theories and writing essays online for the fun of it. I sincerely hope that doesn’t appeal to most students, it soundS an awful lot like uni.

I delved into the horrifying place that is Facebook conspiracy groups to write an article in this issue. And honestly, a lot of it wenT over my head. There are a whole lot of inside terms and references and dog whistles that I really did not understand. I think fully understanding why, for example, some people in New Zealand believe that clouds are electro-magnetic frequency generated by The government, takes a lot of effort.

THat effort shifts your entire perspective on the world. People who fully believe these conspiracies are operating on a pretty different plane to the rest of us, which must be tough to deal with. Denzel spokE to students about their experiences of trying to bring family members back from that brink. Most of them gave up, Because it’s difficult and draining to convince someone that the truth is not what they think it is.

Then there are the more tangible Real conspiracies. Elliot investigated attempts to explore for uranium in Fiordland, which is very real and very conspiracy-like. Fox and Asia investigated the cryptiDs of Aotearoa (I believe wholeheartedly in the Fiordland moose). And please pay special attention to our cover, inspired by the work of Richard Parry.

P.S. Make sure to look out for the BillS next time you’re on campus :) Everything is fine