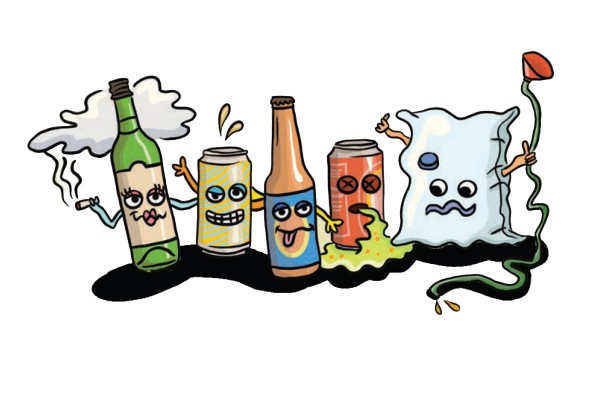 Rodenbach caused Black Friday levels of sensation at Centre City New World when they were put on sale for $1.99 for a six-pack. Ahead of the curve, I managed to grab 48 cans ($16 worth) before the masses swept the rest away. This turned out to be one of the worst decisions of my life.

In my zeal over the outrageous 33 cents a standard ratio, I missed one key fact: Rodenbachs taste like unadulterated shit.

The first night I tried them, I threw them back up in the bushes outside of my flat. After that I gave away as many as I could to unsuspecting people that visited the flat. But a sizeable chunk still remained.

As the days went by, I forgot the ordeal I had suffered and the awful taste. So it came to be that on a slow Monday night of the mid-sem break, abandoned by all but one of my flat mates and desperately low on funds, I gave them another go. We decided to watch the old Space Jam movie, which is fucking fantastic by the way, and sip at some Rodenbachs. We put them in the freezer to minimise the taste and pinched our noses when drinking them, but the taste was still unbearable. By the time Michael Jordan was doing his epic stretch-arm dunk, I had only made it through half a can.

Rodenbachs are referred to on the can as a “Belgian Ale” but, whatever that means, they definitely do not taste like beer. There is a nasty sour taste that comes with every sip that is not balanced by anything else in the drink. It’s like someone removed the nasty aftertaste of wine goon, mashed it together with old AA batteries, and decided that aging this liquid in oak barrels would redeem the taste.

I have always thought that if the best things in life were free, the closer you can get to free, the better things get. At 33 cents a standard, Rodenbachs are certainly close to free. That did not make them good. Rodenbachs have taught me a hard-earned but valuable lesson about the place of dollars per standards in assessing a drink.

Dollars per standards are a useful way to compare drinks of roughly the same type or quality. It does not work for Rodenbach. Rodenbach can not be called beer, wine, or cider. It is a drink in its own unique category of awfulness, and it can not be compared to other drinks outside of its category. The dollars per standard were great. But when someone fucks a drink up as badly as they have Rodenbachs, they should be paying you to drink the shit.

Tasting notes: metallic, that nasty grease that forms on your rangehood

Froth level: doing a deal with the devil with some bullshit hidden catch