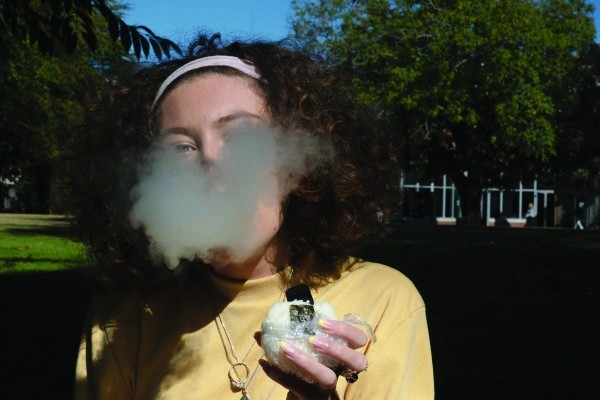 Honestly, the biggest cultural reset occurred in 2013 when Yung Lean dropped the videos for his two singles, ‘oreomilkshake’ and ‘Ginseng Strip 2002’. This fucking kid comes onto the scene, bucket hat and all, and drops the chillest of trap beats. His videos were surrounded by floating 3D smiley faces, Arizona ice tea, and vaporwave iconography, and it was beautiful. I was a huge slut for vaporwave when I was 14, mainly because I was an impressionable teen that wanted boys with a superiority complex to release that I “wasn’t like the other girls”. To be honest, it helped shape me into who I am today, and partially why I chose this week's vape juice. The absolute legend who works at The Vape Store (I’m sorry I can’t remember your name but you’re the best) said that I could choose any flavours for the upcoming reviews. There were so many different strengths, flavours, colours, combinations, and I was very overwhelmed. Until I saw this fucking beast. A giant bottle of a juice brand called “Sadboys E-Liquid”, with branding that looked like it was on a 2012 “grunge” Tumblr account called “normal people scare me” or some shit. Kinda cringe bro. But I was intrigued. They were playing to the archetype of what people believe vaping culture to be, and I wanted to know more.

The Butter Cookie flavour came at the recommendation of the Vape Shop worker, who described it as sweet, but not super overpowering. It’s a freebase juice, meaning there's no nic salts and it’s only 6% nicotine. I was apprehensive to try this flavour, mainly because the idea of a “butter cookie” sounds too sickly sweet for me.

I yelled after taking my first hit. At first, it tastes like an Anzac biscuit with a creamy and rich flavour. But right at the very end, a hint of not too tangy lemon comes in and fucks you up.  Combined with the preexisting flavour of a biscuit base, it tastes like you’re fucking vaping a cheesecake. The nicotine content isn’t super high, but who cares. I found myself vaping this more because I like the taste rather than needing a headrush. Critic photographer Aiman’s reaction to the flavour was “DAYUUUUUUM” after his first hit, while a friend just sat there and said “holy fuck thats good”. However, I feel like after a while this flavour may become a bit too much. While it’s fucking delicious, it’s quite a niche flavour that requires specific moods, rather than an ambiguous fruit. But even with this in mind, I can’t stop vaping it. My mouth wants more of that sweet yet tangy goodness. I want this on an IV drip streaming directly into my blood flow.

Honestly, you gotta try this flavour. The big bottle may be a little bit too much, but otherwise this shit is fucking bomb. It’s flavours like this that make me want to not quit vaping. Although the idea of having vape juice from a brand called “sadboys” is cringe, this flavour is worth it. There’s surely some deeper metaphor of not judging a juice by it’s labelling, but this isn’t a first year English paper. Fuck going out and waiting for a Pam’s cheesecake to be on special, get this juice. Have your cake and vape it too.

Tasting notes: A lemon meringue pie your nana made for Christmas.

Makes you feel: Like a warm hug has hit your lungs.

Pairs well with: A longing for your childhood.