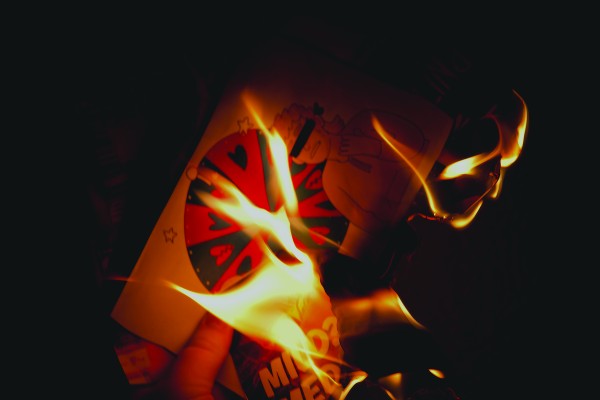 From this week onward, there will be no more Critic Blind Date.

I know. You’re all going to be fucking gutted. In a way, so am I – no editor relishes cutting institutions from the magazine. But this had to be done.

Critic cannot 100 percent guarantee your safety on the blind date, and I cannot in good faith keep facilitating it.

If you know someone who has been on a Blind Date this year, do not assume that the following is about them. Do not harass them. We run multiple dates in the same week.

The Blind Date has been on a rollercoaster journey the past several years. Critic rarely speaks about this, and never in Critic magazine itself, but in 2016, someone alleged that they were sexually assaulted by their Blind Date. I use the word alleged for legal reasons, as it did not go through the courts.

In the 2010s, participants on the Blind Date frequently submitted write-ups that ranked and shamed their partners’ bodies and skills in bed. They were sexist, and Critic, ashamed, would edit these write-ups to tone them down.

2017 Editor Lucy Hunter and her team decided enough was enough. They were sick of receiving “write-ups from piece of shit guys”, not to mention write-ups where “some parties didn’t even remember” the dates.

She considered cutting it all together but, because it was so popular, she couldn’t bring herself to do it. She instead reformed it from the free-for-all $100 bar tab a mandatory meal and a maximum of three drinks each. Bar staff were always in the know, too, and were on standby to ensure the dates went home safely, or could leave the date without harassment. Each participant got the cell phone numbers of two staff members, Campus Watch, and received a pointed explanation of what consent was. They made these changes before they were even told about the 2016 assault, according to Lucy.

In 2018, these procedures remained intact; 2018 Editor Joel MacManus said they would “Facebook stalk” applicants and “ignore dick applications”. In 2019, under Charlie O'Mannin, the drink limit dropped from three to one. Both Joel and Charlie agreed with Lucy that the column should be cut.

“It was a ticking timebomb,” said Joel. He said every week when they received the write-ups, he would read it, and then think “thank God” nothing happened.

When I applied to become Editor, I wanted to cut Blind Date, too, because I knew of its darkest story.

But I was just as much of a coward as Charlie, Joel and Lucy. Blind Date is popular and I didn’t – still don’t - want to be responsible for a decline in Critic readership, even if it is at an all-time high of 95% of students.

I reformed it further. This year it has been running in the middle of the day, no longer in a bar. We turned it into a game show – a game master was present throughout the whole thing, there was a wheel of fortune, the works.

Despite these changes, it quickly became clear that you can change the location and the rules of the date, but you can’t change the culture. Participants would turn up drunk, or bring drinks with them. Most participants expected to have sex.

Recently, we received a write-up that did not describe an assault, but a line was crossed and a boundary was pushed, and pushed, and pushed. If someone says no, it fucking means no. If you shame and guilt someone who says no (even if they said yes to begin with – people are allowed to change their minds) that is called coercion, and you are a piece of shit.

But this person is not just one bad apple ruining it for the bunch of you; Critic has been dealing with these cunts for years.

This person could be anyone. We have no consent curriculum in New Zealand. People out there genuinely do not understand that you can’t consent if you are black out drunk, or that people can say yes and then change their mind, or that just because you went on a date doesn’t mean you’re guaranteed sex. Boundaries get crossed every day, on thousands of dates that Critic is not involved in. This will happen long after this column ends. But if I cannot guarantee your safety, then I can’t in good faith facilitate one more date.

I know this sucks. Blind Date is a decades-old Critic institution. We love reading our friends embarrass themselves and meet new people and do weird shit. But it has to go.

I hope you understand. What else are you going to do, anyway? Read the fucking ODT?